Politics in the Gilded Age

Gilded Age politics were characterized by intense competition between Republicans and Democrats and much demographic change.

Gilded Age politics, referred to as the “Third Party System,” were characterized by intense competition between the two parties, with minor parties coming and going, especially on issues of concern to prohibitionists, labor unions, and farmers. The Democrats and Republicans fought over major economic issues and control of offices, which became the rewards for party activists. Voter turnout was very high and often exceeded 80 percent, or even 90 percent in some states, as the parties drilled their loyal members like an army drills its soldiers. Competition was intense and elections were very close. In the Southern states, lingering resentment over the Civil War meant that much of the South would vote Democrat. After the end of Reconstruction in 1877, political competition in the South mainly took place within the Democratic Party. Nationwide voter turnout fell sharply after 1900. 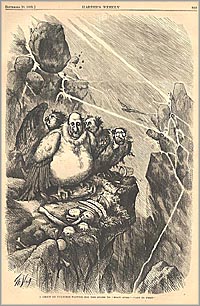 “A Group of Vultures Waiting for the Storm to ‘Blow Over’—’Let Us Prey'”: A cartoon denouncing the corruption of New York’s Boss Tweed and other Tammany Hall figures, drawn in 1871 by Thomas Nast and published in Harper’s Weekly.

Major metropolitan centers underwent rapid population growth, and as a result, had many lucrative contracts and jobs to award. To take advantage of the new economic opportunity, both parties built so-called ” political machines ” to manage elections, reward supporters, and pay off potential opponents. Financed by the ” spoils system,” the winning party distributed most local, state, and national government jobs, and many government contracts, to its loyal supporters. Large cities became dominated by political machines, and constituents supported a candidate in exchange for anticipated patronage. Votes were repaid with favors from the government once a candidate was elected; very often, candidates were selected based on their willingness to play along with the spoils system. Perhaps the largest example of a political machine from this time period is Tammany Hall in New York City, led by Boss Tweed.

The basic campaign strategy was the maximum mobilization of potential votes. To find new supporters, politicians systematically canvassed their communities, talking up the state and national issues of the day, and watching which themes drew the best responses. In such a large, complex, pluralistic nation, the politicians discovered that citizens were especially loyal to their own ethno-religious groups. These groups, furthermore, had distinctive moral perspectives and political needs.

During the Gilded Age, Congress was known for being rowdy and inefficient. It was not unusual to find that a quorum could not be achieved because too many members were drunk or otherwise preoccupied with extra-governmental affairs. The halls of Congress were filled with tobacco smoke and spittoons were everywhere. One disgusted observer noted that not only did the members chew and spit incessantly, but also their aim was bad. The atmosphere on the floor was described as an “infernal din.” The Senate, whose seats were often auctioned off to the highest bidder, was known as a “rich man’s club,” where political favors were traded like horses, and the needs of the people in the working classes lay beyond the vision of those exalted legislators.

During this period, very little serious legislation was passed; between 1875 and 1896, only five major bills made it through Congress to the president’s desk. Even discussion of the graduated income tax, by any definition a revolutionary measure, failed to arouse much interest or public debate.

Corruption reached into Congress with the the Crédit Mobilier of America scandal, and disgraced the White House during the Grant administration. The scandal divided the Republican party into two different factions: the Stalwarts, led by Roscoe Conkling, and the Half-Breeds, led by James G. Blaine. There was a sense that government enabled political machines to intervene in the economy and the resulting favoritism, bribery, inefficiency, waste, and corruption had negative consequences. Accordingly, there were widespread calls for reform, such as the Civil Service Reform led by the Bourbon Democrats and Republican Mugwumps. In 1884, the Democrats won their first national victory since 1856 with the election of Democrat Grover Cleveland to the presidency.

The Bourbon Democrats supported a free-market policy, with low tariffs, low taxes, less spending, and in general, a laissez-faire (hands-off) government. They argued that tariffs made most goods more expensive for the consumer and subsidized the trusts (monopolies). They also denounced imperialism and overseas expansion. In contrast, Republicans insisted that national prosperity depended on industry that paid high wages, and warned that lowering the tariff would be a disaster because goods made by low-wage European factory workers would flood American markets.

Presidential elections were so closely contested between the two major parties that a slight nudge could tip the election, and Congress was marked by political stalemate. With support from Union Army veterans, businessmen, professionals, and craftsmen and larger farmers, the GOP (the Republicans) consistently carried the North in presidential elections. The Democrats, often led by Irish Catholics, had their base among Catholics, poorer farmers, and traditional party members.

Overall, Republican and Democratic political platforms remained remarkably constant during the years before 1900. As the parties developed distinctive positions on issues such as the modernization of the economy and westward expansion, voters found themselves attracted to one side or the other. The Whigs and Republicans aggressively favored modernizing the economy, and supporting banks, railroads, factories, and tariffs, and promised a rich home market in the cities for farm products. The Whigs always opposed expansion, as did the Republicans until 1898. The Democrats, meanwhile, talked of the agrarian virtues of the yeoman farmer and westward expansion, and emphasized how well rural life comported with Jeffersonian values.

Neither Democrats nor Republicans were willing to take strong stands on issues important to the voters. The sectionalism that had been prevalent prior to the Civil War was still alive and well, and with the evenness of political party affiliations, candidates’ personalities were important.

Both parties set up campaign clubs, such as the Wide Awakes, in which young men paraded in torchlight processions wearing special uniforms and holding colorful banners. By the late nineteenth century, the parties in the Midwest combined to turn out more than 90 percent of the eligible electorate in entire states, reaching more than 95 percent in 1896 in Illinois, Indiana, Iowa, Michigan, and Ohio. Some counties passed the 100-percent mark not because of fraud but because the parties tracked people down whom the census missed.

From 1860 to the early 1900s, the Republicans took advantage of the Democrats’ association with “Rum, Romanism, and Rebellion.” “Rum” referred to the liquor interests and the tavern keepers (the GOP, on the other hand, had a strong dry element). “Romanism” referred to Roman Catholics, especially Irish Americans, who ran the Democratic Party in most cities, and whom the reformers denounced for political corruption and the operation of a separate parochial school system. “Rebellion” referred to the Democrats of the Confederacy, who had tried to break the Union in 1861, as well as to their northern allies, called “Copperheads.”

Demographic trends boosted the Democrats’ totals, as the German and Irish Catholic immigrants had become Democrats and outnumbered the English and Scandinavian Republicans. The new immigrants who arrived after 1890 seldom voted at this time. During the 1880s and 1890s, the Republicans struggled against the Democrats’ efforts, winning several close elections and losing two to Grover Cleveland (in 1884 and 1892).

Throughout the nineteenth century, third parties such as the Prohibition Party, Greenback Party, and the Populist Party, evolved from widespread antiparty sentiment and a belief that governance should attend to the public good rather than to partisan agendas. Because this position was based more on social experiences than any political ideology, nonpartisan activity was generally most effective on the local level. As third-party candidates tried to assert themselves in mainstream politics, however, they were forced to betray the antiparty foundations of the movement by allying with major partisan leaders. These alliances, and the factionalism they engendered, discouraged nonpartisan supporters and undermined the third-party movement by the end of the nineteenth century. Many reformers and nonpartisans subsequently lent support to the Republican Party, which promised to attend to issues important to them, such as antislavery or prohibition.