The Marshall Court established the legal authority of the Supreme Court over the states and other branches of the federal government.

Describe the changes John Marshall effected at the Supreme Court

John Marshall (September 24, 1755–July 6, 1835) was chief justice of the Supreme Court from 1801 until 1835. His opinions helped to determine future U.S. constitutional law and made the Supreme Court equal to the legislative and executive branches. Marshall had helped lead the Federalist Party in Virginia, served in the U.S. House of Representatives from 1799 to 1800, and was secretary of state under President John Adams from 1800 to 1801. 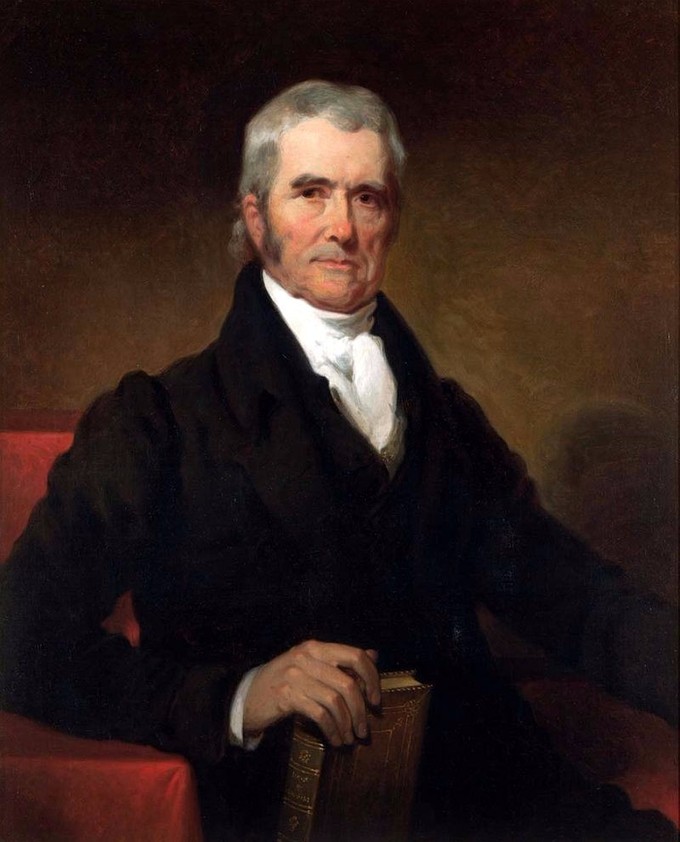 Marshall set a record by dominating the Court for more than three decades, and he played a significant role in the American legal system’s development. He notably reinforced the principle that federal courts were obligated to exercise judicial review and overturn laws that violated the Constitution. Thus, Marshall cemented the position of the U.S. judiciary as an independent, influential branch of government that was the final authority on the Constitution in cases and controversies decided by federal courts. The Marshall Court made several important decisions relating to Federalism, affecting the balance of power between the federal government and the states during the republic’s early years. Marshall repeatedly confirmed the supremacy of federal law over state law and supported an expansive reading of the enumerated powers.

Some of his decisions were unpopular. Nevertheless, Marshall expanded the third branch of the federal government and augmented federal power in the name of the Constitution and the rule of law. Marshall and Daniel Webster (who argued some notable cases) were the leading Federalists of the day. Marshall pursued the Federalist Party goals of building a stronger federal government in opposition to the Jeffersonian Republicans, who wanted stronger state governments.

Marshall was thrust into the office of chief justice in the wake of the 1800 presidential election. With the Federalists about to lose the executive and legislative branches to Democratic-Republicans, President Adams and the lame-duck Congress passed what came to be known as the ” Midnight Judges Act.” This Act reduced the number of justices from six to five, denying Jefferson an appointment until two vacancies occurred. The incumbent Chief Justice Oliver Ellsworth was in poor health, so Adams first offered the seat to ex-Chief Justice John Jay, who declined on the grounds that the Court lacked, “energy, weight, and dignity.” Strapped for time, Adams made an offer to Marshall, who was able to accept the nomination immediately.

The Senate confirmed Marshall on January 27, 1801. Though Marshall officially took office on February 4, he continued to serve as secretary of state until Adams’s term expired on March 4 at the request of the president.

Soon after becoming chief justice, Marshall changed the way the Supreme Court announced its decisions. Previously, each justice would author a separate opinion known as a seriatim opinion. Under Marshall, the Supreme Court adopted the practice of handing down one opinion of the Court. Marshall was almost always the author of this opinion, so he essentially became the Court’s sole spokesman in important cases.

The three previous chief justices (John Jay, John Rutledge, and Oliver Ellsworth) had minimal legacies beyond setting up the forms of office. The Supreme Court, like many state supreme courts, was a minor organ of government. In his 34-year tenure, Marshall gave it the energy and weight of a third co-equal branch. With his associate justices, especially Joseph Story, William Johnson, and Bushrod Washington, Marshall’s Court invigorated many of the constitutional and legal standards of the new nation.

Marshall used Federalist approaches to build a strong federal government over the opposition of the Jeffersonian Democrats, who wanted stronger state governments. His influential rulings reshaped American government, making the Supreme Court the final arbiter of constitutional interpretation. The Marshall Court struck down an act of Congress in only one case (Marbury v. Madison in 1803), but that one instance established the Court as a center of power that could overrule the Congress, the president, the states, and all lower courts if that was what a fair reading of the Constitution required. He also defended the legal rights of corporations by tying them to the individual rights of the stockholders, thereby setting the precedent that corporations have the same level of protection for their property as individuals and shielding corporations from state governments.

The Expansion of the Federal Government

The Supreme Court Under John Marshall

The U.S. Supreme Court under Chief Justice John Marshall played a central role in defining the power of the federal and state governments during the early nineteenth century. The three chief justices prior to Marshall had had little influence on the office or the Supreme Court itself. During his 34-year tenure, however, Marshall gave it the energy and weight of the third, co-equal branch of government. Marshall’s Court shaped the new nation with its interpretation of the Constitution and the establishing of a number of early legal precedents that helped to better define the role and function of the federal government.

Marshall promoted Federalism and the ideas of the Federalist Party—or the idea of a strong central government—over the opposition of the Jeffersonian Republicans, who wanted increased state sovereignty. His influential rulings shaped American government, making the Supreme Court the final arbiter of Constitutional interpretation. 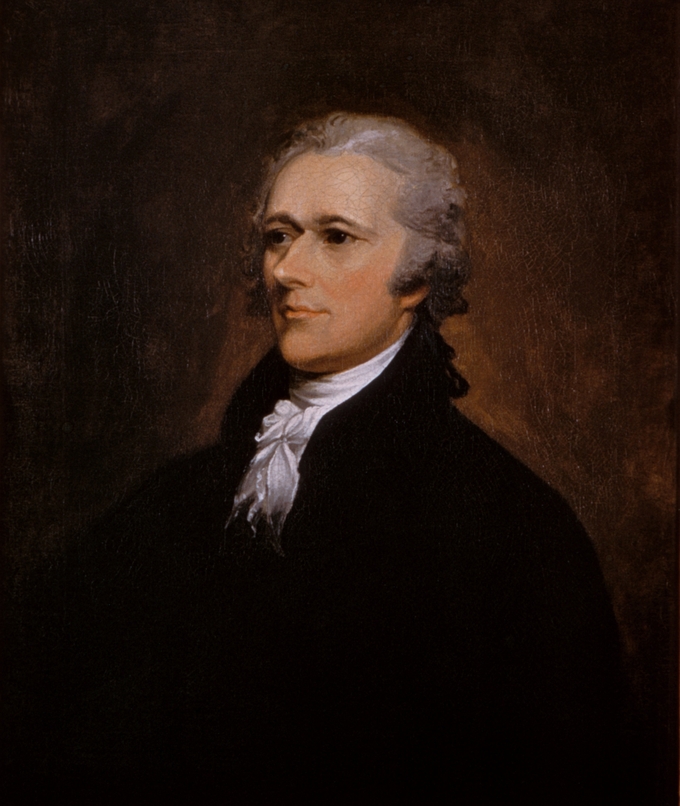 Portrait of Alexander Hamilton by John Trumbull (1806): The expansion of the federal government by the Marshall Court enacted the ideas of Federalist leaders, such as the highly influential Alexander Hamilton.

During his time as chief justice, Marshall ruled in several influential cases that set precedents around issues such as judicial review and federal versus state powers. Because the U.S. Constitution does not specifically delegate certain powers among the federal and state governments, the issue often has fallen to the judicial branch for resolution. In particular, this question arose in the cases McCulloch v. Maryland and Gibbons v. Ogden, both of which broadly expanded the power and supremacy of the national government.

Marbury v. Madison (1803) was a landmark U.S. Supreme Court decision in which the Court established the basis for the exercise of judicial review in the United States under Article III of the Constitution. The landmark decision helped define the power of the judiciary as a co-equal branch of the government, constitutionally separate from the executive and judicial branches.

The case resulted from a petition to the Supreme Court by William Marbury, who had been appointed by President John Adams as justice of the peace in the District of Columbia. Marbury was one of the “midnight judges” appointed by Adams after he’d lost the election of 1800, but prior to the actual inauguration of Thomas Jefferson. Marbury’s appointment was not subsequently delivered to him, so he petitioned the Supreme Court to force Jefferson’s secretary of state, James Madison, to deliver the documents.

The Court, with Marshall as chief justice, found that Marbury did have a right to his appointment, and that the Judiciary Act of 1789 provided him with a remedy known as a writ of mandamus . Nonetheless, the Court stopped short of compelling Madison to hand over Marbury’s appointment, instead holding that the provision of the Judiciary Act of 1789 that gave the Supreme Court original jurisdiction over Marbury’s claim was itself unconstitutional. The petition was therefore denied, but more importantly, the precedent for the Court’s power of judicial review—not specifically enumerated in the Constitution—was established.

This was the only time the Marshall Court would strike down an act of Congress; however, that precedent was enough to establish the Court as a co-equal branch by branding it as the final interpreter of the Constitution. Since the Constitution is the most fundamental law of the country, any government action that the Supreme Court determines to be against the terms of the Constitution is void and nullified. Therefore, in its role as interpreter, the Supreme Court can overrule Congress, the presidents, state governments, and all lower courts.

Gibbons v. Ogden (1824) was a landmark decision in which the Supreme Court held that the power to regulate interstate commerce was granted to Congress by the Commerce Clause of the Constitution. The decision overturned the New York state legislature ‘s monopoly over certain steamships operating between New York and New Jersey. Marshall avoided the issue of exclusivity of federal powers over commerce, claiming it was not essential to the case. Instead, Marshall relied on an existing federal statute for licensing ships in reaching his decision. He held that it was a legitimate exercise of congressional power regulating interstate commerce, and therefore superseded the state law allowing the monopoly. The immediate impact of the Gibbons case resulted in the end of many state-granted monopolies. That, in turn, lowered prices and promoted free enterprise.