The Limits of Prosperity

While the Market Revolution led to many improvements, prosperity in the United States was not without its limits.

The Market Revolution led to rapid expansion in manufacturing, new innovations in technology, and improvements in transportation. At the same time, the rapid expansion of the American economy made it prone to boom-and-bust cycles; it also led to dangerous working conditions and increased tensions between the North and South.

The Market Revolution primarily benefited wealthy planters in the South, industrialists in the North, and bankers and businessmen. Many traditionally skilled and artisanal modes of commerce were made obsolete by the improvements of the Market Revolution. Poor working conditions in factories resulted in demonstrations and organized strikes by workers, prior to the widespread prevalence of unions and organized labor. Mill strikes organized by female factory workers in Lowell, Massachusetts, in 1834 and 1836, while largely unsuccessful, involved upward of 2,000 workers and represented a major organizational effort in the early labor movement. In 1845, the trade union of the Lowell mills sent representatives to speak to the Massachusetts legislature about conditions in the factories, leading to the first governmental investigation into working conditions.

Tensions Between the North and South

The Market Revolution created new regional demarcations in respect to economic specialization. By the 1820s, plantation-style export agriculture dominated in the South, the North was the center of industry and trade, and the West was defined by the expanding frontier. Though these regions have always been interdependent, during this period, their differences became more marked, more significant, and increasingly less compatible. From 1800 to 1860 the North—without slavery —became increasingly industrialized and urbanized. The South, predominantly rural, non-industrial, and reliant on slavery, expanded into rich new lands in the Southwest, from Alabama to Texas.

This era was marked by sectionalism, or loyalty to the interests of a particular region, rather than to the country as a whole. The North and South were divided in terms of their economies, social structures, customs, and political values. Southerners argued that the North that was changing too rapidly and that the South remained true to historic republican values of the Founding Fathers, many of whom owned slaves. The issue of slavery also split the largest religious denominations (the Methodist, Baptist, and Presbyterian churches) into separate Northern and Southern denominations.

Despite the profits realized by bankers, industrialists, and planters who were beneficiaries of the Market Revolution, some individuals’ fates were adversely affected by the improvements in industrialization, communication, and transportation during this period. The United States experienced the first major financial crisis of the early republic during the Panic of 1819. Earlier economic downturns had arisen from international conflicts such as the Embargo Act and the War of 1812, and these downturns had resulted in widespread domestic foreclosures, bank failures, unemployment, and slumps in agriculture and manufacturing. Prior to the Panic of 1819, American bankers, who had little experience with corporate charters, promissory notes, bills of exchange, or stocks and bonds, encouraged a land speculation boom during the first years of the Market Revolution and engaged in irresponsible lending. In the summer of 1818, the national bank managers realized the bank’s massive overextension and instituted a policy of contraction and the calling in of loans. Businesses went bankrupt when they could not meet their debts, and hundreds of thousands of wage workers lost their jobs. 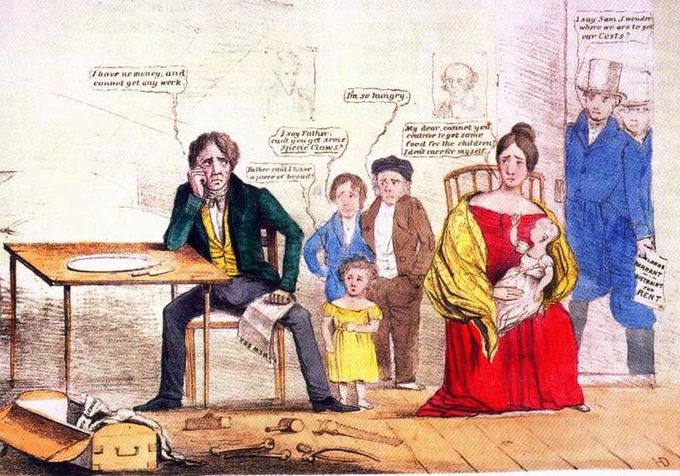 Whig cartoon showing the effects of unemployment: This U.S. Whig poster illustrates unemployment in 1837 through the lens of an American family, whose patriarch sits forlornly at a table while rent collectors enter the door.

Speculative fever once again crippled the U.S. economy in the Panic of 1837. Following a period of runaway inflation, on May 10, 1837, in New York City, banks began to accept payment only in specie (“hard” money of gold and silver coinage), forcing a dramatic, deflationary backlash. The Panic was followed by a five-year depression, resulting in the failure of banks and levels of unemployment which were unprecedented at that time.

Despite their rising numbers, free African Americans in the North faced discrimination and limited opportunity.

During the Market Revolution, slaveholders and the commodity crops of the South had a strong influence on U.S. politics and the country’s economy; for example, New York City’s economy was closely tied to the South through shipping and manufacturing. Though this period saw a rising number of slaves freed in the North and to a much lesser extent the South, African Americans experienced barriers that prevented their full participation in the economy.

As the United States grew, the institution of slavery became more entrenched in the Southern states, even as Northern states began to abolish it. Vermont was the first state to outlaw slavery in its constitution of 1777, and other Northern states followed suit. Either through the language of their state constitutions, court decisions, or gradual emancipation acts, all states north of the Ohio River and the Mason-Dixon Line had outlawed slavery by 1804.

By 1810, 75 percent of African Americans in the North and 13.5 percent of all African Americans in the United States were free. Following this period, fewer slaves were freed as a result of the development of cotton plantations in the Deep South. The invention of the cotton gin in 1793 triggered a huge demand for slave labor to develop new cotton plantations. During a 20-year period, there was a 70 percent increase in the number of slaves in the United States, mostly concentrated in the Deep South. The abolition of the international slave trade in 1808 also increased the demand for domestic slaves.

By 1819, there were exactly 11 free and 11 slave states, which increased sectionalism in the United States. Fears of an imbalance in Congress led to the 1820 Missouri Compromise that divided the Territories along the 36°30′ parallel. Territories seeking statehood above the line would become free states, and those below the line would become slave states. Many politicians believed that this would provide a permanent solution to the vexing question of slavery in the expanding American nation.

African Americans in the North

The system of white supremacy that provided cultural justification of slavery also affected the status of free African Americans, who were perceived as members of an inferior race. Free African Americans could not enter many professional occupations, such as medicine and law, because they were barred from the necessary education. This was also true of occupations that required firearm possession, elective office, or a liquor license. Many of these careers required large capital investments that most free African Americans could not afford. The 1830s saw a significant effort by white communities to oppose black education, coinciding with the emergence of public schooling in northern American society. Public schooling and citizenship were linked together, and because of the ambiguity that surrounded African American citizenship status, African Americans were effectively excluded from public access to universal education.

In 1857, the Supreme Court ruled in the case of Dred Scott v. Sandford. Dred Scott, born a slave in Virginia in 1795, had been one of the thousands forced to relocate as a result of the massive internal slave trade and taken to the slave state of Missouri. In 1820, Scott’s owner took him first to Illinois and then to the Wisconsin territory. However, both of those regions were part of the Northwest Territory, where the 1787 Northwest Ordinance had prohibited slavery. When Scott returned to Missouri, he attempted to buy his freedom. After his owner refused, he sought relief in the state courts, arguing that by virtue of having lived in areas where slavery was banned, he should be free.

In a complicated set of legal decisions, a jury found that Scott, along with his wife and two children, were free. However, on appeal from Scott’s owner, the state Superior Court reversed the decision, and the Scotts remained slaves. Scott then became the property of John Sanford, who lived in New York. He continued his legal battle, and the case was brought to the federal court in 1854 (where Scott lost) and the Supreme Court in 1857.

The Supreme Court—led by Chief Justice Roger Taney—decided Scott remained a slave. The court then went beyond the specific issue of Scott’s freedom to make a sweeping and momentous judgment about the status of African Americans, both free and slave. Per the court, African Americans could never be citizens of the United States. Further, the court ruled that Congress had no authority to stop or limit the spread of slavery into American territories. This proslavery ruling struck a major blow to the African American community and would not be reversed until the Civil Rights Act of 1865. 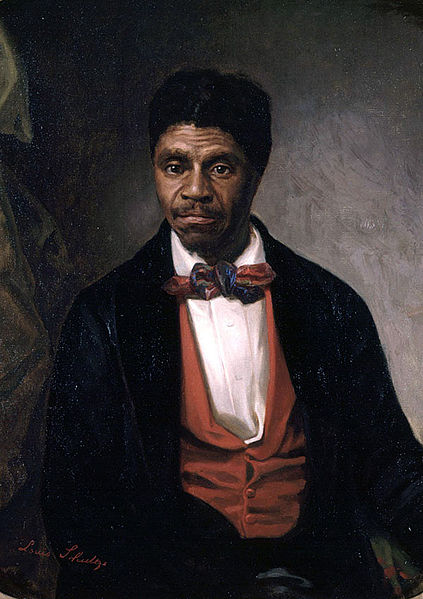