Minorities and the New Deal

Minorities and the New Deal

African Americans and the Great Depression

No other group in the United States suffered as devastating consequences of the Great Depression as African Americans. While overall unemployment reached approximately a quarter of the labor force, for black workers, the rate was well over 50%. Those who were able to find employment were excluded from better paying and more stable professions and usually held menial jobs, for which they were paid lower wages than their white fellow workers. The crisis in agriculture that began long before the onset of the Great Depression also greatly affected African Americans, many of whom still lived off the land, more often as sharecroppers and other tenants than landowners. Segregation was rampant, racial violence common (particularly in the South), and at the time when many white Americans struggled for survival, the struggle of black Americans only intensified.

Franklin Delano Roosevelt’s legacy in respect to black Americans remains ambiguous at best. As the 1932 presidential candidate, he embraced the segregationist stand of the Democratic Party. Already as president, Roosevelt’s many critical decisions were driven by his need to please white Southerners, who held substantial power in Congress. He repeatedly refused to support anti-lynching legislation and ignored the black civil rights struggle. Historians note that the actions that Roosevelt took in support of black communities were often influenced by Eleanor Roosevelt, who continued to push her husband to pay more attention to black leaders and needs of African Americans.

While the New Deal was formally designed to benefit African Americans, some of its flagship programs, particularly those proposed during the First New Deal, either excluded African Americans or even hurt them. For example, the 1933 Agricultural Adjustment Act (AAA) drove many black farmers from the land. As subsidies were paid to (usually white) landlords for not growing certain crops on a part of their land, black (and white) sharecroppers and other tenants were the first victims of the new policy. The evicted farmers were often forced to migrate to northern cities as the southern countryside had no alternative to offer. The 1933 National Recovery Administration, the main First New Deal agency responsible for industrial recovery, had hardly anything to offer to African Americans as the National Industrial Recovery Act’s (NIRA) provisions covered the industries from which black workers were usually excluded. Neither farm nor domestic labor, two sectors where African Americans constituted substantial labor force, were covered under NIRA. Similarly, the original version (later amended) of the 1935 Social Security Act did not provide old-age pensions for farm and domestic workers, which automatically excluded a substantial number of senior African Americans. In the South, that number was nearly 40%.

However, other New Deal programs produced much more positive outcomes for African Americans. The New Deal agenda stipulated that up to 10% of all the programs’ beneficiaries must be African Americans (approximately equal to the rate of the black population in the United States). Black workers participated in all the major programs that created employment, including the Civilian Conservation Corps, the Public Works Administration, and the Works Progress Administration. Under the provisions of the latter, the youth coming from the families that had at least one member working for WPA also received support that allowed them to continue their high school or college education.

African American participation in the New Deal work programs did not change rampant discriminatory practices. Black workers were still delegated to the most menial jobs and largely segregated from white workers. When the economy began to grow as a result of war-related demand, the situation did not alter. Although production intensified and industrial jobs began to mushroom, African American workers still received the lowest pay, held mostly unskilled jobs, and faced hostility from both employers and their white counterparts. In light of the lack of changes under the new economic reality, black leaders intensified their efforts to make sure that this time, African Americans would not be entirely excluded from emerging opportunities.

Under the leadership of A. Philip Randolph, one of the era’s most prominent civil rights activists and the founding president of the Brotherhood of Sleeping Car Porters, a group of civil rights leaders that included Bayard Rustin, Walter White, and A. J. Muste pressured Roosevelt to react to the ongoing discrimination. They demanded what would be truly radical changes, including desegregation of the military and no employment discrimination. Roosevelt did not agree but when Randolph threatened to organize a massive march on Washington to protest discrimination, the president grew willing to negotiate. The march would have hurt the already bad reputation that the United States had in respect to its treatment of African Americans, which would have been particularly harmful at the time of war.

In June 1941, Roosevelt signed Executive Order 8802 (sometimes referred to as the Fair Employment Act). It asserted that companies with government defense contracts could not discriminate on the basis of race, religion, or national origin. The order was intended to help African Americans and other minorities obtain jobs in defense industries during production for World War II. It required federal agencies and departments involved with defense production to ensure that vocational and training programs were administered without discrimination as to “race, creed, color, or national origin.” All defense contracts were to include provisions that barred private contractors from discrimination as well. 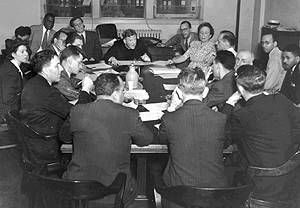 A press conference on the Fair Employment Practices Committee, circa 1942: The FEPC was an agency dedicated to equal opportunity for all races, although it was limited in scope and implementation.

The Fair Employment Practice Committee was established to investigate alleged violations and “to take appropriate steps to redress grievances which it finds to be valid.” The committee would also make recommendations to federal agencies and to the president on how Executive Order 8802 could be made most effective. In 1943, Roosevelt strengthened the FEPC with Executive Order 9346 that required all government contracts to have a non-discrimination clause, authorized 12 regional offices and appropriate staff, and broadened the authority of the agency to federal government agencies. In the private sector, the FEPC was generally successful in enforcing non-discrimination in the North, did not attempt to challenge segregation in the South, and in the border region, its intervention led to hate strikes by white workers. The FEPC was terminated in July 1945.

Executive Order 8802 was the first federal action intended to promote equal opportunity and prohibit employment discrimination in the United States. The president’s statement accompanying the order mentioned the war effort, saying that “the democratic way of life within the nation can be defended successfully only with the help and support of all groups.” He also cited reports of discrimination: “There is evidence available that needed workers have been barred from industries engaged in defense production solely because of considerations of race, creed, color or national origin, to the detriment of workers’ morale and of national unity.” 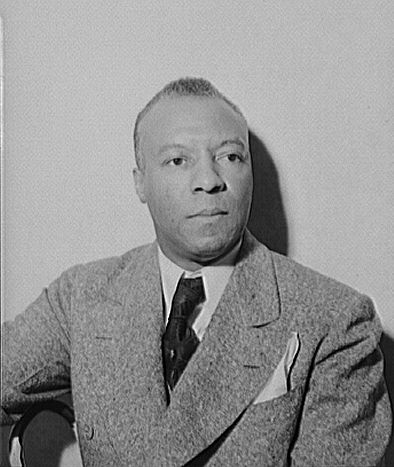 Another critical development that took place during the dominance of New Deal policies was the decision reached by the Maryland Court of Appeals in Murray v. Pearson . In January 1935, Donald Gaines Murray sought admission to the University of Maryland School of Law. His application was rejected because of his race. The rejection letter stated, “The University of Maryland does not admit Negro students and your application is accordingly rejected.” The nation’s oldest black collegiate fraternity, Alpha Phi Alpha, took on the case of Murray v. Pearson i June 1935. By the time the case reached court, Murray was represented by Charles Hamilton Houston and Thurgood Marshall of the Baltimore chapter of the National Association for the Advancement of Colored People (NAACP).

Marshall argued that Maryland failed to provide a “separate but equal” education for Murray as required by the 14th Amendment. Since laws differ from state to state, a law school located in another state could not prepare a future attorney for a career in Maryland. Marshall argued in principle that “since the state of Maryland had not provided a comparable law school for blacks, Murray should be allowed to attend the white university.” He added, “What’s at stake here is more than the rights of my client. It’s the moral commitment stated in our country’s creed.” The circuit court judge ordered Raymond A. Pearson, president of the university, to admit Murray to the law school.

The ruling was appealed to Maryland’s highest court, the Court of Appeals, which unanimously affirmed the lower court’s decision in 1936. The case did not outlaw segregation in education throughout Maryland and was not binding outside of Maryland, but it set an important legal precedent. It also had symbolic significance at the time when African Americans faced discrimination in all aspects of their lives.