Gerald Ford became President of the United States after Richard Nixon resigned. He served from 1974 to 1977.

Examine the controversy of Ford’s pardon of Nixon, and the effect of this controversy on the election of 1976

When President Richard Nixon resigned on August 9, 1974 over the controversy of the Watergate scandal, Vice President Gerald Ford assumed the presidency; this made him the only person to assume the presidency without having been previously voted into either the presidential or vice presidential office. Ford was appointed vice president after Vice President Spiro Agnew resigned in 1973. Immediately after taking the oath of office in the East Room of the White House, he spoke to the assembled audience in a speech broadcast live to the nation. Ford noted the peculiarity of his position: “I am acutely aware that you have not elected me as your president by your ballots, and so I ask you to confirm me as your president with your prayers.”

As president, Ford signed the Helsinki Accords, marking a move toward détente in the Cold War. With the conquest of South Vietnam by North Vietnam nine months into his presidency, U.S. involvement in Vietnam essentially ended. Domestically, Ford presided over arguably the weakest economy since the Great Depression, with growing inflation and a recession during his tenure. During Ford’s incumbency, foreign policy was characterized, in procedural terms, by the increased role Congress began to play, and by the corresponding curb on the powers of the president. In 1976, Ford narrowly defeated Ronald Reagan for the Republican nomination, but lost the presidential election to Democrat Jimmy Carter.

The economy was a great concern during the Ford administration. One of the first acts by the new president to address the economy was the creation of the Economic Policy Board by Executive Order, on September 30, 1974. In response to rising inflation, Ford went before the American public in October 1974 and asked them to “Whip Inflation Now.” As part of this program, he urged people to wear “WIN” buttons.

The federal budget ran a deficit every year Ford was President. Despite his reservations about how the program ultimately would be funded in an era of tight public budgeting, Ford signed the Education for All Handicapped Children Act of 1975, which established special education throughout the United States. Ford expressed “strong support for full educational opportunities for our handicapped children,” according to the official White House press release for the bill signing.

Ford continued the détente policy with both the Soviet Union and China, easing the tensions of the Cold War. Still in place from the Nixon Administration was the Strategic Arms Limitation Treaty (SALT). The thawing relationship brought about by Nixon’s visit to China was reinforced by Ford’s December 1975 return to the communist country. In 1975, the administration entered into the Helsinki Accords with the Soviet Union, creating the framework of the Helsinki Watch, an independent non-governmental organization created to monitor compliance; it later evolved into the Human Rights Watch.

On September 8, 1974, Ford issued Proclamation 4311, which gave Nixon a full and unconditional pardon for any crimes he may have committed against the United States while President. In a televised broadcast to the nation, Ford explained that he felt the pardon was in the best interests of the country, and that the Nixon family’s situation “is a tragedy in which we all have played a part. It could go on and on and on, or someone must write the end to it. I have concluded that only I can do that, and if I can, I must.” When he announced the Nixon pardon, Ford also introduced a conditional amnesty program for Vietnam War draft dodgers who had fled to countries such as Canada. Full pardon, however, did not come about until the Jimmy Carter Presidency.

The Nixon pardon was highly controversial. Critics derided the move and claimed a “corrupt bargain” had been struck between the men. They claimed Ford’s pardon was granted in exchange for Nixon’s resignation, which elevated Ford to the presidency. Regardless, historians believe the controversy was one of the major reasons Ford lost the trust of the public and subsequently lost the election in 1976. Ford’s first press secretary and close friend, Jerald Franklin Horst, resigned his post in protest after President Nixon’s full pardon. Ford also voluntarily appeared before Congress on October 17, 1974, to give sworn testimony—the only time a sitting president has done so— about the pardon.

After Ford lost the reelection and left the White House in 1977, intimates said that the former president privately justified his pardon of Nixon by carrying in his wallet a portion of the text of Burdick v. United States, a 1915 U.S. Supreme Court decision. It stated that a pardon indicated a presumption of guilt, and that acceptance of a pardon was tantamount to a confession of that guilt. In 2001, the John F. Kennedy Library Foundation awarded the John F. Kennedy Profile in Courage Award to Ford for his pardon of Nixon. In presenting the award to Ford, Senator Ted Kennedy said that he had initially been opposed to the pardon of Nixon, but later stated that history had proved Ford to have made the correct decision. 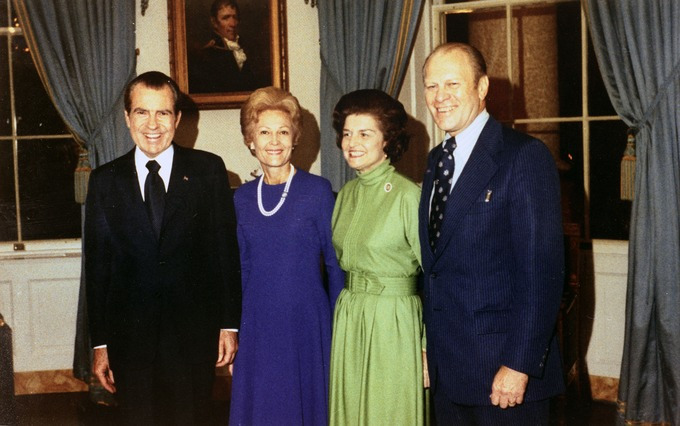 Mr. and Mrs. Ford with Mr. and Mrs. Nixon 1973: Gerald and Betty Ford with the president and First Lady Pat Nixon, after President Nixon nominated Ford to be vice president, October 13, 1973.

The United States presidential election of 1976 followed the resignation of President Richard Nixon, and subsequent inauguration of Vice President Gerald Ford into the presidency, in the wake of the Watergate scandal. It favored the relatively unknown former Democratic Governor of Georgia, Jimmy Carter, against the incumbent Republican President Ford.

The contest for the Republican Party’s presidential nomination in 1976 was between two serious candidates: Gerald Ford, incumbent president and leader of the GOP’s moderate wing, and Ronald Reagan, the leader of the GOP’s conservative wing and the former two-term Governor of California. The presidential primary campaign between the two men was hard-fought and relatively even. By the start of the Republican Convention in August of 1976, the race for the nomination was still too close to call. Ford defeated Reagan by a narrow margin and chose Senator Robert Dole of Kansas as his running mate, in place of incumbent Vice President Nelson Rockefeller. The 1976 Republican Convention was the last political convention to open with the presidential nomination still undecided until the actual balloting at the convention.

Jimmy Carter ran in the Democratic Party as a reformer who was “untainted” by Washington political scandals. Largely unknown in politics at the time, he ran as a “dark horse,” or a little-known person emerging to prominence that seemed unlikely to succeed. Carter ran on an “anti-Washington” ticket, making a virtue of his lack of experience in what was increasingly seen as the corrupt politics of the nation’s capital. Accepting his party’s nomination, the former Governor of Georgia pledged to combat racism and sexism, as well as overhaul the tax structure. He openly proclaimed his faith as a born-again Christian, and promised to change the welfare system and provide comprehensive healthcare coverage for neglected citizens who deserved compassion. Most importantly, Jimmy Carter promised that he would “never lie.”

Because many voters found Carter’s framing attractive in the wake of the Watergate scandal, it ultimately led to Carter’s advantage. Ford, although personally unconnected with Watergate, was seen by many as too close to the discredited Nixon administration; Ford himself provided further support for this opinion when he granted Nixon a presidential pardon for any crimes he might have committed during his term of office. As a result of the pardon, his popularity in public-opinion polls plummeted. Ford’s refusal at the time to publicly explain his reasons for pardoning Nixon only hurt his image more (though he would later offer explanation in his memoirs). His son, Jack Ford, gave an interview in 1976 in which he stated that his father felt that he “(doesn’t) have to prove anything” regarding the pardon of Nixon, and thus did not feel compelled to talk about it.

One of the advantages Ford held over Carter as the general election campaign began was that, as president, he was privileged to preside over events dealing with the United States Bicentennial. This position often resulted in favorable publicity for Ford. The Washington, D.C. fireworks display on the Fourth of July was presided over by the president and televised nationally. On July 7, 1976, the president and first lady served as hosts at a White House state dinner for Queen Elizabeth II and Prince Philip of the United Kingdom, which was televised on the Public Broadcasting Service (PBS) network. These events were part of Ford’s “Rose Garden” strategy to win the election; instead of appearing as a typical politician, Ford presented himself as a “tested leader” who was busily fulfilling the role of national leader and chief executive. Not until October did Ford leave the White House to actively campaign across the nation.

After the Democratic National Convention, Carter held a huge 33-point lead over Ford in the polls. However, as the campaign continued, the race greatly tightened. During the campaign, Playboy magazine published a controversial interview with Carter; in the interview, Carter admitted to having “lusted in my heart” for women other than his wife, which cut into his support among women and evangelical Christians. On September 23, Ford performed well in what was the first televised presidential debate since 1960. Polls taken after the debate suggested most viewers felt that Ford was the winner. Carter was also hurt by Ford’s charges that he lacked the necessary experience to be an effective national leader, and that he was vague on many issues.

The states that ultimately secured Carter’s victory were Wisconsin (at a 1.68% margin) and Ohio (at a.27% margin). Had Ford won these states along with the other states he carried, he would have won the presidency. The 27 states Ford won were, and remain, the most states ever carried by a losing candidate.

Carter was the first Democrat since John F. Kennedy in 1960 to carry the states of the deep south, and the first since Lyndon Johnson in 1964 to carry an unquestionable majority of southern states. Carter performed very strongly in his home state of Georgia, carrying 66.7% of the vote and every county in the state. His 50.1% of the vote was the only time since 1964 that a Democrat managed to obtain a majority of the popular vote in a presidential election, until Barack Obama won about 53% of the vote 32 years later. Carter is one of five Democrats to obtain a majority of the popular vote since the American Civil War, with the others being Samuel Tilden, Franklin Roosevelt, Lyndon Johnson, and Barack Obama.

Had Ford won the election, the provisions of the 22nd amendment would have disqualified him from running in 1980, because he had served more than two years of Nixon’s remaining term. 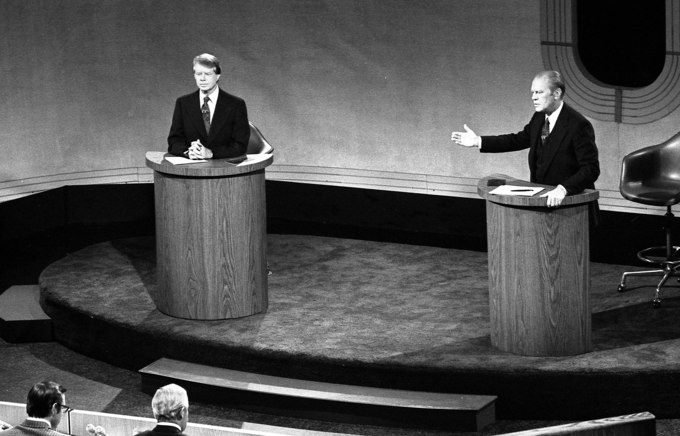 Carter and Ford in a Debate, September 23, 1976: President Gerald Ford and Democratic nominee Jimmy Carter meet at the Walnut Street Theater in Philadelphia to debate domestic policy during the first of the three Ford-Carter Debates.