The Limits of Progressivism

The Limits of Progressivism

Although the Progressive Era was a period of social progress, it also had multiple, contradictory goals that impeded reform efforts.

Describe the impediments that hindered a more robust Progressivist movement

Although the Progressive Era was a period of broad reform movements and social progress, it also was characterized by loose, multiple, and contradictory goals that impeded the efforts of reformers and often pitted political leaders against one another, most drastically in the Republican Party. 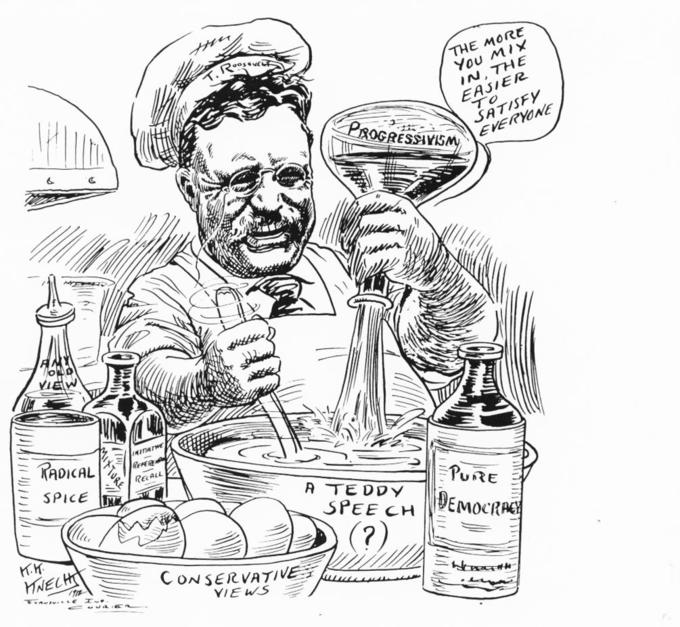 “The Chemist”: Roosevelt is depicted as “concocting a heady brew in his speeches” in this 1912 political cartoon.

For instance, national Progressive leaders such as Theodore Roosevelt argued for increased federal regulation to coordinate big business practices while others, such as Woodrow Wilson, promised to legislate for open competition. At the local, municipal, and state levels, various Progressives advocated for disparate reforms whose concerns ranged as wide as prisons, education, government reorganization, urban improvement, prohibition, female suffrage, birth control, improved working conditions, labor, and child labor. Although significant advancements were made in social justice and reform on a case-by-case basis, there was little local effort to coordinate reformers on a wide platform of issues. Furthermore, despite the Bull Moose Party’s declaration of a Progressive Party platform, the American public viewed it more as a coalition of fervent Roosevelt supporters, rather than any comprehensive party platform that accounted for the range of Progressive concerns.

The Progressive movement was also an exclusive phenomenon that was restricted to the white, Protestant, educated middle class. Racism often pervaded most Progressive reform efforts, as evidenced by the suffrage movement. Specifically, as women campaigned for the vote, most Progressives argued on behalf of female suffrage as a necessary reform to combat the influence of “corrupted” or “ignorant” black voters in the election booth. Civil rights and Progressive reforms were thus mostly exclusionary projects that had little real influence on each other in the early twentieth century.

Finally, many Progressive achievements were frustrated by the federal court system, which struck down laws regulating child labor, and by lack of resources and funds to fully implement social and political plans of reform. As a result, Progressives failed to fully redistribute political power from the hands of political lobbyists, machines, and organized interests.

End of an Era

In addition to internal contradictions that limited the scope and success of Progressives, the movement as a whole lost popular support around the time of World World I. There is much scholarly debate over the end of the Progressive Era.

The politics of the 1920s was unfriendly toward the labor unions and liberal crusaders against business, so many if not most historians who emphasize those themes mark the 1920s as the end of the Progressive Era. Urban cosmopolitan scholars recoiled at the moralism of prohibition and the intolerance of the nativists of the KKK, and denounced the era. However, as Arthur S. Link emphasized, the Progressives did not simply roll over and play dead. Link’s argument for continuity through the twenties stimulated a historiography that found Progressivism to be a potent force. Palmer, pointing to leaders such as George Norris, says, “It is worth noting that Progressivism, whilst temporarily losing the political initiative, remained popular in many western states and made its presence felt in Washington during both the Harding and Coolidge presidencies.” Historians Gerster and Cords argue that, “Since Progressivism was a ‘spirit’ or an ‘enthusiasm’ rather than an easily definable force with common goals, it seems more accurate to argue that it produced a climate for reform which lasted well into the 1920s, if not beyond.”

Historians of women and of youth emphasize the strength of the Progressive impulse in the 1920s. Women consolidated their gains after the success of the suffrage movement, and moved into causes such as world peace, good government, maternal care (the Sheppard-Towner Act of 1921), and local support for education and public health. The work was not nearly as dramatic as the suffrage crusade, but women voted and operated quietly and effectively. Paul Fass, speaking of youth, says, “Progressivism as an angle of vision, as an optimistic approach to social problems, was very much alive.” International influences that sparked many reform ideas likewise continued into the 1920s, as American ideas of modernity began to influence Europe.

There is general agreement that that the Progressive Era was over by 1932, especially since a majority of the remaining Progressives opposed the New Deal.

Progressivism for Whites Only

African Americans, immigrants from Asia, and Native Americans were largely excluded from the focus of Progressive reform.

Discuss how Progressivism left some groups behind

Although many Progressive leaders championed improving the lives of ordinary citizens, not all Americans were included in this protected group. Many leaders had racist and xenophobic attitudes and policies that oppressed marginalized groups at the same time as enacting “Progressive” reforms.

I don’t go so far as to think that the only good Indians are dead Indians, but I believe nine out of ten are, and I shouldn’t like to inquire too closely into the case of the tenth. The most vicious cowboy has more moral principle than the average Indian. Turn three hundred low families of New York into New Jersey, support them for fifty years in vicious idleness, and you will have some idea of what the Indians are. Reckless, revengeful, fiendishly cruel, they rob and murder, not the cowboys, who can take care of themselves, but the defenseless, lone settlers on the plains.

Another Progressive president, Woodrow Wilson, has been criticized by several historians on racial grounds. According to critics, Wilson believed that slavery was wrong on economic labor principles, rather than for moral reasons. They also argue that he idealized the slavery system in the South, viewing masters as patient with “indolent” slaves. While president of Princeton University, Wilson had discouraged blacks from applying for admission, preferring to keep the peace among white students and alumni. Cabinet heads appointed by President Wilson resegregated restrooms and cafeterias in their buildings. Wilson defended his administration’s segregation policy in a July 1913 letter responding to Oswald Garrison Villard, publisher of the New York Evening Post and founding member of the National Association for the Advancement of Colored People (NAACP); Wilson suggested that the segregation removed “friction” between the races.

Progressives repeatedly warned that illegal voting was corrupting the political system. It especially identified big-city bosses, working with saloon keepers and precinct workers, as the culprits in stuffing the ballot box. The solution to purifying the vote included prohibition (designed to close down the saloons), voter registration requirements (designed to end multiple voting), and literacy tests (designed to minimize the number of ignorant voters).

After the end of the Civil War, with the passage of new constitutions, Southern states adopted provisions that caused disenfranchisement of large portions of their populations by skirting U.S. constitutional protections of the Fourteenth and Fifteenth Amendments. While their voter registration requirements applied to all citizens, in practice, they disenfranchised most blacks.

The new provisions of the state constitutions eliminated black voting by law. Secondly, the Democratic legislatures passed Jim Crow laws to assert white supremacy, establish racial segregation in public facilities, and treat blacks as second-class citizens. The landmark court decision in Plessy v. Ferguson (1896) held that “separate but equal” facilities, as on railroad cars, were constitutional. The new constitutions passed numerous Supreme Court challenges. In cases in which a particular restriction was overruled by the Supreme Court in the early twentieth century, states quickly devised new methods of excluding most blacks from voting, such as the white primary. The only competitive contests in Southern states were reduced to Democratic Party primaries.

For the national Democratic Party, the alignment after Reconstruction resulted in a powerful Southern region that was useful for congressional clout. But, prior to President Franklin D. Roosevelt, the Solid South inhibited the national party from fulfilling center-left initiatives. Southerner Woodrow Wilson, one of the two Democrats elected to the presidency between Abraham Lincoln and Franklin D. Roosevelt, was the first Southerner elected after 1856. He benefited from the disenfranchisement of blacks and the crippling of the Republican Party in the South.

These laws stayed in effect throughout the Progressive Era and were not challenged by any of the major reformers.

The AFL and Immigration Restriction

Although racism manifested in many forms throughout the Progressive Era, the American Federation of Labor (AFL) mounted perhaps one of the most organized and concerted efforts of xenophobic legislation against non-white immigration during this period. In its first years, the AFL admitted nearly every laboring group without discrimination. Samuel Gompers, founder of the AFL, opened the Federation to radical and socialist workers and to some semiskilled and unskilled workers. Women, African Americans, and immigrants also joined in small numbers. However, in the 1890s, the Federation shifted its policy and began to organize only skilled workers in craft unions, quickly making it an organization of white men.

The AFL was at its most influential during Woodrow Wilson’s administration. Particularly during World War I, both unions and the government sought cooperation between labor and capital as the best means of rationalizing and increasing American production on behalf of the war effort. 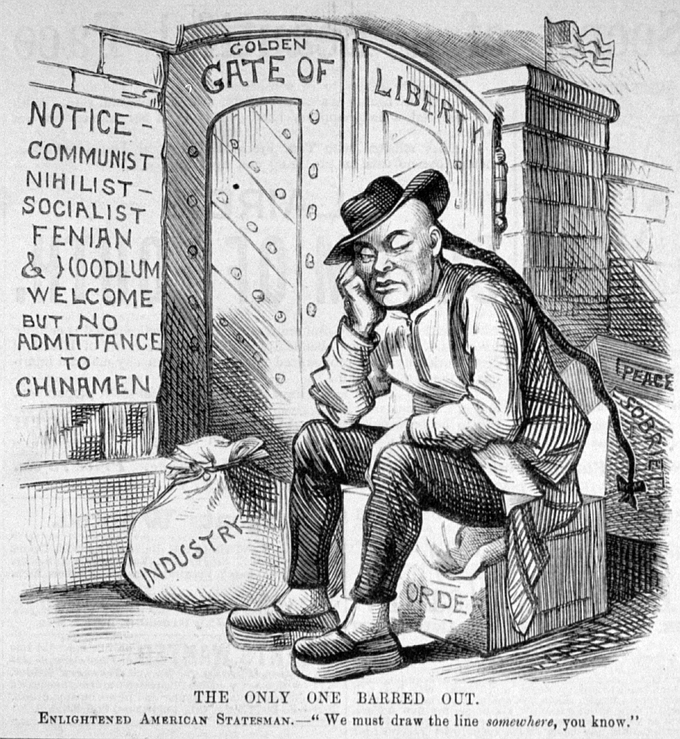 “The Only One Barred Out”: This editorial cartoon shows a Chinese man being excluded from entry to the “Golden Gate of Liberty.” The sign next to the iron door reads, “Notice—Communist, Nihilist, Socialist, Fenian, & Hoodlum welcome. But no admittance to Chinamen.”

This rise in AFL prominence allowed it to not only strictly regulate its own members, but also to influence the development of anti-immigration policy over the course of the early twentieth century. While the AFL preached a policy of egalitarianism in regard to African-American workers, by 1912, it was actively discriminating against them. For instance, the AFL sanctioned the maintenance of segregated locals within its affiliates—particularly in the construction and railroad industries—a practice that often excluded black workers altogether from union membership and thus from employment in organized industries. Generally the AFL viewed women and black workers as competition, as strikebreakers, or as an unskilled labor reserve that kept wages low.

Such racist policies in the AFL did not only apply to African Americans. In 1901, the AFL lobbied Congress to reauthorize the 1882 Chinese Exclusion Act. The Chinese Exclusion Act was a federal law signed by Chester A. Arthur allowing the U.S. to suspend Chinese immigration, a ban that was intended to last 10 years. The AFL also initiated one of the first organized labor boycotts against Chinese immigrant workers, by putting white stickers on the cigars made by unionized white cigar rollers while simultaneously discouraging consumers from purchasing cigars rolled by Chinese workers. By the outbreak of World War I, the AFL vigorously opposed unrestricted immigration and capitalized on the fears of white workers who believed that an influx of unskilled immigrants would flood the labor market and lower wages. As a result, the AFL intensified its opposition to all immigration from Asia and was instrumental in passing and enforcing immigration restriction bills from the 1890s to the 1920s, such as the 1921 Emergency Quota Act and the Immigration Act of 1924.