The Politics of Slavery

While most Northerners were indifferent to slavery or opposed it for economic reasons, a growing number of abolitionists viewed slavery as immoral.

Slavery in the South

In eleven states constituting the American South, slavery was a social and powerful economic institution, integral to the agricultural economy. In the early nineteenth century, the cultivation of a new strain of short staple cotton, coupled with the invention of the cotton gin that made processing the crop easier, created a cotton boom. Slavery quickly became more economically viable on a large scale.

In the decades immediately following the ratification of the Constitution, slavery in the South continued without substantial opposition from the North. Though some in the North viewed slavery as a moral issue, most were indifferent. Some even believed that the abolition of slavery would be detrimental to their economic interests, whether by slowing the supply of slave-produced raw materials from the South or through increased job competition as thousands of freemen flooded the northern markets. Because slavery represented the basis of the southern social and economic system, even those who did not own slaves the South often violently opposed any suggestions for ending the practice, whether through abolition or gradual emancipation.

Many Northerners increasingly criticized slavery as an inefficient labor system, even if they remained indifferent to its moral dimension. While relatively few Northerners favored outright abolition, many more opposed the expansion of slavery into new territories. As territories became states, the existence of slavery there would artificially expand the political power of the slave states in the U.S. Congress.

As the nation expanded in the 1830s and 1840s, the writings of abolitionists—a small but vocal group of Northerners committed to ending slavery—reached a larger national audience. The abolitionist movement in the North was led by social reformers such as free blacks, evangelical reformers, and William Lloyd Garrison, founder of the American Anti-Slavery Society. American abolitionism was accused by many of threatening the harmony between northern and southern states in the Union.

William Lloyd Garrison of Massachusetts distinguished himself as the leader of the abolitionist movement. In the 1830s, he demanded, “immediate emancipation, gradually achieved.” In other words, he demanded that slave owners repent of the sin of slave holding immediately and take steps to emancipate their slaves. He wrote of equal rights and demanded that blacks be treated as equal to whites. Garrison founded the New England Anti-Slavery Society in 1831 and the American Anti-Slavery Society (AASS) in 1833. By 1838, the AASS had 250,000 members, sometimes called “Garrisonians.” 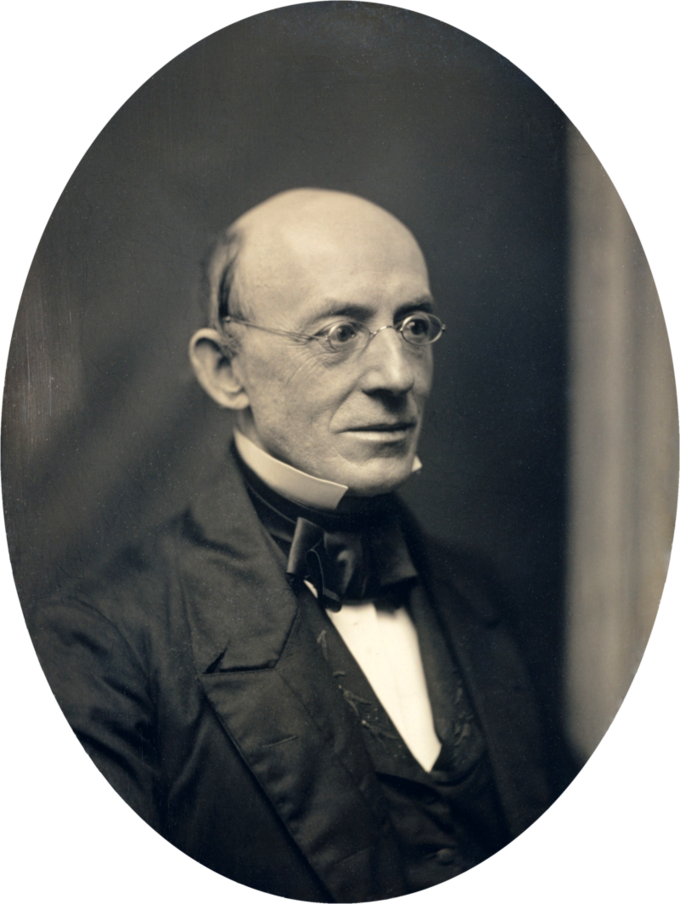 The AASS rejected colonization—the proposal to send free blacks back to the new colony of Liberia in Africa—as a racist scheme and opposed the use of violence to end slavery. Influenced by evangelical Protestantism, Garrison and other abolitionists believed in moral suasion, a technique of appealing to the conscience of the public, especially slaveholders. Moral suasion relied on dramatic narratives, often from former slaves, about the horrors of slavery, and the argument that slavery destroyed families, as children were sold and taken away from their parents. Moral suasion resonated with many women, who condemned the sexual violence against slave women and the victimization of southern white women by adulterous husbands.

Although Garrison rejected the U.S. political system as a tool of slaveholders, other abolitionists believed mainstream politics could bring about their goal, and they helped create the Liberty Party in 1840. Its first candidate was James G. Birney, who ran for president that year. The Liberty Party did not generate much support and remained a fringe third party. Many of its supporters turned to the Free-Soil Party in the aftermath of the Mexican Cession.

White Southerners responded by putting forth arguments in defense of slavery, their way of life, and their honor. In making their defense of slavery, they critiqued wage labor in the North. They argued that the Industrial Revolution had brought about a new type of slavery—wage slavery—and that this form of “slavery” was far worse than the slave labor used on southern plantations. Defenders of the institution also lashed out directly at abolitionists such as Garrison for daring to call into question their way of life. Many white Virginians blamed Garrison for stirring up slaves and instigating slave rebellions such as the one led by Nat Turner.

Beginning in the 1830s, the U.S. postmaster general refused to allow the postal system to carry abolition pamphlets to the South. Northern teachers suspected of abolitionism were expelled from the South, and abolitionist literature was banned. Discussion of slavery-related issues was prohibited on the floor of the U.S. House of Representatives, and those members who dared breach the topic were censured.

The financial crisis of 1837 was based on speculative fever and contributed to a five-year economic depression.

Introduction: The Panic of 1837

The Panic of 1837 was a financial crisis, or market correction, driven by speculative fever. Inflation became rampant after federal deposits to the Second Bank of the United States were withdrawn, based on the assumption that the government was selling land for state bank notes of questionable value. On May 10, 1837, every bank in New York City began to accept payment only in specie (“hard money,” usually in the form of gold and silver coinage), forcing a dramatic, deflationary backlash. The Panic was followed by a five-year economic depression fraught with bank failures and unprecedented unemployment levels.

Growth of the U.S. economy during the Market Revolution produced an upsurge in investment in emerging financial sectors. These speculative investments were frequently made with borrowed funds, resulting in large-scale cycles of boom and bust in the early 1800s.

The tremendous growth in the agricultural sector in the late eighteenth and early nineteenth centuries encouraged land speculation, or the purchasing of land with the expectation that its value would continue to increase. Cotton, at first a small-scale crop in the South, boomed following Eli Whitney ‘s invention of the cotton gin in 1793. Raw cotton from southern plantations was shipped to textile mills in Britain, France, and, by the 1820s, New England. Millions also migrated to fertile farmlands of the Midwest, and new roads and waterways opened up new markets for western farm products.

The U.S. government borrowed heavily to finance the War of 1812, which caused tremendous strain on the banks’ reserves of specie (gold and silver), leading to a suspension of specie payments in 1814. The suspension of the obligation to back transactions with hard currency spurred the establishment of new banks and the expansion of bank-note issues. This inflation of money encouraged unsustainable investments.

The Panic of 1837 was influenced by the economic policies of President Jackson. During his term, Jackson created the Specie Circular by executive order and refused to renew the charter of Second Bank of the United States, leading government funds to be withdrawn from the bank. Jackson was motivated by the concern that the government was selling land for state bank notes of questionable value and that the bank was issuing excessive paper money unbacked by specie reserves.

Martin Van Buren became president in March of 1837, five weeks before the Panic began; he was later blamed for the Panic. Some people argued that Van Buren’s refusal to involve the government in the economy contributed to the Panic’s duration and severity. However, Jacksonian Democrats argued that the Bank had funded rampant speculation and introduced paper-money inflation, and was therefore chiefly responsible for the crisis. The financial crisis of 1837 doomed Van Buren’s reelection in 1840.

Virtually the whole nation felt the effects of the Panic. Connecticut, New Jersey, and Delaware experienced the most stress in their mercantile districts. In 1837, Vermont’s business and credit systems took a hard blow. Vermont had a period of alleviation in 1838 but was hit hard again in 1839 and 1840. New Hampshire was not as affected by the Panic as its neighbors; it had no permanent debt as of 1838 and did not experience significant economic stress during the following years.

Within two months, the losses from the bank failures in New York alone totaled nearly 100 million dollars. Of 850 total banks in the United States, 343 were closed and another 62 partially failed. The entire state bank system had received a colossal shock, which continued to reverberate throughout the country in the ensuing years. In particular, the publishing industry suffered greatly due to the ensuing depression.

Conditions in the South were much worse than the conditions in the Northeast. In Virginia, North Carolina, and South Carolina, the Panic led to increased interest in diversifying crops. New Orleans experienced a general depression in business, and the conditions of its financial market remained negative throughout 1843. Many planters in Mississippi had spent much of their money in advance, leading to their complete bankruptcy. By 1839, many of the plantations were unable to continue cultivation. Florida and Georgia did not feel the effects as early as Louisiana, Alabama, or Mississippi; however, they began to feel the negative effects of the Panic in the 1840s.

The West did not initially feel as much pressure as the North or the South. Ohio, Indiana, and Illinois were agricultural states, and the good crops of 1837 were a relief to farmers. By 1839, however, agricultural prices had fallen and agriculturists felt the pressure.

In 1842, the American economy was able to rebound somewhat and overcome the five-year depression, due in part to the Tariff of 1842. However, according to most accounts, the economy did not fully rebound until 1843. Most economists also agree that there was a brief recovery from 1838 to 1839; that recovery ended as the Bank of England and Dutch creditors raised interest rates. 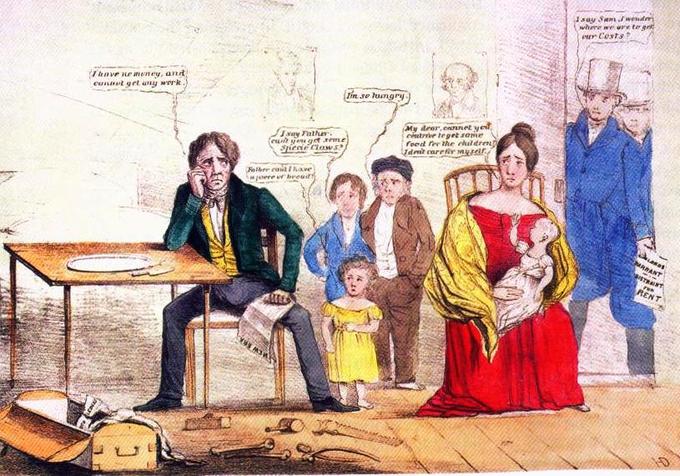 Employment status and satisfaction: Whig cartoons depicted the economic challenges caused by the Panic of 1837. In this cartoon, an unemployed man, unable to provide food for his family, greets a rent collector at his front door. A faint portrait of President Van Buren hangs on the wall.