The War in Europe

The Royal British Navy’s practice of impressment led to increasing tensions between Britain and the United States.

The origins of the War of 1812, often referred to as the Second War of American Independence, are found in the unresolved issues between the United States and Great Britain. One major cause of conflict that remained unresolved by Jay’s Treaty in 1794 was the British practice of impressment, whereby American sailors were taken at sea and forced to fight on British warships. In addition, the British in Canada supported American Indians in their fight against further U.S. expansion in the Great Lakes region. Though Jefferson wanted to avoid what he called “entangling alliances,” staying neutral would eventually prove impossible.

Impressment by the Royal British Navy

Impressment refers to the act of taking men into a navy by force and without notice. Beginning in 1664, the Royal British Navy used this practice in wartime, and during the eighteenth and early nineteenth centuries, impressment allowed the British to crew their warships. Although Britain practiced impressment before, during, and after the American Revolution, it most significantly affected the course of American history in the first decades of the republic.

Jay’s Treaty, which went into effect in 1795, addressed many issues left unresolved after the American Revolution and helped avert a renewed conflict. However, many disapproved of the treaty’s failure to address British impressment of sailors from American ships and ports. While non-British subjects were never impressed, Britain did not recognize naturalized American citizenship and therefore treated anyone born a British subject as British. As a result, the Royal Navy impressed more than 9,000 sailors who claimed American citizenship.

During the United Kingdom’s wars with Revolutionary and Napoleonic France (1793 to 1815), the Royal Navy aggressively reclaimed British deserters on board ships of other nations, both by halting and searching merchant vessels and, in many cases, by searching American port cities. Although this was illegal, Thomas Jefferson ignored the actions to remain on good terms with Britain as he was negotiating to obtain East and West Florida. This changed in 1805, however, when the British began seizing American merchantmen trading with the West Indies, claiming the ships and their cargoes as a prize, and enforcing impressment on the vessels’ crews. This eventually resulted in the blockade of New York Harbor by two British frigates, the HMS Cambrian and the HMS Leander, which provoked public demonstrations. Over the following year, scores of American ships were condemned in admiralty courts and American seamen were impressed with increasing frequency.

The Chesapeake-Leopard Affair was a naval engagement that occurred off the coast of Norfolk, Virginia, on June 22, 1807, between the British warship HMS Leopard and the American frigate USS Chesapeake. The crew of the HMS Leopard pursued, attacked, and boarded the American frigate looking to impress deserters from the Royal Navy. The USS Chesapeake was caught unprepared, and after a short battle involving broadsides from the HMS Leopard, Commander James Barron surrendered his vessel to the British after firing only one shot. Of the four crew members removed from the American vessel and tried for desertion, one was subsequently hanged.

The Chesapeake-Leopard Affair created an uproar among Americans and strident calls for war with Great Britain, but these quickly subsided. President Thomas Jefferson initially attempted to use this widespread attention to diplomatically threaten the British government into settling the matter. However, when British envoys showed no contrition for the Chesapeake-Leopard Affair and delivered proclamations reaffirming impressment, the U.S. Congress backed away from armed conflict.

Jefferson’s political failure to coerce Great Britain led him toward economic warfare in the form of the Embargo of 1807. The festering crisis of impressment and the Chesapeake-Leopard Affair contributed to the eventual outbreak of the War of 1812 and triggered serious diplomatic tensions that helped turn American public opinion against Britain. 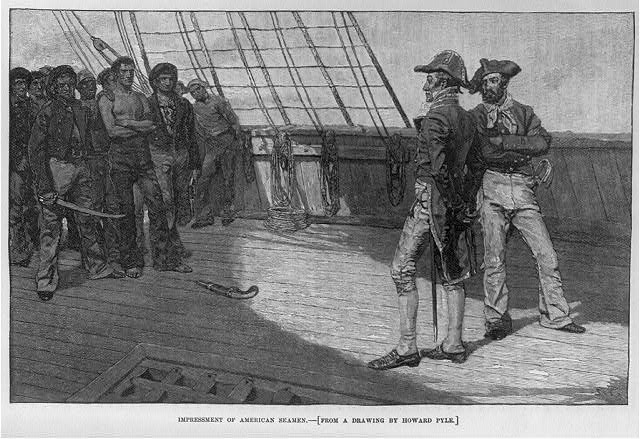 Impressment at sea: A British naval officer looks for deserters among a surly American crew in this 1884 drawing.

Although unsuccessful, the United States pursued an embargo to avoid war and compel Great Britain and France to respect American sovereignty.

The Embargo Act of 1807 was a general embargo enacted by the U.S. Congress prohibiting all foreign commerce. It was primarily directed toward Great Britain and France during the Napoleonic Wars.

The embargo was imposed in response to flagrant violations of U.S. neutrality, in which American merchantmen and their cargoes were seized as contraband of war by the British and French Navies. The British Royal Navy, in particular, resorted to the practice of impressment, forcing thousands of American seamen into service on their warships. Both Great Britain and France, in the midst of a war for control of Europe, justified the plunder of U.S. shipping as incidental to war and necessary for their success. The official orders issued in support of these actions by European powers were widely recognized in the United States as grounds for a U.S. declaration of war.

As these attacks on U.S. merchant ships mounted, President Thomas Jefferson weighed public support for retaliation. He recommended that Congress respond with commercial warfare, rather than with military mobilization. Both Jefferson and Madison viewed war as particularly fatal to republican government, and Jefferson sought to avoid war in favor of what he called “peaceful coercion.” By restricting trade in crucial raw materials, Jefferson hoped to bring the British and French economies and their respective war machines to a halt, after which (he assumed) the European powers would show greater respect for the rights of American shipping. To this end, Jefferson signed the Embargo Act into law on December 22, 1807, after passage by the Republican-dominated Congress.

The embargo, which lasted from December 1807 to March 1809, turned out to be impractical as a coercive measure and was a failure both diplomatically and economically. The legislation inflicted devastating burdens on the U.S. economy and the American people, effectively throttling American overseas trade. All areas of the United States suffered: In commercial New England and the Middle Atlantic states, ships rotted at the wharves, and in the agricultural areas, particularly in the South, farmers and planters could not sell their crops on the international market. For New England, and especially for the Middle Atlantic states, there was some consolation, for the scarcity of European goods stimulated the development of American industry.

At the same time, the British were still able to export goods to America: Initial loopholes overlooked coastal vessels from Canada smuggling goods, whaling ships, and privateers from overseas. Widespread disregard of the law meant enforcement was difficult, and the embargo became a financial disaster for the United States.

The embargo also undermined national unity in the United States, provoking bitter protests, especially in New England commercial centers. The issue vastly increased support for the Federalist Party and led to huge gains in its representation in Congress and in the electoral college in 1808. Thomas Jefferson’s doctrinaire approach to enforcing the embargo violated a key Democratic-Republican precept: commitment to limited government. Many Democratic-Republicans felt that Jefferson’s authorization of heavy-handed enforcement by federal authorities violated both sectional interests and individual liberties.

Despite its unpopular nature, the Embargo Act did have some limited, unintended benefits. For example, fledgling capitalist workers responded by bringing in fresh capital and labor to New England textile and other manufacturing industries, decreasing American reliance on British imports.

After 15 months, the embargo was revoked on March 1, 1809, in the final days of Jefferson’s presidency. It was replaced by the Non-Intercourse Act of 1809, which lifted all embargoes on American shipping except for those bound for British or French ports. The intent was to damage the economies of the United Kingdom and France. Like its predecessor, the Non-Intercourse Act was mostly ineffective and contributed to the outbreak of the War of 1812. 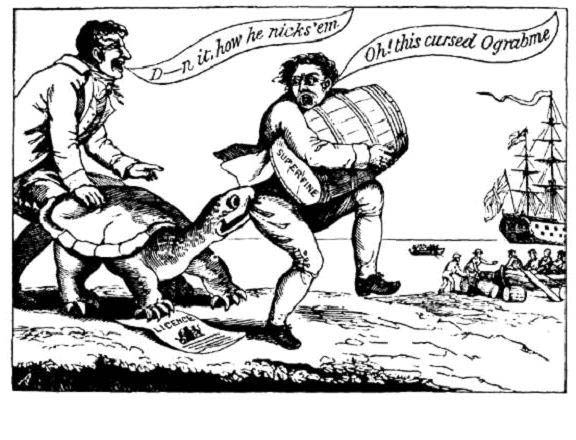 Madison and the Pressure for War

In the early nineteenth century, President James Madison faced pressure from Democratic-Republican “war hawks” to go to war with Britain.

President James Madison, who was elected as Thomas Jefferson ‘s successor in 1808, was pressured by a faction of young Democratic-Republican congressmen from the South and West of the United States to go to war with Great Britain.

The term “war hawks” was a name used for a historical group of Democratic-Republicans in the early nineteenth century who pushed for war with Great Britain. The war hawks were primarily from southern and western states of the United States. The American West then consisted of the trans-Appalachian states of Kentucky, Tennessee, and Ohio, as well as territories in the Old Northwest (i.e., the Great Lakes states that did not yet have votes in Congress).

The term “hawk” was coined by the prominent Virginia congressman and Old Republican, John Randolph (of Roanoke), a staunch opponent to the entry into war. There was never any official roster of war hawks, and no universally acknowledged list exists. Most historians use the term to describe about a dozen members of the Twelfth Congress under President Madison. The primary leaders of the group were Speaker of the House Henry Clay of Kentucky and John C. Calhoun of South Carolina, both of whom would become major players in American politics for the next several decades. Other notable members included Richard Mentor Johnson of Kentucky, William Lowndes and Langdon Cheves of South Carolina, Felix Grundy of Tennessee, and William W. Bibb of Georgia. 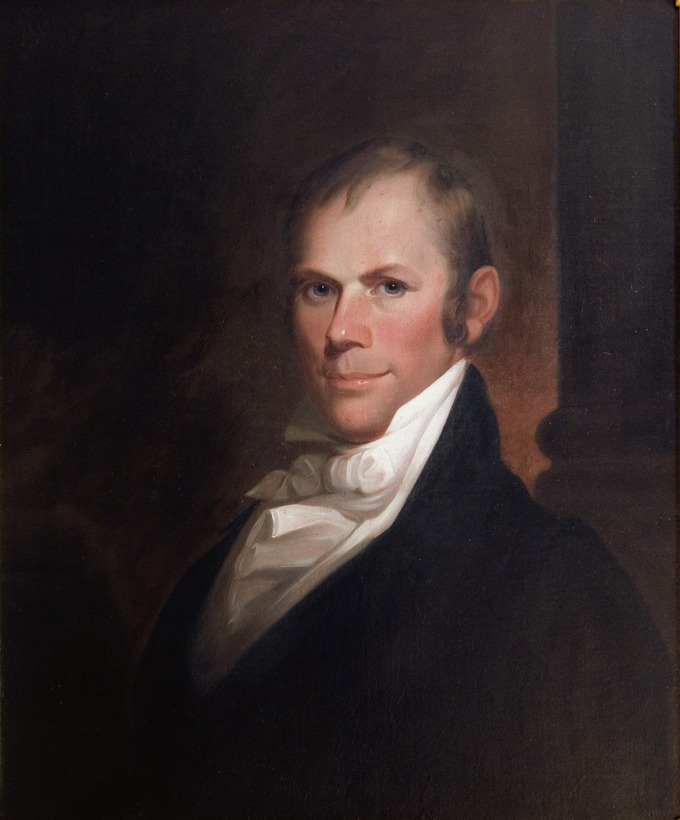 Arguments for Going to War

The war hawks advocated going to war with Britain for reasons related to the interference of the British Royal Navy in American shipping, which was hurting the American economy and, the war hawks believed, injuring American prestige. War hawks from the western states also believed that the British were instigating American Indians on the frontier to attack American settlements, and so the war hawks called for an invasion of British Canada to punish the British and end this threat. War hawks in both the South and the West also anticipated an easy opportunity for increasing the size of the new republic in the event of war: They hoped for the incorporation of British North America (present-day Canada) into the republic.

Opposition to war came from Federalists, especially those in the Northeast, who knew conflict would disrupt the maritime trade on which they depended. The older members of the Democratic-Republican Party, led by President James Madison and Secretary of the Treasury Albert Gallatin, also tried unsuccessfully to defeat the war hawks movement, believing that the United States was not prepared for war—which in the end turned out to be true. In a narrow vote, Congress authorized the president to declare war against Britain in June 1812.