The Financial Crisis of the 1930s

The Great Depression was the longest, deepest, and most widespread depression of the 20th century, put into motion after the devastating stock market crash in 1929 in the United States known as Black Tuesday.

The depression originated in the United States after a major fall in stock prices that began around September 4, 1929, and became worldwide news with the stock market crash of October 29, 1929 (known as Black Tuesday). Between 1929 and 1932, worldwide GDP fell by an estimated 15%. By comparison, worldwide GDP fell by less than 1% from 2008 to 2009 during the Great Recession. Some economies started to recover by the mid-1930s. However, in many countries the negative effects of the Great Depression lasted until the beginning of World War II.

The Great Depression had devastating effects in countries both rich and poor. Personal income, tax revenue, profits, and prices dropped, while international trade plunged by more than 50%. Unemployment in the U.S. rose to 25% and in some countries as high as 33%.

Cities all around the world were hit hard, especially those dependent on heavy industry. Construction was virtually halted in many countries. Farming communities and rural areas suffered as crop prices fell by about 60%. Facing plummeting demand with few alternative sources of jobs, areas dependent on primary sector industries such as mining and logging suffered the most.

The Roaring Twenties, the decade that followed World War I and led to the crash, was a time of wealth and excess. Building on post-war optimism, rural Americans migrated to the cities in vast numbers throughout the decade with the hopes of finding a more prosperous life in the ever-growing expansion of America’s industrial sector. While the American cities prospered, the overproduction of agricultural produce created widespread financial despair among American farmers throughout the decade. This would later be blamed as one of the key factors that led to the 1929 stock market crash.

Despite the dangers of speculation, many believed that the stock market would continue to rise forever. On March 25, 1929, after the Federal Reserve warned of excessive speculation, a mini-crash occurred as investors started to sell stocks at a rapid pace, exposing the market’s shaky foundation.

Selling intensified in mid-October. On October 24 (“Black Thursday”), the market lost 11 percent of its value at the opening bell on very heavy trading. The huge volume meant that the report of prices on the ticker tape in brokerage offices around the nation was hours late, so investors had no idea what most stocks were actually trading for at that moment, increasing panic.

Over the weekend, these events were covered by the newspapers across the United States. On October 28, “Black Monday,” more investors facing margin calls decided to get out of the market, and the slide continued with a record loss in the Dow for the day of 38.33 points, or 13%.

The next day, “Black Tuesday,” October 29, 1929, about 16 million shares traded as the panic selling reached its peak. Some stocks actually had no buyers at any price that day (“air pockets”). The Dow lost an additional 30 points, or 12 percent. The volume of stocks traded on October 29, 1929, was a record that was not broken for nearly 40 years.

On October 29, William C. Durant joined with members of the Rockefeller family and other financial giants to buy large quantities of stocks to demonstrate to the public their confidence in the market, but their efforts failed to stop the large decline in prices. Due to the massive volume of stocks traded that day, the ticker did not stop running until about 7:45 p.m. that evening. The market had lost over $30 billion in the space of two days.

A large crowd gathered at New York’s American Union Bank during a bank run early in the Great Depression.

The two classical competing theories of the Great Depression are the Keynesian (demand-driven) and the monetarist explanations. There are also various heterodox theories that downplay or reject these explanations. The consensus among demand-driven theorists is that a large-scale loss of confidence led to a sudden reduction in consumption and investment spending. Once panic and deflation set in, many people believed they could avoid further losses by keeping clear of the markets. Holding money became profitable as prices dropped lower and a given amount of money bought ever more goods, exacerbating the drop in demand. Monetarists believe that the Great Depression started as an ordinary recession, but the shrinking of the money supply greatly exacerbated the economic situation, causing a recession to descend into the Great Depression.

The stock market crash of October 1929 led directly to the Great Depression in Europe. When stocks plummeted on the New York Stock Exchange, the world noticed immediately. Although financial leaders in England, as in the United States, vastly underestimated the extent of the crisis that would ensue, it soon became clear that the world’s economies were more interconnected than ever. The effects of the disruption to the global system of financing, trade, and production and the subsequent meltdown of the American economy were soon felt throughout Europe.

The Great Depression hit Germany hard. The impact of the Wall Street Crash forced American banks to end the new loans that had been funding the repayments under the Dawes Plan and the Young Plan. The financial crisis escalated out of control and mid-1931, starting with the collapse of the Credit Anstalt in Vienna in May. This put heavy pressure on Germany, which was already in political turmoil.

Some economic studies have indicated that just as the downturn was spread worldwide by the rigidities of the Gold Standard, it was suspending gold convertibility (or devaluing the currency in gold terms) that did the most to make recovery possible.

Every major currency left the gold standard during the Great Depression. Great Britain was the first to do so. Facing speculative attacks on the pound and depleting gold reserves, in September 1931 the Bank of England ceased exchanging pound notes for gold and the pound was floated on foreign exchange markets.

Great Britain, Japan, and the Scandinavian countries left the gold standard in 1931. Other countries, such as Italy and the U.S., remained on the gold standard into 1932 or 1933, while a few countries in the so-called “gold bloc,” led by France and including Poland, Belgium, and Switzerland, stayed on the standard until 1935–36. 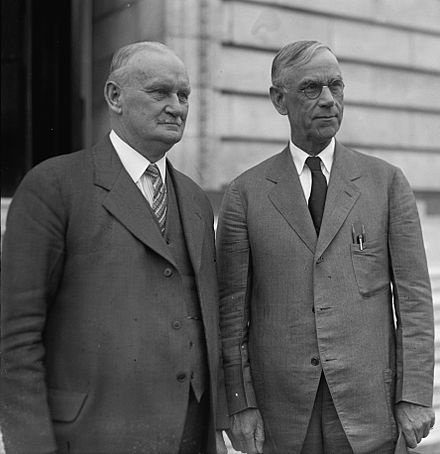