The Scramble for Africa

Liberia is a country in West Africa that was founded, established, colonized, and controlled by citizens of the United States and ex-Caribbean slaves as a colony for former African American slaves and their free black descendants.

Describe what distinguishes Liberia from other African states

Liberia, officially the Republic of Liberia, is a country on the West African coast. Liberia means “Land of the Free” in Latin. It is bordered by Sierra Leone to its west, Guinea to its north, and Côte d’Ivoire to its east. English is the official language and over 20 indigenous languages are spoken, representing the numerous tribes who make up more than 95% of the population. The country’s capital and largest city is Monrovia.

The Republic of Liberia began as a settlement of the American Colonization Society (ACS), who believed blacks would face better chances for freedom in Africa than in the United States. The country declared its independence on July 26, 1847. The U.S. did not recognize Liberia’s independence until during the American Civil War on February 5, 1862. Between January 7, 1822, and the Civil War, more than 15,000 freed and free-born black Americans, who faced legislated limits in the U.S., and 3,198 Afro-Caribbeans relocated to the settlement. The black American settlers carried their culture with them to Liberia. The Liberian constitution and flag were modeled after those of the U.S. On January 3, 1848, Joseph Jenkins Roberts, a wealthy, free-born black American from Virginia who settled in Liberia, was elected as Liberia’s first president after the people proclaimed independence.

Liberia is the only African republic to have self-proclaimed independence without gaining independence through revolt from any other nation, being Africa’s first and oldest modern republic. Liberia maintained and kept its independence during the European colonial era.

Between 1461 and the late 17th century, Portuguese, Dutch, and British traders had contacts and trading posts in the region. The Portuguese named the area Costa da Pimenta (“Pepper Coast”) but it later came to be known as the Grain Coast due to the abundance of melegueta pepper grains. European traders bartered commodities and goods with local people.

In the United States, there was a movement to resettle free-born blacks and freed slaves who faced racial discrimination in the form of political disenfranchisement, and the denial of civil, religious, and social privileges in the United States. Most whites and later a small cadre of black nationalists believed that blacks would face better chances for freedom in Africa than in the U.S. The American Colonization Society (ACS) was founded in 1816 in Washington, DC for this purpose, by a group of prominent politicians and slaveholders. But its membership grew to include mostly people who supported abolition of slavery. Slaveholders wanted to get free people of color out of the South, where they were thought to threaten the stability of the slave societies. Some abolitionists collaborated on relocation of free blacks, as they were discouraged by racial discrimination against them in the North and believed they would never be accepted in the larger society. Most African-Americans, who were native-born by this time, wanted to work toward justice and equality in the United States rather than emigrate. Leading activists in the North strongly opposed the ACS, but some free blacks were ready to try a different environment.

In 1821, the ACA began sending African-American volunteers to the Pepper Coast to establish a colony for freed African-Americans. By 1867, the ACS had assisted in the migration of more than 13,000 African Americans to Liberia. These free African-Americans and their descendants married within their community and came to identify as Americo-Liberians. Many were of mixed race and educated in American culture; they did not identify with the indigenous natives of the tribes they encountered. They intermarried largely within the colonial community, developing an ethnic group that had a cultural tradition infused with American notions of political republicanism and Protestant Christianity.

Reflecting the system of racial segregation in the United States, the Americo-Liberians created a cultural and racial caste system with themselves at the top and indigenous Liberians at the bottom. They believed in a form of “racial equality” which meant that all residents of Liberia had the potential to become “civilized” through western-style education and conversion to Christianity.

On July 26, 1847, the settlers issued a Declaration of Independence and promulgated a constitution. Based on the political principles denoted in the United States Constitution, it established the independent Republic of Liberia.

The leadership of the new nation consisted largely of the Americo-Liberians, who initially established political and economic dominance in the coastal areas that had been purchased by the ACS; they maintained relations with United States contacts in developing these areas and the resulting trade. Their passage of the 1865 Ports of Entry Act prohibited foreign commerce with the inland tribes, ostensibly to “encourage the growth of civilized values” before such trade was allowed. 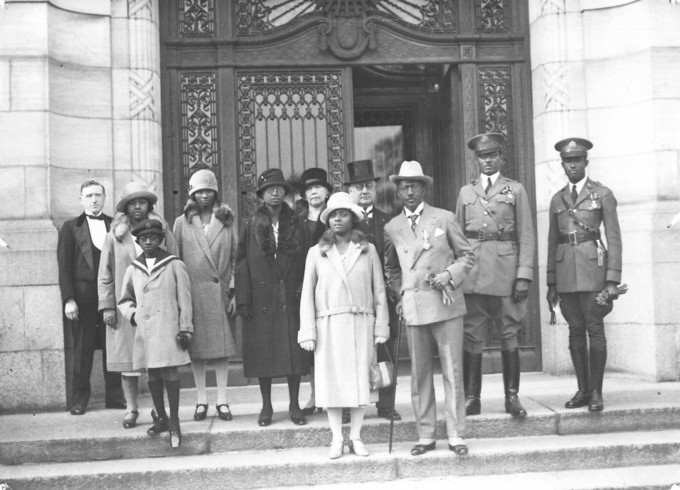 Ethiopia achieved international prestige with its uniquely successful military resistance during the late 19th-century Scramble for Africa, becoming the only African country to defeat a European colonial power and retain its sovereignty.

Explain how Ethiopia managed to maintain its independence

Ethiopia is a country located in the Horn of Africa. Formerly known as Abyssinia, it shares borders with Eritrea to the north and northeast, Djibouti and Somalia to the east, Sudan and South Sudan to the west, and Kenya to the south. Some of the oldest evidence for anatomically modern humans has been found in Ethiopia, widely considered the region from which modern humans first set out for the Middle East and places beyond. Tracing its roots to the 2nd millennium BC, Ethiopia was a monarchy for most of its history. During the first centuries AD, the Kingdom of Aksum maintained a unified civilization in the region, followed by the Ethiopian Empire circa 1137.

Ethiopia was reunified in 1855 under Tewodros II, beginning its modern history. The country slowly modernized under the leadership of Yohannes IV and defended itself from an Egyptian invasion in 1874. Emperor Yohannes fought and won wars against Egyptians, Italians, and Mehadists to keep his people free from foreign invaders. He was killed in action in 1889.

Under Menelik II, Ethiopia defeated an Italian invasion in 1896 and came to be recognized as a legitimate state by European powers. More rapid modernization took place under Menelik II and Haile Selassie, but this did not deter another Italian invasion in 1935. The Italian army occupied parts of the country from October 1935-May 1940. A joint force of British and Ethiopian rebels drove the Italians out of the country in 1941, and Haile Selassie was returned to the throne.

Ethiopia derived prestige from its uniquely successful military resistance during the late 19th-century Scramble for Africa, becoming the only African country to defeat a European colonial power and retain its sovereignty. Subsequently, many African nations adopted the colors of Ethiopia’s flag following their independence. It was the first independent African member of the 20th-century League of Nations and the United Nations.

As the 20th century approached, Africa had been carved up among the European powers at the Berlin Conference. The two independent exceptions were the Republic of Liberia on the west coast and Ethiopia in the eastern Horn of Africa region. The newly unified Kingdom of Italy was a relative newcomer to the imperialist scramble for Africa. Italy had two recently obtained African territories: Eritrea and Italian Somalia. Both were near Ethiopia on the Horn of Africa and both were impoverished. Italy sought to improve its position in Africa by conquering Ethiopia. Menelik II was the Ethiopian leader who pitted Italy against its European rivals while stockpiling weapons to defend Ethiopia against the Italians.

The First Italo-Ethiopian War was fought between Italy and Ethiopia from 1895 to 1896. It originated from a disputed treaty that the Italians claimed turned the country into an Italian protectorate. Much to their surprise, they found that Ethiopian ruler Menelik II, rather than being opposed by some of his traditional enemies, was supported by them. When the Italian army invaded Ethiopia from Italian Eritrea in 1893, they thus faced a more united front than they expected. In addition, Ethiopia was supported by Russia, an orthodox Christian nation like Ethiopia, with military advisers, army training, and the sale of weapons during the war. They were also supported diplomatically by the United Kingdom and France to prevent Italy from becoming a colonial competitor. Full-scale war broke out in 1895, with Italian troops having initial success until Ethiopian troops counterattacked Italian positions and besieged the Italian fort of Meqele, forcing its surrender. Italian defeat came about after the Battle of Adwa, where the Ethiopian army dealt the heavily outnumbered Italians a decisive loss and forced their retreat back into Eritrea. This climactic battle of the First Italo-Ethiopian War was a decisive defeat for Italy and secured Ethiopian sovereignty. As a direct result of the battle, Italy signed the Treaty of Addis Ababa, recognizing Ethiopia as an independent state.

This was not the first African victory over Western colonizers, but it was the first time such a military put a definitive stop to a colonizing nation’s efforts. According to one historian, “In an age of relentless European expansion, Ethiopia alone had successfully defended its independence.”

This defeat of a colonial power and the ensuing recognition of African sovereignty became rallying points for later African nationalists during their struggle for decolonization, as well as activists and leaders of the Pan-African movement. As the Afrocentric scholar Molefe Asante explains,

After the victory over Italy in 1896, Ethiopia acquired a special importance in the eyes of Africans as the only surviving African State. After Adowa, Ethiopia became emblematic of African valor and resistance, the bastion of prestige and hope to thousands of Africans who were experiencing the full shock of European conquest and were beginning to search for an answer to the myth of African inferiority.

Almost 40 years later, in October 1935 after the League of Nations’s weak response to the Abyssinia Crisis, the Italians launched a new military campaign endorsed by Benito Mussolini, the Second Italo-Abyssinian War. This time the Italians employed vastly superior military technology such as tanks and aircraft as well as chemical warfare, and the Ethiopian forces were defeated by May 1936. Following the war, Italy occupied Ethiopia for five years (1936–41), before eventually being driven out during World War II by British and Ethiopian forces. 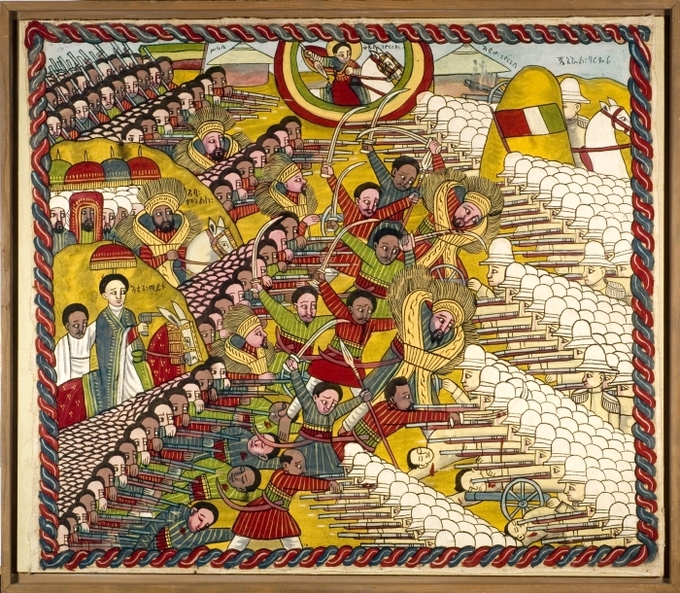