Early Civilizations in the Indian Subcontinent

Expansion and Decline of the Kushan Empire

The Kushan Empire expanded from Greco-Bactrian lands into China and India, until its collapse in 375 CE.

Explain the importance of the Kushan Empire

The Kushan Empire in South Asia originally formed in the early 1st century CE, in the territories of ancient Bactria, around the Oxus River in Central Asia. The Kushans spread from the Kabul River Valley to defeat other Central Asian tribes. These conquests included parts of the northern central Iranian Plateau, once ruled by the Parthian Empire— a major political and cultural power in ancient Iran and Iraq. The Kushans reached their peak under Emperor Kanishka (127-151 CE), a Buddhist whose realm stretched from China to northern and eastern India and parts of Pakistan.

The Kushans were one of five branches of the Yuezhi confederation, an Indo-European nomadic people. The Yuezhi lived in the grasslands of eastern Central Asia’s Tarim Basin, in modern-day Xinjiang, China (possibly speaking varieties of Indo-European languages), until they were driven west by the Xiongnu in 176-160 BCE.

The Yuezhi reached the Greco-Bactrian Kingdom, located in northern Afghanistan and Uzbekistan, around 135 BCE, and displaced the Greek dynasties that resettled to the southeast in areas of the Hindu Kush and the Indus basin, in present-day Afghanistan and Pakistan. The Kushans spread out from Bactria to defeat other Central Asian tribes.

As they wrested territories from the Scythian tribes, the Kushans expanded south into the region traditionally known as Gandhara, establishing the twin capitals Kapisa and Pushklavati, near modern-day Kabul and Peshawar, respectively. During the 1st and early 2nd centuries CE, the Kushans expanded across the northern parts of the Indian subcontinent. Around 152 CE, Emperor Kanishka, a Buddhist, sent his armies north of the Karakoram Mountains to capture additional territories, and subsequently opened a direct road from Gandhara to China that remained under Kushan control for more than a century.

At the height of the dynasty, the Kushans loosely ruled a territory that extended to the Aral Sea through present-day Uzbekistan, Afghanistan, and Pakistan, into northern India. They had diplomatic contacts with the Roman Empire, Sassanid Persia, Aksumite Empire, and Han China. The Kushan Empire linked the seagoing trade of the Indian Ocean with the commerce of the Silk Road, via the Indus Valley, while providing security that encouraged travel across the Khunjerab Pass and facilitated the spread of Mahayana Buddhism to China.

Although philosophy, art, and science developed within its borders, the only textual record we have of the Kushan Empire’s history comes from inscriptions and accounts in other languages, particularly Chinese. The Kushans are believed to have been predominantly practitioners of Zoroastrianism, one of the world’s oldest monotheistic religions founded by the Prophet Zoroaster in ancient Iran approximately 3,500 years ago. Yet, the Kushans also adopted aspects of Buddhist culture and, like the Egyptians, absorbed remnants of the Greek culture of the Hellenistic kingdoms. Kushan emperors represented a wide variety of faiths, including Zoroastrianism, Buddhism, and possibly Saivism, a sect of Hinduism. 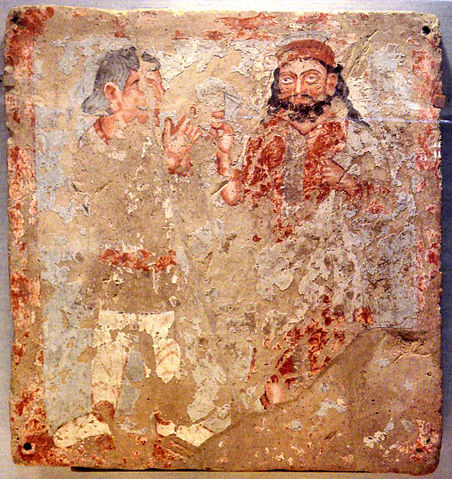 Kushan worshipper with Zeus/Serapis/Ohrmazd, 3rd century CE: The Kushans were influenced by the Hellenistic kingdoms and maintained a wide variety of faiths, including Zoroastrianism, Buddhism, and Hinduism.

After the death of Emperor Vasudeva I in 225, the Kushan Empire split into western and eastern halves. The western Kushans in Afghanistan were soon conquered by the Persian Sassanid Empire. In 248 CE, they were defeated again by Persians, who deposed the western dynasty and replaced them with Persian vassals— cities or kingdoms that forfeited foreign policy independence, in exchange for full autonomy and, in some cases, formal tribute—known as the Indo-Sassanids, or Kushanshas.

The eastern Kushan kingdom was based in the Punjab. Around 270 CE, their territories on the Gangetic Plain became independent under local dynasties, such as the Yaudheyas. In the mid-4th century they were subjugated by the Gupta Empire under its leader, Samudragupta. The last of the Kushan and Sassanian kingdoms were eventually overwhelmed by the Hepthalites, another Indo-European people from the north.