Introduction to the Peloponnesian War

Describe the events of the Peloponnesian War

The Peloponnesian War (431-404 BCE) was fought between Athens and its empire, known as the Delian League, and the Peloponnesian League, led by Sparta. During this conflict, Greek warfare evolved from an originally limited and formalized form of conflict, to all-out struggles between city-states, complete with large-scale atrocities. The Peloponnesian War provided a dramatic end to the 5th century BCE, shattering religious and cultural taboos, devastating vast swathes of countryside, and destroying whole cities. Historians have traditionally divided the war into several different phases.

During the first phase, known as the Archidamian War, Sparta launched repeated invasions of Attica while Athens took advantage of its naval supremacy to raid the Peloponnese coast. Sparta and its allies, with the exception of Corinth, were almost exclusively land-based powers, whereas the Athens empire, though based on a peninsula, had developed impressive naval power. As a result, the two powers were relatively unable to fight decisive battles.The Spartan strategy during the Archidamian War was to invade the land surrounding Athens, depriving Athenians of the productive land around their city. However, Athens maintained access to the sea and did not suffer much from this strategy, though many citizens of Attica abandoned their farms and moved inside the long walls connecting Athens to port Piraeus. 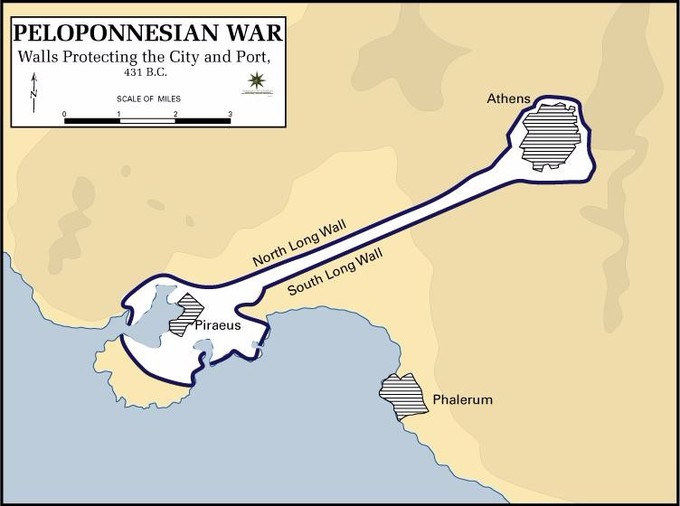 Initially Athens’ strategy, as guided by Pericles, was to avoid open battle with the more numerous, and better trained Spartan hoplites, and to instead rely on Athens’ superior fleet. As a result, Athens’ fleet went on the offensive, winning a victory at Naupactus. Their victory was short-lived, however, because in 430 BCE, an outbreak of plague hit Athens, ravaging the densely packed city and wiping out over 30,000 citizens, sailors, and soldiers, which amounted to roughly one-third to two-thirds of the Athenian population. As a result, Athenian manpower was drastically reduced, and due to widespread fears of plague, foreign mercenaries refused to hire themselves out to Athens. Sparta also abandoned its invasion of Attica during this time, unwilling to risk contact with their diseased enemy.

Pericles and his sons perished as a result of plague, and in the aftermath, Athenians turned against Pericles’s defensive strategy in favor of a more aggressive one that would bring war directly to Sparta and its allies. Initially this strategy met with some success as Athens pursued naval raids throughout the Peloponnese. Their successes allowed them to fortify posts throughout the Peloponnese. One such post was near Pylos, on a tiny island called Sphacteria. It began attracting helot runaways from Sparta, which in turn raised Spartan fears that Athenian activities throughout the Peloponnese would incite a mass helot revolt. As a result, the Spartans were driven into action. During the ensuing conflicts, 300 to 400 Spartans were taken hostage, providing Athens with a bargaining chip.

In return, the Spartans raised an army of allies and helots and marched the length of Greece to the Athenian colony of Amphipolis, which controlled several nearby silver mines. These mines were particularly important because they provided much of the money that financed the Athenian war effort. The capture of this colony provided Sparta a bargaining chip as well, and the two rival city-states agreed to sign a truce, exchanging the Spartan hostages for Amphipolis and its silver mines.

The Peace of Nicias was signed in 421 BCE, concluding the first phase of the war. Due to the loss of war hawks in both city-states during the previous conflict, the peace endured for approximately six years. The treaty was undermined, however, by continued fighting and calls for revolt throughout the Peloponnese. Although the Spartans refrained from such actions themselves, their allies remained vocal, particularly Argos. The Athenian supported the Argives and encouraged them to form a coalition of democratic states within the Peloponnese and separate from Sparta. Early Spartan attempts to thwart such a coalition ultimately failed, and the Argives, their allies, and a small Athenian force moved to seize the city of Tegea, near Sparta.

The Battle of Mantinea was the largest land battle fought within Greece during the Peloponnesian War. The Argive allied coalition initially utilized the sheer strength of their combined forces to score early successes, but failed to capitalize on them, providing the elite Spartan forces opportunities to defeat the coalition and save their city from a strategic defeat. The Argive democratic alliance was broken up, and most members were reincorporated into Sparta’s Peloponnesian League, reestablishing Spartan hegemony throughout the region.

During the 17th year of war, Athens received news that one of their distant allies in Sicily was under attack from Syracuse. The people of Syracuse were ethnically Dorian like the Spartans, and Sicily and their allies, the Athenians, were ethnically Ionian. In 415 BCE, Athens dispatched a massive expeditionary force to attack Syracuse in Sicily. The Athenian force consisted of more than 100 ships, approximately 5,000 infantry, and lightly armored troops. However, their cavalry was limited to about 30 horses, which proved to be no match for the large and highly trained Syracusan cavalry.

Meanwhile, the Syracusans petitioned Sparta for assistance in the matter, and Sparta sent their general, Gylippus, to Sicily with reinforcements. Subsequent Athenian attacks failed and Athens’ entire force was destroyed by 413 BCE.

This ushered in the final phase of the war, known as the Decelean War, or the Ionian War. By this time, Sparta was receiving support from Persia, and Sparta bolstered rebellions in Athens’ Aegean Sea and Ionian subject states, in order to undermine Athens empire. This eventually led to the erosion of Athens’ naval supremacy. The Lacedaemonians were no longer content with simply sending aid to Sicily as a means of supporting their ally. Instead, their focus shifted to an offensive strategy against Athens. As a result, Decelea, a town near Athens, was fortified in order to prevent the Athenians from making use of their land year-round, and to thwart overland shipments of supplies. Nearby silver mines were also disrupted, with Spartan hoplites freeing as many as 20,000 Athenian slaves in the vicinity. Due to this disruption in finance, Athens was forced to demand increased tribute from its subject allies, further increasing tension and the threat of rebellion throughout the Athenian empire.

Members of the Peloponnesian League continued to send reinforcements to Syracuse in hopes of driving off the Athenians, but instead, Athens sent another 100 ships and 5,000 troops to Sicily. Gylippus’s forces, combined with those of the Syracusans, defeated the Athenians on land. The destruction of Athens’ fleet at Aegospotami effectively ended the war, and Athens surrendered a year later in 404 BCE. Corinth and Thebes demanded that Athens be destroyed and all its citizens enslaved, but Sparta refused to destroy a city that had done good service at a time of great danger to Greece, and took Athens into their own alliance system.

Effects of the Peloponnesian War

The Peloponnesian War ended in victory for Sparta and its allies, and led directly to the rising naval power of Sparta. However, it marked the demise of Athenian naval and political hegemony throughout the Mediterranean. The destruction from the Peloponnesian War weakened and divided the Greeks for years to come, eventually allowing the Macedonians an opportunity to conquer them in the mid-4th century BCE.

Democracy in Athens was briefly overthrown in 411 BCE as a result of its poor handling of the Peloponnesian War. Citizens reacted against Athens’ defeat, blaming democratic politicians, such as Cleon and Cleophon. The Spartan army encouraged revolt, installing a pro-Spartan oligarchy within Athens, called the Thirty Tyrants, in 404 BCE. Lysander, the Spartan admiral who commanded the Spartan fleet at Aegospotami in 405 BCE, helped to organize the Thirty Tyrants as a government for the 13 months they maintained power.

During the Thirty Tyrants’ rule, five percent of the Athenian population was killed, private property was confiscated, and democratic supporters were exiled. The Thirty appointed a council of 500 to serve the judicial functions that had formerly belonged to all citizens. Despite all this, not all Athenian men had their rights removed. In fact, 3,000 such men were chosen by the Thirty to share in the government of Athens. These men were permitted to carry weapons, entitled to jury trial, and allowed to reside with the city limits. This list of men was constantly being revised, and selection was most likely a reflection of loyalty to the regime, with the majority of Athenians not supporting the Thirty Tyrants’ rule.

Nonetheless, the Thirty’s regime was not met with much overt opposition for the majority of their rule, as a result of the harsh penalties placed on dissenters. Eventually, the level of violence and brutality carried out by the Thirty in Athens led to increased opposition, stemming primarily from a rebel group of exiles led by Thrasybulus, a former trierarch in the Athenian navy. The increased opposition culminated in a revolution that ultimately overthrew the Thirty’s regime. In the aftermath, Athens gave amnesty to the 3,000 men who were given special treatment under the regime, with the exception of those who comprised the governing Thirty and their associated governmental officials. Athens struggled to recover from the upheaval caused by the Thirty Tyrants in the years that followed.

As a result of the Peloponnesian War, Sparta, which had primarily been a continental culture, became a naval power. At its peak, Sparta overpowered many key Greek states, including the elite Athenian navy. By the end of the 5th century BCE, Sparta’s successes against the Athenian Empire and ability to invade Persian provinces in Anatolia ushered in a period of Spartan hegemony. This hegemonic period was to be short-lived, however.

After the end of the Peloponnesian War, Lysander established many pro-Spartan governments throughout the Aegean. Most of the ruling systems set up by Lysander were ten-man oligarchies, called decarchies, in which harmosts, Spartan military governors, were the heads of the government. Because Lysander appointed from within the ruling classes of these governments, the men were more loyal to Lysander than Sparta, making these Aegean outposts similar to a private empire.

Lysander and Spartan king Agis were in agreement with Corinth and Thebes that Athens should be totally destroyed in the aftermath of the Peloponnesian War, but they were opposed by a more moderate faction, headed by Pausanias. Eventually, Pausanias’ moderate faction gained the upper hand and Athens was spared, though its defensive walls and port fortifications at Piraeus were demolished. Lysander also managed to require Athens to recall its exiles, causing political instability within the city-state, of which Lysander took advantage to establish the oligarchy that came to be known as the Thirty Tyrants. Because Lysander was also directly involved in the selection of the Thirty, these men were loyal to him over Sparta, causing King Agis and King Pausanias to agree to the abolishment of his Aegean decarchies, and eventually the restoration of democracy in Athens, which quickly curbed Lysander’s political influence. 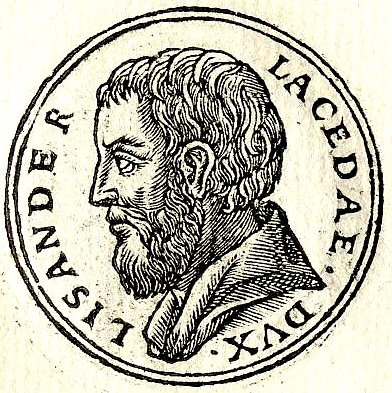 Agesilaus and His Campaigns

Agesilaus II was one of two Spartan kings during the period of Spartan hegemony. Lysander was one of Agesilaus’s biggest supporters, and was even a mentor. During his kingship, Agesilaus embarked on a number of military campaigns in the eastern Aegean and Persian territories. During these campaigns, the Spartans under Agesilaus’s command met with numerous rebelling Greek poleis, including the Thebans. The Thebans, Argives, Corinthians, and Athenians had rebelled during the Corinthian War from 395-386 BCE, and the Persians aided the Thebans, Corinthians, and Athenians against the Spartans.

During the winter of 379/378 BCE, a group of Theban exiles snuck into Thebes and succeeded in liberating it, despite resistance from a 1,500-strong Spartan garrison. This led to a number of Spartan expeditions against Thebes, known as The Boeotian War. The Greek city-states eventually attempted to broker peace, but Theban diplomat Epaminondas angered Agesilaus by arguing for the freedom of non-Spartan citizens within Laconia. As a result, Agesilaus excluded the Thebans from the treaty, and the Battle of Leuctra broke out in 371 BCE; the Spartans eventually lost. Sparta’s international political influence precipitated quickly after their defeat.