The 2001 act was drafted for a world in which limited liability partnerships and limited liability companies can meet many of the needs formerly met by limited partnerships. This Act therefore targets two types of enterprises that seem largely beyond the scope of LLPs and LLCs: (i) sophisticated, manager-entrenched commercial deals whose participants commit for the long term, and (ii) estate planning arrangements (family limited partnerships). The Act accordingly assumes that, more often than not, people utilizing it will want (1) strong centralized management, strongly entrenched, and (2) passive investors with little control over or right to exit the entity. The Act’s rules, and particularly its default rules, have been designed to reflect these assumptions.“Uniform Limited Partnership Act (2001), Prefatory Note,” NCCUSL Archives, http://www.law.upenn.edu/bll/archives/ulc/ulpa/final2001.pdf.

All states except Louisiana adopted the 1976 or 1985 act—most opting for the 1985 version—and sixteen states have adopted the 2001 version. The acts may be properly referred to with a hyphen: “ULPA-1985,” or “ULPA-2001”; the word revised has been dropped. Here, we mainly discuss ULPA-1985. The Uniform Partnership Act (UPA) or the Revised Uniform Partnership Act (RUPA) also applies to limited partnerships except where it is inconsistent with the limited partnership statutes. The ULPA-2001 is not so much related to UPA or RUPA as previous versions were.

A limited partnership (LP) is defined as “a partnership formed by two or more persons under the laws of a State and having one or more general partners and one or more limited partners.”ULPA, Section 102(11). The form tends to be attractive in business situations that focus on a single or limited-term project, such as making a movie or developing real estate; it is also widely used by private equity firms.

Control is not generally shared by both classes of partners.

The control of the limited partnership is in the hands of the general partners, which may—as noted—be partnerships or corporations.

Under ULPA-1985 and its predecessors, a limited partner who exercised any significant control would incur liability like a general partner as to third parties who believed she was one (the “control rule”). However, among the things a limited partner could do that would not risk the loss of insulation from personal liability were these “safe harbors”:

However, see Section 20.3.3 “Limited Liability Limited Partnerships” for how this “control rule” has been abolished under ULPA-2001.

Figure 20.1 The Limited Partnership under ULPA-1985 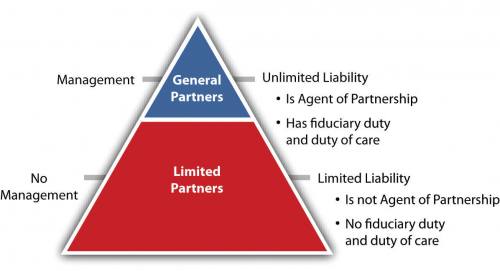 Limited partnership interests may be assigned in whole or in part; if in whole, the assignor ceases to be a partner unless otherwise agreed. An assignment is usually made as security for a loan. The assignee becomes a new limited partner only if all the others consent or if provided for in the certificate; the assignment does not cause dissolution. The happy ease with which a limited partner can divest himself of the partnership interest makes the investment in the firm here more like that in a corporation than in a general partnership.

Limited partners have the right to inspect the firm’s books and records, they may own competing interests, they may be creditors of the firm, and they may bring derivative suits on the firm’s behalf. They may not withdraw their capital contribution if that would impair creditors’ rights.

Unless the partnership agreement provides otherwise (it usually does), the admission of additional limited partners requires the written consent of all. A general partner may withdraw at any time with written notice; if withdrawal is a violation of the agreement, the limited partnership has a right to claim of damages. A limited partner can withdraw any time after six months’ notice to each general partner, and the withdrawing partner is entitled to any distribution as per the agreement or, if none, to the fair value of the interest based on the right to share in distributions.

We noted in discussing partnerships that the partners are not entitled to “compensation,” that is, payment for their work; they are entitled to a share of the profits. For limited partnerships, the rule is a bit different.

Often, general partners are paid for their management work on a sliding scale, receiving a greater share of each dollar of cash flow as the limited partners’ cash distributions rise, thus giving the general partner an incentive to increase limited-partner distributions.

Profits or losses are shared as agreed in the certificate or, if there is no agreement, in accordance with the percentages of capital contributions made.

Liability is not shared.

Assuming the limited partnership meets a minimum number of criteria related to limited liability, centralized management, duration, and transferability of ownership, it can enjoy the benefits of pass-through taxation; otherwise it will be taxed as a corporation. Pass-through (“conduit”) taxation is usually very important to partners.

The limited partnership’s termination involves the same three steps as in a general partnership: (1) dissolution, (2) winding up, and (3) termination.

Dissolution of a limited partnership is the first step toward termination (but termination does not necessarily follow dissolution). The limited partners have no power to dissolve the firm except on court order, and the death or bankruptcy of a limited partner does not dissolve the firm. The following events may cause dissolution: (1) termination of the partnership as per the certificate’s provisions; (2) termination upon an event specified in the partnership agreement; (3) the unanimous written consent of the partners; (4) the withdrawal of a general partner, unless at least one remains and the agreement says one is enough, or if within ninety days all partners agree to continue; (5) an event that causes the business to be illegal; and (6) judicial decree of dissolution when it is not reasonable to carry on. If the agreement has no term, its dissolution is not triggered by some agreed-to event, and none of the other things listed cause dissolution.

Dissolution requires the filing of a certificate of cancellation with the state if winding up commences.

It is worth reiterating the part about “unless otherwise agreed”: people who form any kind of a business organization—partnership, a hybrid form, or corporations—can to a large extent choose to structure their relationship as they see fit. Any aspect of the company’s formation, operation, or ending that is not included in an agreement flops into the default provisions of the relevant law.