The Nature and Regulation of Real Estate and the Environment

In property law, an estate is an interest in real property, ranging from absolute dominion and control to bare possession. Ordinarily when we think of property, we think of only one kind: absolute ownership. The owner of a car has the right to drive it where and when she wants, rebuild it, repaint it, and sell it or scrap it. The notion that the owner might lose her property when a particular event happens is foreign to our concept of personal property. Not so with real property. You would doubtless think it odd if you were sold a used car subject to the condition that you not paint it a different color—and that if you did, you would automatically be stripped of ownership. But land can be sold that way. Land and other real property can be divided into many categories of interests, as we will see. (Be careful not to confuse the various types of interests in real property with the forms of ownership, such as joint tenancy. An interest in real property that amounts to an estate is a measure of the degree to which a thing is owned; the form of ownership deals with the particular person or persons who own it.) 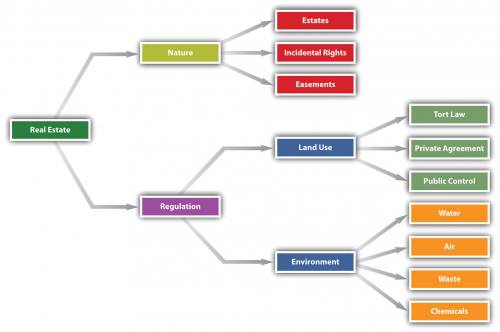 The common law distinguishes estates along two main axes: (1) freeholds versus leaseholds and (2) present versus future interests. A freehold estate is an interest in land that has an uncertain duration. The freehold can be outright ownership—called the fee simple absolute—or it can be an interest in the land for the life of the possessor; in either case, it is impossible to say exactly how long the estate will last. In the case of one who owns property outright, her estate will last until she sells or transfers it; in the case of a life estate, it will last until the death of the owner or another specified individual. A leasehold estate is one whose termination date is usually known. A one-year lease, for example, will expire precisely at the time stated in the lease agreement.

The strongest form of ownership is known as the fee simple absolute (or fee simple, or merely fee). This is what we think of when we say that someone “owns” the land. As one court put it, “The grant of a fee in land conveys to the grantee complete ownership, immediately and forever, with the right of possession from boundary to boundary and from the center of the earth to the sky, together with all the lawful uses thereof.”Magnolia Petroleum Co. v. Thompson, 106 F.2d 217 (8th Cir. 1939). Although the fee simple may be encumbered by a mortgage (you may borrow money against the equity in your home) or an easement (you may grant someone the right to walk across your backyard), the underlying control is in the hands of the owner. Though it was once a complex matter in determining whether a person had been given a fee simple interest, today the law presumes that the estate being transferred is a fee simple, unless the conveyance expressly states to the contrary. (In her will, Lady Gaga grants her five-thousand-acre ranch “to my screen idol, Tilda Swinton.” On the death of Lady Gaga, Swinton takes ownership of the ranch outright in fee simple absolute.)

Not every transfer of real property creates a fee simple absolute. Some transfers may limit the estate. Any transfer specifying that the ownership will terminate upon a particular happening is known as a fee simple defeasible. Suppose, for example, that Mr. Warbucks conveys a tract of land “to Miss Florence Nightingale, for the purpose of operating her hospital and for no other purpose. Conveyance to be good as long as hospital remains on the property.” This grant of land will remain the property of Miss Nightingale and her heirs as long as she and they maintain a hospital. When they stop doing so, the land will automatically revert to Mr. Warbucks or his heirs, without their having to do anything to regain title. Note that the conveyance of land could be perpetual but is not absolute, because it will remain the property of Miss Nightingale only so long as she observes the conditions in the grant.

An estate measured by the life of a particular person is called a life estate. A conventional life estate is created privately by the parties themselves. The simplest form is that conveyed by the following words: “to Scarlett for life.” Scarlett becomes a life tenant; as such, she is the owner of the property and may occupy it for life or lease it or even sell it, but the new tenant or buyer can acquire only as much as Scarlett has to give, which is ownership for her life (i.e., all she can sell is a life estate in the land, not a fee simple absolute). If Scarlett sells the house and dies a month later, the buyer’s interest would terminate. A life estate may be based on the life of someone other than the life tenant: “to Scarlett for the life of Rhett.”

Some life estates are created by operation of law and are known as legal life estates. The most common form is a widow’s interest in the real property of her husband. In about one-third of the states, a woman is entitled to dower, a right to a percentage (often one-third) of the property of her husband when he dies. Most of these states give a widower a similar interest in the property of his deceased wife. Dower is an alternative to whatever is bequeathed in the will; the widow has the right to elect the share stated in the will or the share available under dower. To prevent the dower right from upsetting the interests of remote purchasers, the right may be waived on sale by having the spouse sign the deed.

The transferor need not keep the reversion interest for himself. He can give that interest to someone else, in which case it is known as a remainder interest, because the remainder of the property is being transferred. Suppose the transferor conveys land with these words: “to Scarlett for life and then to Rhett.” Scarlett has a life estate; the remainder goes to Rhett in fee simple absolute. Rhett is said to have a vested remainder interest, because on Scarlett’s death, he or his heirs will automatically become owners of the property. Some remainder interests are contingent—and are therefore known as contingent remainder interests—on the happening of a certain event: “to my mother for her life, then to my sister if she marries Harold before my mother dies.” The transferor’s sister will become the owner of the property in fee simple only if she marries Harold while her mother is alive; otherwise, the property will revert to the transferor or his heirs. The number of permutations of reversions and remainders can become quite complex, far more than we have space to discuss in this text.