What’s the value of gold? 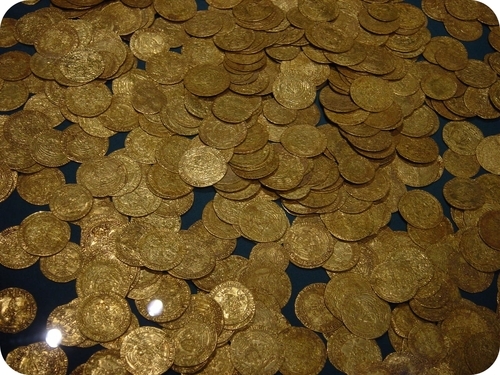 One area of technology that was common to all the societies we have mentioned was metallurgy.  Useful tools could be made that would last a long time.  Weapons could stay sharp longer with improved metals.  Precious metals such as gold and silver could be refined and used for jewelry or for money.  Because it was fairly rare, gold was considered to be very valuable and became a common means of paying for goods and services.

But mining for gold is a slow, dirty, and dangerous process.  Not everyone owns a gold mine – in both the ancient Egyptian society and during the Roman Empire, the gold mines were the property of the state, not an individual or group.  So there were few ways for most people to legally get any gold for themselves.

The alchemists were a varied group of scholars and charlatans whose goal was two-fold: to create the Philosopher’s Stone (which caused the transmutation of lead into gold) and the discovery of the Elixir of Life (bestowing immortality on the person who possessed it).  The origin of the term “ alchemy ” is uncertain.  There are roots to Greek, Arabic, and ancient Egyptian words.  Three major streams of alchemy are known – Chinese, Indian, and European, with all three streams having some factors in common.  We will not focus on the philosophical or religious aspects of alchemy, but will look briefly at the techniques developed in the European stream that ultimately influenced the development of the science of chemistry.

Many of the specific approaches that alchemists used when they tried changing lead into gold are vague and unclear.  Each alchemist had his own code for recording his data.  The processes were kept secret so others could not profit from them.  Different scholars developed their own set of symbols as they recorded the information they came up with.  Many alchemists were not very honest, taking money from a nobleman by claiming to be able to make gold from lead, then leaving town in the middle of the night.  Sometimes the nobleman would detect the fraud and have the alchemist hung.  By the 1300s, several European rulers had declared alchemy to be illegal and set out strict punishments for those practicing the alchemical arts.

However, out of all this secrecy came several contributions to modern-day chemistry.  Early acids and bases were discovered.  Glassware for running chemical reactions was developed.  Alchemy helped improve the study of metallurgy and the extraction of metals from ores.  More systematic approaches to research were being developed, although the idea of orderly scientific experimentation had not become well-established yet.  But the groundwork was laid to the development of chemistry as a foundational science.

The alchemists were never successful in changing lead into gold.  But modern nuclear physics can accomplish this task.  Lead is subjected to nuclear bombardment in a particle accelerator.  A small amount of gold can be obtained by this process. However, the cost of the procedure is far more than the amount of gold obtained.  So the dream of the alchemists has never (and will never) come true.

Answer the following questions using information from this link: