Bohr’s model of the atom was valuable in demonstrating how electrons were capable of absorbing and releasing energy and how atomic emission spectra were created. However, the model did not really explain why electrons should exist only in fixed circular orbits rather than being able to exist in a limitless number of orbits all with different energies. In order to explain why atomic energy states are quantized, scientists needed to rethink the way in which they viewed the nature of the electron and its movement.

Planck’s investigation of the emission spectra of hot objects and the subsequent studies into the photoelectric effect had proven that light was capable of behaving both as a wave and as a particle. It seemed reasonable to wonder if electrons could also have a dual wave-particle nature. In 1924, French scientist Louis de Broglie (1892–1987) derived an equation that described the wave nature of any particle. Particularly, the wavelength (λ) of any moving object is given by:

Apply the de Broglie wave equation [latex]\displaystyle\lambda=\frac{h}{mv}[/latex] to solve for the wavelength of the moving electron.

This very small wavelength is about 1/20th of the diameter of a hydrogen atom. Looking at the equation, as the speed of the electron decreases, its wavelength increases. The wavelengths of everyday large objects with much greater masses should be very small.

If we were to calculate the wavelength of a 0.145 kg baseball thrown at a speed of 40 m/s, we would come up with an extremely short wavelength on the order of 10−34 m. This wavelength is impossible to detect even with advanced scientific equipment. Indeed, while all objects move with wavelike motion, we never notice it because the wavelengths are far too short. On the other hand, particles with measurable wavelengths are all very small. However, the wave nature of the electron proved to be a key development in a new understanding of the nature of the electron. An electron that is confined to a particular space around the nucleus of an atom can only move around that atom in such a way that its electron wave “fits” the size of the atom correctly. This means that the frequencies of electron waves are quantized. Based on the E = hv equation, the quantized frequencies means that electrons can only exist in an atom at specific energies, as Bohr had previously theorized. 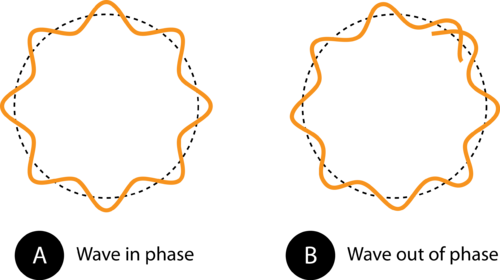 Use the link below to practice calculations using the deBroglie wave equation: