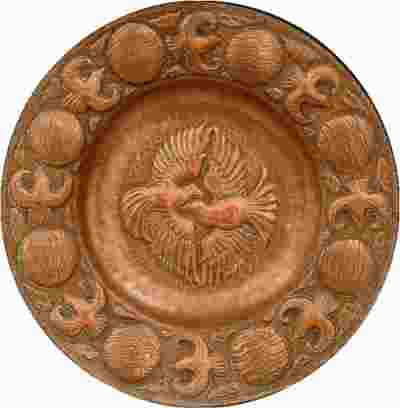 Why do metals behave the way they do?

The image above is of a copper plate that was made in 1893.  The utensil has a great deal of elaborate decoration and the item is very useful.  What would have happened if we decided that copper (I) chloride was just as good a material (well, it does have copper in it).  The CuCl would end up as a powder when we pounded on it to shape it.  Metals behave in unique ways. The bonding that occurs in a metal is responsible for its distinctive properties: luster, malleability, ductility, and excellent conductivity.

Pure metals are crystalline solids, but unlike ionic compounds, every point in the crystal lattice is occupied by an identical atom.  The electrons in the outer energy levels of a metal are mobile and capable of drifting from one metal atom to another.  This means that the metal is more properly viewed as an array of positive ions surrounded by a sea of mobile valence electrons.  Electrons which are capable of moving freely throughout the empty orbitals of the metallic crystal are called delocalized electrons (see Figure below ).  A metallic bond is the attraction of the stationary metal cations to the surrounding mobile electrons. 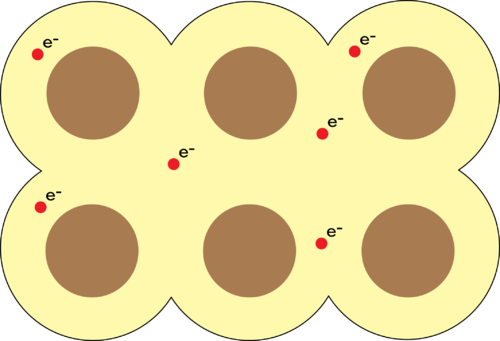 In a metal, the stationary metal cations are surrounded by a sea of mobile valence electrons that are not associated with any one cation.

The metallic bonding model explains the physical properties of metals.  Metals conduct electricity and heat very well because of their free-flowing electrons.  As electrons enter one end of a piece of metal, an equal number of electrons flow outward from the other end.  When light is shone on to the surface of a metal, its electrons absorb small amounts of energy and become excited into one of its many empty orbitals.  The electrons immediately fall back down to lower energy levels and emit light.  This process is responsible for the high luster of metals.

The American Platinum Eagle is the official platinum bullion coin of the United States and was first minted in 1997. The luster of a metal is due to its metallic bonds.

Recall that ionic compounds are very brittle.  Application of a force results in like-charged ions in the crystal coming too close to one another, causing the crystal to shatter.  When a force is applied to a metal, the free-flowing electrons can slip in between the stationary cations and prevent them from coming in contact.  Imagine ball bearings that have been coated with oil sliding past one another.  As a result, metals are very malleable and ductile . They can be hammered into shapes, rolled into thin sheets, or pulled into thin wires.