What do you do with your leftovers? 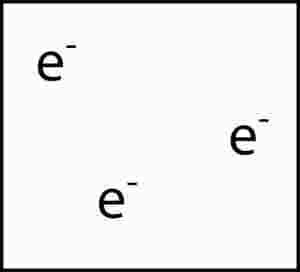 When working with covalent structures, it sometimes looks like you have leftover electrons. You apply the rules you learned so far and there are still some electrons hanging out there unattached. You can’t just leave them there. So where do you put them?

Some molecules are not able to satisfy the octet rule by making only single covalent bonds between the atoms. Consider the compound ethene, which has a molecular formula of C 2 H 4 . The carbon atoms are bonded together, with each carbon also being bonded to two hydrogen atoms.

If the Lewis electron dot structure was drawn with a single bond between the carbon atoms and with the octet rule followed, it would look like this:

This Lewis structure is incorrect because it contains a total of 14 electrons. However, the Lewis structure can be changed by eliminating the lone pairs on the carbon atoms and having the share two pairs instead of only one pair.

Figure 3. (A) The structural model for C2H4 consists of a double covalent bond between the two carbon atoms and single bonds to the hydrogen atoms. (B) Molecular model of C2 H4.

Each nitrogen atom follows the octet rule with one lone pair of electrons and six electrons that are shared between the atoms.

Read the material at the link below and take the quiz (Test Bite).