What is this pan used for? 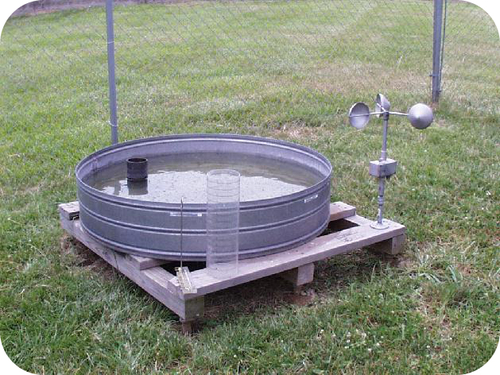 Water loss to the atmosphere is a significant problem in many parts of the world.  When water supplies are low, anything that can be done to decrease water loss is important for farmers.  An evaporation pan (seen above) can be used to measure how fast water evaporates in a given location.  This information can be used as part of projects to develop ways to cut down on evaporation and increase the amount of usable water in a region.

Water has a high surface tension (attraction between molecules at the surface of a liquid) because of its hydrogen bonding.  Liquids that cannot hydrogen bond do not exhibit nearly as much surface tension.  Surface tension can be seen by the curved meniscus that forms when water is in a thin column such as a graduated cylinder or a buret.

Figure 1. The meniscus of water in a graduated cylinder forms because of water’s hydrogen bonding. Image by Peter Witkop, 2014. http://www.shutterstock.com.

The vapor pressure of a liquid is the pressure of the vapor produced by evaporation of a liquid or solid above the liquid or solid in a closed container. The hydrogen bonding between liquid water molecules explains why water has an unusually low vapor pressure.  Relatively few molecules of water are capable of escaping the surface of the liquid and enter the vapor phase.  Evaporation is slow and thus the vapor exerts a low pressure in a closed container.  Low vapor pressure is an important physical property of water, since lakes, oceans, and other large bodies of water would all tend to evaporate much more quickly otherwise.

Vapor pressure is influenced by temperature. As the temperature increases, more molecules are released from the surface of the liquid.  This increases movement above the liquid surface, increasing the pressure in the vapor stage.  The image below illustrates the effect of temperature on vapor pressure. 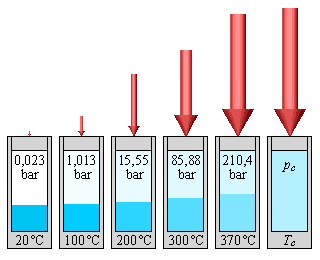