Can you guess how many people are in this stadium?

If you attend a college or professional football game, you need a ticket to get in. It is very likely that your ticket may specify a gate number, a section number, a row, and a seat number. No other ticket can have the same four parts to it. It may have the same gate, section, and seat number, but it would have to be in a different row. Each seat is unique and allows only one occupant to fill it. 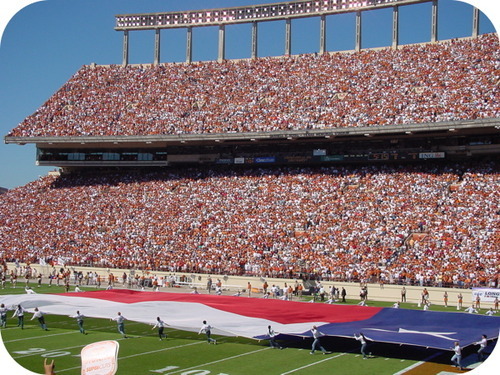 The principal quantum number , signified by (n), is the main energy level occupied by the electron. Energy levels are fixed distances from the nucleus of a given atom. They are described in whole number increments (e.g., 1, 2, 3, 4, 5, 6, . . .). At location n = 1, an electron would be closest to the nucleus, while n = 2 the electron would be farther, and n = 3 farther yet. As we will see, the principal quantum number corresponds to the row number for an atom on the periodic table.

The magnetic quantum number, signified as (m1), describes the orbital orientation in space. Electrons can be situated in one of three planes in three dimensional space around a given nucleus (x, y, and z). For a given value of the angular momentum quantum number l, there can be (2l + 1) values for m1. As an example:

The spin quantum number describes the spin for a given electron. An electron can have one of two associated spins, [latex]\displaystyle\left({+}\frac{1}{2}\right)[/latex] spin, or [latex]\displaystyle\left({-}\frac{1}{2}\right)[/latex] spin. An electron cannot have zero spin. We also represent spin with arrows ↑ or ↓. A single orbital can hold a maximum of two electrons and each must have opposite spin.