Why is the state of water different in each picture?

Why is the state of water different in each picture?

The state the water is in depends upon the temperature.  Each state (solid, liquid, and gas) has its own unique set of physical properties.

Matter and Its States

Matter typically exists in one of three states: solid , liquid , or gas . The state a given substance exhibits is also a physical property. Some substances exist as gases at room temperature (oxygen and carbon dioxide), while others, like water and mercury metal, exist as liquids. Most metals exist as solids at room temperature. All substances can exist in any of these three states.  In addition to existing in one of the three states, matter can also undergo a change of state.  A change of state occurs when matter is converted from one state to another state for example when a liquid is converted to a gas or a solid is converted to a liquid.

Note: Technically speaking a fourth state of matter called plasma exists, but it does not naturally occur on earth, so we will omit it from our study here.

Liquids have the following characteristics:

A familiar liquid is mercury metal. Mercury is an anomaly. It is the only metal we know of that is liquid at room temperature. Mercury also has an ability to stick to itself (surface tension) – a property all liquids exhibit. Mercury has a relatively high surface tension, which makes it very unique. Here you see mercury in its common liquid form. 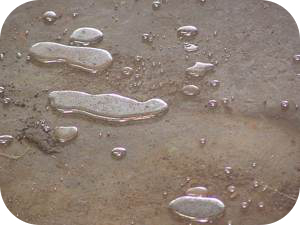 If we were to heat liquid mercury to its boiling point of 357°C, and under the right pressure conditions, we would notice all particles in the liquid state go into the gas state.

Gases have the following characteristics:

Solids are defined by the following characteristics:

If we were to cool liquid mercury to its freezing point of -39°C, and under the right pressure conditions, we would notice all of the liquid particles would go into the solid state.

The video below shows this process.

As you can see in the video, mercury can be solidified when its temperature is brought to its freezing point. However, when returned to room temperature conditions, mercury does not exist in solid state for long, and returns back to its more common liquid form.

Use the web site to answer the following questions: