The Structure of Ice

Have you ever been ice skating? 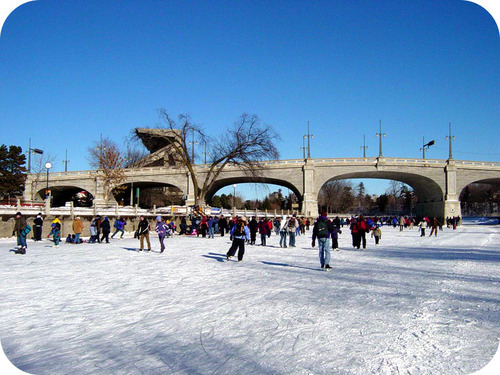 Ice is an interesting and useful material.  It can be used to cool food and keep it fresh.  It can provide recreation, such as ice-skating.  Ice can do great damage when it freezes – roads can buckle, houses can be damaged, water pipes can burst.   All this happens because of a unique property of water and ice.  When water freezes, it expands in volume as ice is formed.

Liquid water is a fluid.  The hydrogen bonds in liquid water constantly break and reform as the water molecules tumble past one another.  As water cools, its molecular motion slows and the molecules move gradually closer to one another.  The density of any liquid increases as its temperature decreases.  For most liquids, this continues as the liquid freezes and the solid state is denser than the liquid state.  However, water behaves differently.  It actually reaches its highest density at about 4°C.

Between 4°C and 0°C, the density gradually decreases as the hydrogen bonds begin to form a network characterized by a generally hexagonal structure with open spaces in the middle of the hexagons.

Ice is less dense than liquid water and so it floats.  Ponds or lakes begin to freeze at the surface, closer to the cold air.  A layer of ice forms, but does not sink as it would if water did not have this unique structure dictated by its shape, polarity, and hydrogen bonding.  If the ice were to sink as it froze, entire lakes would freeze solid.  Since the ice does not sink, liquid water remains under the ice all winter long.  This is important, as fish and other organisms are capable of surviving through winter.  Ice is one of only a very few solids that is less dense than its liquid form.