What causes this toy to move?

The motion of the duck illustrates a physical principle called vapor pressure. As the vapor pressure changes, the liquid in the duck moves up and down, causing the duck to move. 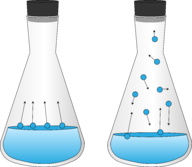 A dynamic equilibrium can be illustrated by an equation with a double arrow, meaning that the reaction is occurring in both directions and at the same rate.

Vapor pressure is dependent upon temperature. When the liquid in a closed container is heated, more molecules escape the liquid phase and evaporate. The greater number of vapor molecules strike the container walls more frequently, resulting in an increase in pressure. The Table below shows the temperature dependence of the vapor pressure of three liquids.