We should not be surprised that atoms, molecules, or ions must collide before they can react with each other. Atoms must be close together to form chemical bonds. This simple premise is the basis for a very powerful theory that explains many observations regarding chemical kinetics, including factors affecting reaction rates.

Collision theory is based on the following postulates:

We can see the importance of the two physical factors noted in postulates 2 and 3, the orientation and energy of collisions, when we consider the reaction of carbon monoxide with oxygen:

Carbon monoxide is a pollutant produced by the combustion of hydrocarbon fuels. To reduce this pollutant, automobiles have catalytic converters that use a catalyst to carry out this reaction. It is also a side reaction of the combustion of gunpowder that results in muzzle flash for many firearms. If carbon monoxide and oxygen are present in sufficient quantity, the reaction is spontaneous at high temperature and pressure.

The first step in the gas-phase reaction between carbon monoxide and oxygen is a collision between the two molecules: 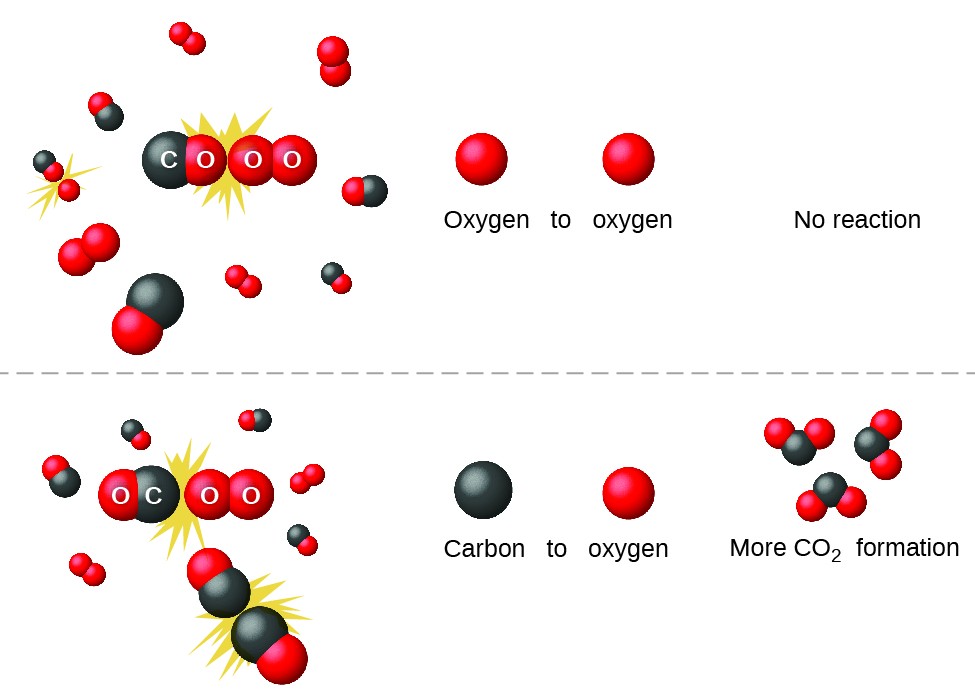 Figure 1. Illustrated are two collisions that might take place between carbon monoxide and oxygen molecules. The orientation of the colliding molecules partially determines whether a reaction between the two molecules will occur.

If the collision does take place with the correct orientation, there is still no guarantee that the reaction will proceed to form carbon dioxide. Every reaction requires a certain amount of activation energy for it to proceed in the forward direction, yielding an appropriate activated complex along the way.

Figure 2. Possible transition states (activated complexes) for carbon monoxide reacting with oxygen to form carbon dioxide. Solid lines represent covalent bonds, while dotted lines represent unstable orbital overlaps that may, or may not, become covalent bonds as product is formed. In the first two examples in this figure, the O=O double bond is not impacted; therefore, carbon dioxide cannot form. The third proposed transition state will result in the formation of carbon dioxide if the third “extra” oxygen atom separates from the rest of the molecule.

As Figure 2 demonstrates, even a collision with the correct orientation can fail to form the reaction product. In the study of reaction mechanisms, each of these three arrangements of atoms is called a proposed activated complex or transition state.

In most circumstances, it is impossible to isolate or identify a transition state or activated complex. In the reaction between carbon monoxide and oxygen to form carbon dioxide, activated complexes have only been observed spectroscopically in systems that utilize a heterogeneous catalyst. The gas-phase reaction occurs too rapidly to isolate any such chemical compound.

Activation Energy and the Arrhenius Equation 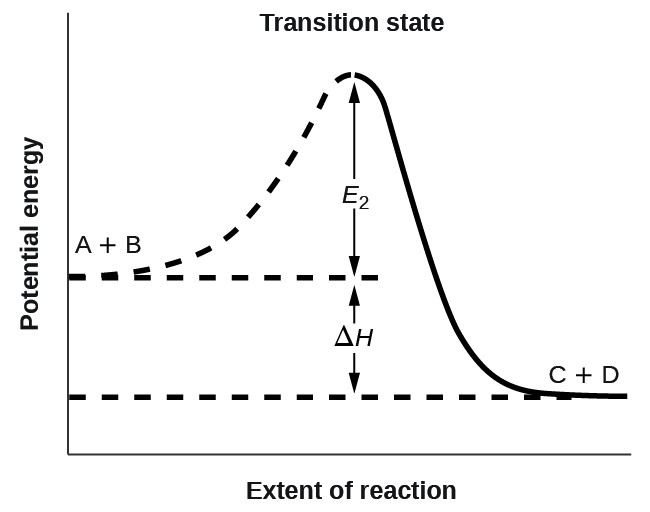 Figure 3 shows the energy relationships for the general reaction of a molecule of A with a molecule of B to form molecules of C and D: [latex]A+B\rightarrow C+D[/latex].

Figure 3 shows that the energy of the transition state is higher than that of the reactants A and B by an amount equal to Ea, the activation energy. Thus, the sum of the kinetic energies of A and B must be equal to or greater than Ea to reach the transition state. After the transition state has been reached, and as C and D begin to form, the system loses energy until its total energy is lower than that of the initial mixture. This lost energy is transferred to other molecules, giving them enough energy to reach the transition state. The forward reaction (that between molecules A and B) therefore tends to take place readily once the reaction has started. In Figure 3, ΔH represents the difference in enthalpy between the reactants (A and B) and the products (C and D). The sum of Ea and ΔH represents the activation energy for the reverse reaction: [latex]C+D\rightarrow A+B[/latex].

We can use the Arrhenius equation to relate the activation energy and the rate constant, k, of a given reaction:

In this equation, R is the ideal gas constant, which has a value 8.314 J/mol/K, T is temperature on the Kelvin scale, Ea is the activation energy in joules per mole, e is the constant 2.7183, and A is a constant called the frequency factor, which is related to the frequency of collisions and the orientation of the reacting molecules.

Both postulates of the collision theory of reaction rates are accommodated in the Arrhenius equation. The frequency factor A is related to the rate at which collisions having the correct orientation occur. The exponential term, [latex]{e}^{-E_{\text{a}}\text{/}RT},[/latex] is related to the fraction of collisions providing adequate energy to overcome the activation barrier of the reaction.

At one extreme, the system does not contain enough energy for collisions to overcome the activation barrier. In such cases, no reaction occurs. At the other extreme, the system has so much energy that every collision with the correct orientation can overcome the activation barrier, causing the reaction to proceed. In such cases, the reaction is nearly instantaneous.

The Arrhenius equation describes quantitatively much of what we have already discussed about reaction rates. For two reactions at the same temperature, the reaction with the higher activation energy has the lower rate constant and the slower rate. The larger value of Ea results in a smaller value for [latex]{e}^{{-}{E}_{\text{a}}\text{/}RT},[/latex] reflecting the smaller fraction of molecules with enough energy to react. Alternatively, the reaction with the smaller Ea has a larger fraction of molecules with enough energy to react. This will be reflected as a larger value of [latex]{e}^{{-}{E}_{\text{a}}\text{/}RT},[/latex] a larger rate constant, and a faster rate for the reaction. An increase in temperature has the same effect as a decrease in activation energy. A larger fraction of molecules has the necessary energy to react (Figure 4), as indicated by an increase in the value of [latex]{e}^{{-}{E}_{\text{a}}\text{/}RT}.[/latex] The rate constant is also directly proportional to the frequency factor, A. Hence a change in conditions or reactants that increases the number of collisions with a favorable orientation for reaction results in an increase in A and, consequently, an increase in k.

A convenient approach to determining Ea for a reaction involves the measurement of k at different temperatures and using of an alternate version of the Arrhenius equation that takes the form of linear equation:

The variation of the rate constant with temperature for the decomposition of HI(g) to H2(g) and I2(g) is given below. What is the activation energy for the reaction? 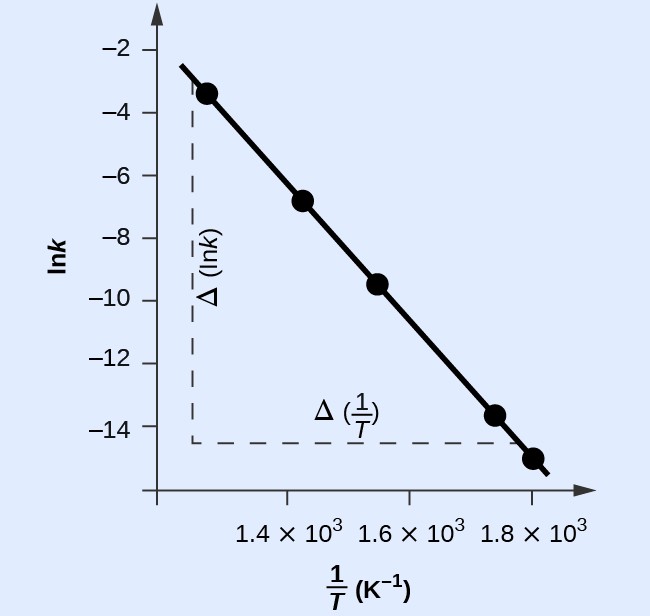 Figure 5. This graph shows the linear relationship between lnk and 1/T for the reaction 2HI → H2 + I2 according to the Arrhenius equation.

The slope of this line is given by the following expression:

In many situations, it is possible to obtain a reasonable estimate of the activation energy without going through the entire process of constructing the Arrhenius plot. The Arrhenius equation:

can be rearranged as shown to give:

This equation can be rearranged to give a one-step calculation to obtain an estimate for the activation energy:

Using the experimental data presented below, we can simply select two data entries. For this example, we select the first entry and the last entry:

After calculating [latex]\frac{1}{T}[/latex] and ln k, we can substitute into the equation:

This method is very effective, especially when a limited number of temperature-dependent rate constants are available for the reaction of interest.

Assuming the kinetics of this reaction are consistent with the Arrhenius equation, calculate the activation energy for this decomposition.

Chemical reactions require collisions between reactant species. These reactant collisions must be of proper orientation and sufficient energy in order to result in product formation. Collision theory provides a simple but effective explanation for the effect of many experimental parameters on reaction rates. The Arrhenius equation describes the relation between a reaction’s rate constant and its activation energy, temperature, and dependence on collision orientation.

1. The reactants either may be moving too slowly to have enough kinetic energy to exceed the activation energy for the reaction, or the orientation of the molecules when they collide may prevent the reaction from occurring.

5. After finding k at several different temperatures, a plot of lnk versus[latex]\frac{{-}{E}_{\text{a}}}{R}[/latex] gives a straight line with the slope [latex]\frac{1}{T},[/latex] from which Ea may be determined.

9. The rate constant k is related to the activation energy Ea by a relationship known as the Arrhenius equation. Its form is:

where A is the frequency factor. Using the data provided, and converting kilojoules to joules:

A plot of this data shows a straight line. Two points marked by an X are picked for convenience of reading and are used to determine the slope of the line: 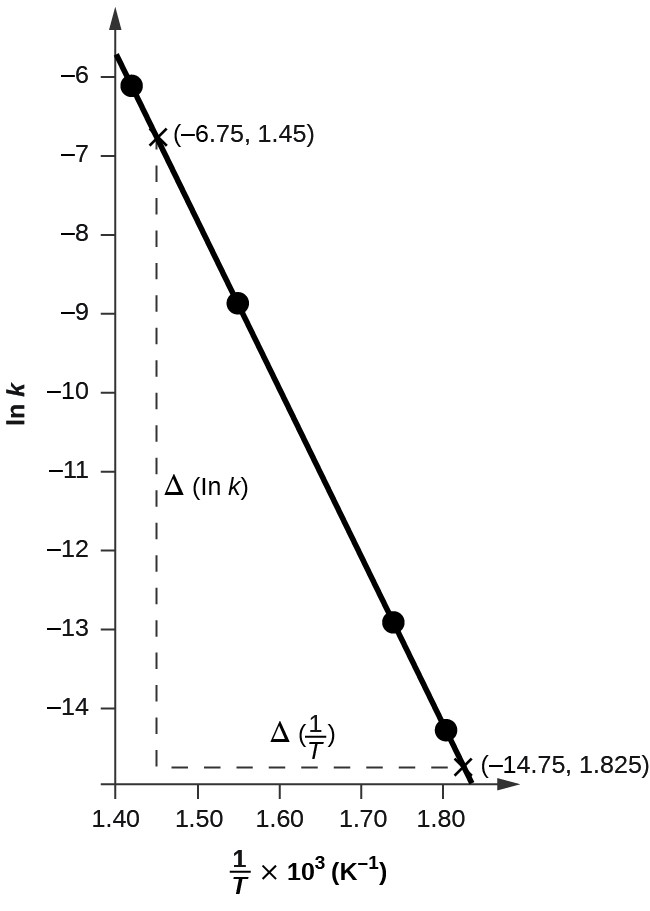 The slope of the line determined by these points is given by:

Whenever differences of very small numbers are taken, such as the reciprocals of T provided, an inherent problem occurs. To have accurate differences, a larger number of significant figures than justified by the data must be used. Thus five figures were used to obtain the value Ea = 108 kJ. This difficulty may be alleviated by the following approach.

Equating the values of A as solved from equations (1) and (2):

The value of k at 47°C may be determined from the Arrhenius equation now that the values of Ea and A have been calculated:

or 1.81 × 108 h or 7.6 × 106 day. (c) Assuming that the reaction is irreversible simplifies the calculation because we do not have to account for any reactant that, having been converted to product, returns to the original state.

17. The A atom has enough energy to react with BC; however, the different angles at which it bounces off of BC without reacting indicate that the orientation of the molecule is an important part of the reaction kinetics and determines whether a reaction will occur.

activation energy (Ea): energy necessary in order for a reaction to take place

Arrhenius equation: mathematical relationship between the rate constant and the activation energy of a reaction

collision theory: model that emphasizes the energy and orientation of molecular collisions to explain and predict reaction kinetics

frequency factor (A): proportionality constant in the Arrhenius equation, related to the relative number of collisions having an orientation capable of leading to product formation