It is often the case that a quantity of interest may not be easy (or even possible) to measure directly but instead must be calculated from other directly measured properties and appropriate mathematical relationships. For example, consider measuring the average speed of an athlete running sprints. This is typically accomplished by measuring the time required for the athlete to run from the starting line to the finish line, and the distance between these two lines, and then computing speed from the equation that relates these three properties:

Note that this simple arithmetic involves dividing the numbers of each measured quantity to yield the number of the computed quantity (100/10 = 10) and likewise dividing the units of each measured quantity to yield the unit of the computed quantity (m/s = m/s). Now, consider using this same relation to predict the time required for a person running at this speed to travel a distance of 25 m. The same relation between the three properties is used, but in this case, the two quantities provided are a speed (10 m/s) and a distance (25 m). To yield the sought property, time, the equation must be rearranged appropriately:

These calculations are examples of a versatile mathematical approach known as dimensional analysis (or the factor-label method). Dimensional analysis is based on this premise: the units of quantities must be subjected to the same mathematical operations as their associated numbers. This method can be applied to computations ranging from simple unit conversions to more complex, multi-step calculations involving several different quantities.

Several other commonly used conversion factors are given in Table 1.

Since this simple arithmetic involves quantities, the premise of dimensional analysis requires that we multiply both numbers and units. The numbers of these two quantities are multiplied to yield the number of the product quantity, 86, whereas the units are multiplied to yield [latex]\frac{\text{in.}\times \text{cm}}{\text{in.}}[/latex] . Just as for numbers, a ratio of identical units is also numerically equal to one, [latex]\frac{\text{in.}}{\text{in.}}=\text{1,}[/latex] and the unit product thus simplifies to cm. (When identical units divide to yield a factor of 1, they are said to “cancel.”) Dimensional analysis may be used to confirm the proper application of unit conversion factors as demonstrated in the following example.

The mass of a competition frisbee is 125 g. Convert its mass to ounces using the unit conversion factor derived from the relationship 1 oz = 28.349 g (Table 1).

If we have the conversion factor, we can determine the mass in kilograms using an equation similar the one used for converting length from inches to centimeters.

We write the unit conversion factor in its two forms:

The correct unit conversion factor is the ratio that cancels the units of grams and leaves ounces.

Beyond simple unit conversions, the factor-label method can be used to solve more complex problems involving computations. Regardless of the details, the basic approach is the same—all the factors involved in the calculation must be appropriately oriented to insure that their labels (units) will appropriately cancel and/or combine to yield the desired unit in the result. This is why it is referred to as the factor-label method. As your study of chemistry continues, you will encounter many opportunities to apply this approach.

What is the density of common antifreeze in units of g/mL? A 4.00-qt sample of the antifreeze weighs 9.26 lb.

We need to use two steps to convert volume from quarts to milliliters.

Alternatively, the calculation could be set up in a way that uses three unit conversion factors sequentially as follows:

While being driven from Philadelphia to Atlanta, a distance of about 1250 km, a 2014 Lamborghini Aventador Roadster uses 213 L gasoline.

Alternatively, the calculation could be set up in a way that uses all the conversion factors sequentially, as follows:

How did a magazine photograph help a physicist crack one of the secrets of the atom bomb?

You can view the transcript for “Atom Bombs and Dimensional Analysis – Sixty Symbols” here (opens in new window).

Defining the Celsius and Fahrenheit temperature scales as described in the previous paragraph results in a slightly more complex relationship between temperature values on these two scales than for different units of measure for other properties. Most measurement units for a given property are directly proportional to one another (y = mx). Using familiar length units as one example:

where [latex]y[/latex] = length in feet, [latex]x[/latex] = length in inches, and the proportionality constant, [latex]m[/latex], is the conversion factor. The Celsius and Fahrenheit temperature scales, however, do not share a common zero point, and so the relationship between these two scales is a linear one rather than a proportional one ([latex]y = mx + b[/latex]). Consequently, converting a temperature from one of these scales into the other requires more than simple multiplication by a conversion factor, [latex]m[/latex], it also must take into account differences in the scales’ zero points ([latex]b[/latex]).

The equation relating the temperature scales is then:

An abbreviated form of this equation that omits the measurement units is:

We can graph that equation to visualize the relationship between Fahrenheit and Celsius: 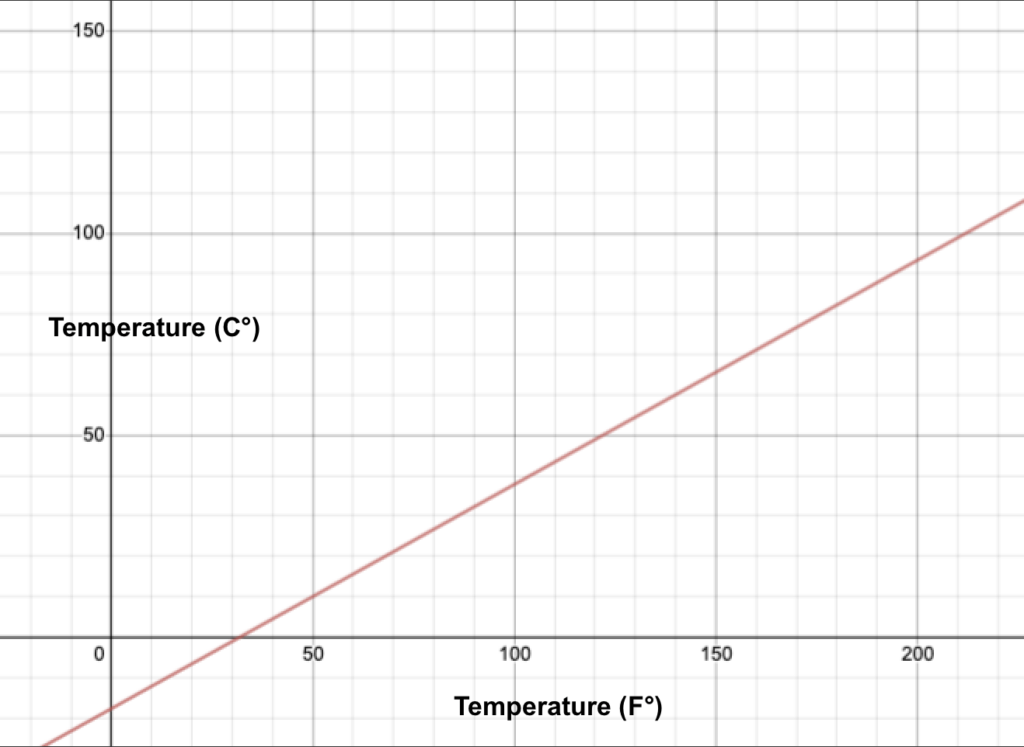 Rearrangement of this equation yields the form most useful for converting from Fahrenheit to Celsius:

As mentioned earlier, the SI unit of temperature is the kelvin (K). Unlike the Celsius and Fahrenheit scales, the kelvin scale is an absolute temperature scale in which 0 (zero) K corresponds to the lowest temperature that can theoretically be achieved. The early 19th-century discovery of the relationship between a gas’s volume and temperature suggested that the volume of a gas would be zero at −273.15 °C. In 1848, British physicist William Thompson, who later adopted the title of Lord Kelvin, proposed an absolute temperature scale based on this concept (further treatment of this topic is provided in the module on gases).

The 273.15 in these equations has been determined experimentally, so it is not exact. Figure 1 shows the relationship among the three temperature scales. Recall that we do not use the degree sign with temperatures on the kelvin scale.

Although the kelvin (absolute) temperature scale is the official SI temperature scale, Celsius is commonly used in many scientific contexts and is the scale of choice for nonscience contexts in almost all areas of the world. Very few countries (the U.S. and its territories, the Bahamas, Belize, Cayman Islands, and Palau) still use Fahrenheit for weather, medicine, and cooking.

Normal body temperature has been commonly accepted as 37.0 °C (although it varies depending on time of day and method of measurement, as well as among individuals). What is this temperature on the kelvin scale and on the Fahrenheit scale?

Baking a ready-made pizza calls for an oven temperature of 450 °F. If you are in Europe, and your oven thermometer uses the Celsius scale, what is the setting? What is the kelvin temperature?

Measurements are made using a variety of units. It is often useful or necessary to convert a measured quantity from one unit into another. These conversions are accomplished using unit conversion factors, which are derived by simple applications of a mathematical approach called the factor-label method or dimensional analysis. This strategy is also employed to calculate sought quantities using measured quantities and appropriate mathematical relations.

Fahrenheit: unit of temperature; water freezes at 32 °F and boils at 212 °F on this scale

unit conversion factor: ratio of equivalent quantities expressed with different units; used to convert from one unit to a different unit