The measurement units for seven fundamental properties (“base units”) are listed in (Table 1). The standards for these units are fixed by international agreement, and they are called the International System of Units or SI Units (from the French, Le Système International d’Unités). SI units have been used by the United States National Institute of Standards and Technology (NIST) since 1964. Units for other properties may be derived from these seven base units.

Everyday measurement units are often defined as fractions or multiples of other units. Milk is commonly packaged in containers of 1 gallon (4 quarts), 1 quart (0.25 gallon), and one pint (0.5 quart). This same approach is used with SI units, but these fractions or multiples are always powers of 10. Fractional or multiple SI units are named using a prefix and the name of the base unit. For example, a length of 1000 meters is also called a kilometer because the prefix kilo means “one thousand,” which in scientific notation is 103 (1 kilometer = 1000 m = 103 m). The prefixes used and the powers to which 10 are raised are listed in Table 2.

You can view the transcript for “05 Metric System Prefixes HD” here (opens in new window).

The initial units of the metric system, which eventually evolved into the SI system, were established in France during the French Revolution. The original standards for the meter and the kilogram were adopted there in 1799 and eventually by other countries. This section introduces four of the SI base units commonly used in chemistry. Other SI units will be introduced later. 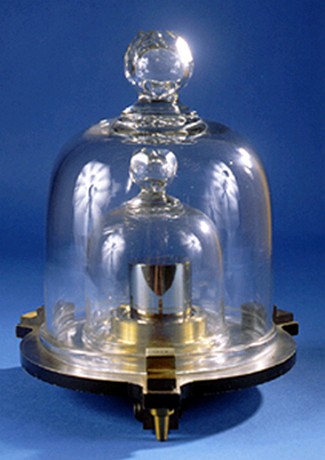 The standard unit of mass in the SI system is the kilogram (kg). The kilogram was previously defined by the International Union of Pure and Applied Chemistry (IUPAC) as the mass of a specific reference object. This object was originally one liter of pure water, and more recently it was a metal cylinder made from a platinum-iridium alloy with a height and diameter of 39 mm (Figure 2). In May 2019, this definition was changed to one that is based instead on precisely measured values of several fundamental physical constants. One kilogram is about 2.2 pounds. The gram (g) is exactly equal to 1/1000 of the mass of the kilogram (10−3 kg).

Temperature is an intensive property. The SI unit of temperature is the kelvin (K). The IUPAC convention is to use kelvin (all lowercase) for the word, K (uppercase) for the unit symbol, and neither the word “degree” nor the degree symbol (°). The degree Celsius (°C) is also allowed in the SI system, with both the word “degree” and the degree symbol used for Celsius measurements. Celsius degrees are the same magnitude as those of kelvin, but the two scales place their zeros in different places. Water freezes at 273.15 K (0 °C) and boils at 373.15 K (100 °C) by definition, and normal human body temperature is approximately 310 K (37 °C). The conversion between these two units and the Fahrenheit scale will be discussed later.

Show Solution
To learn more about the relationship between mass, volume, and density, use this PBS density simulator to explore the density of different materials, like wood, ice, brick, and aluminum.

The PBS density lab illustrates another way to determine density, using displacement of water and other liquid.

Practice finding the density using the tools given to you on the simulator.

First, you can determine if an object is more or less dense than the liquid.

Second, using the scale, you can determine mass of the object.

Can you calculate the density of the green “????” object?

Predict what will happen if you increase the volume of the square. Then try it out! Were you correct? Why did you make that prediction?

You can view the transcript for “Density: A Story of Archimedes and the Gold Crown” here (opens in new window).