Adolescence is a transitional stage of biological, cognitive and social development that prepares individuals for taking on adult roles.

Adolescence is a transitional stage of physical and psychological human development. The period of adolescence is most closely associated with the teenage years, although its physical, psychological and cultural expressions can begin earlier and end later. In studying adolescent development, adolescence can be defined biologically as the physical transition marked by the onset of puberty and the termination of physical growth; cognitively, as changes in the ability to think abstractly and multi-dimensionally; and socially as a period of preparation for adult roles. Major pubertal and biological changes include changes to the sex organs, height, weight and muscle mass, as well as major changes in brain structure and organization. Cognitive advances encompass both increases in knowledge and the ability to think abstractly and to reason more effectively. This is also a time when adolescents start to explore gender identity and sexuality in depth.

Among the most common beliefs about adolescence is that it is the time when teens form their personal identities. Empirical studies confirm a normative process of change in both the content and structure of one’s thoughts about the self. Researchers have used three general approaches to understanding identity development: self-concept, sense of identity and self-esteem.

Early in adolescence, cognitive developments result in greater self-awareness, greater awareness of others and their thoughts and judgments, the ability to think about abstract, future possibilities, and the ability to consider multiple possibilities at once. While children define themselves with physical traits, adolescents define themselves based on their values, thoughts and opinions. Adolescents can now conceptualize multiple “possible selves” they could become and long-term possibilities and consequences of their choices. Exploring these possibilities may result in abrupt changes in self-presentation as the adolescent chooses or rejects qualities and behaviors, trying to guide the actual self toward the ideal self (who the adolescent wishes to be) and away from the feared self (who the adolescent does not want to be). In terms of gender socialization, boys and girls start to gravitate toward traditional roles. For example, girls may take more liberal art type classes while boys are more physical. Boys and girls tend to socialize together, although dating starts to occur. Girls generally look to their mothers or female role models for guidance, while boys tend to identify more with their fathers or male role models.

Unlike the conflicting aspects of self-concept, identity represents a coherent sense of self-stable across circumstances and including past experiences and future goals. Development psychologist Erik Erikson describes adolescence as the period during which individuals ponder the questions: who am I and what can I be? As they make the transition from childhood to adulthood, adolescents ponder the roles they will play in the adult world. Initially, they are apt to experience some role confusion—mixed ideas and feelings about the specific ways in which they will fit into society—and may experiment with a variety of behaviors and activities. For example, a girl may want to pursue a career that is predominantly male, and if she is stifled by her sense of female identity, she may end up with a lifetime of regret. The same is true of males wishing to pursue a female-dominated career. Erikson proposed that most adolescents eventually achieve a sense of identity regarding who they are and where their lives are headed.

The final major aspect of identity formation is self-esteem, which is one’s thoughts and feelings about one’s self-concept and identity. Contrary to popular belief, there is no empirical evidence for a significant drop in self-esteem over the course of adolescence. “Barometric self-esteem” fluctuates rapidly and can cause severe distress and anxiety, but baseline self-esteem remains highly stable across adolescence.The validity of global self-esteem scales has been questioned, and many suggest that more specific scales might reveal more about the adolescent experience. For girls, they are most likely to enjoy high self-esteem when engaged in supportive relationships with friends, as the most important function of friendship to them is having someone who can provide social and moral support. In contrast, boys are more concerned with establishing and asserting their independence and defining their relation to authority. As such, they are more likely to derive high self-esteem from their ability to successfully influence their friends.

Peer groups are especially important during adolescence, a period of development characterized by a dramatic increase in time spent with peers and a decrease in adult supervision. Adolescents also associate with friends of the opposite sex much more than in childhood and tend to identify with larger groups of peers based on shared characteristics. Peer groups offer members the opportunity to develop various social skills like empathy, sharing and leadership. 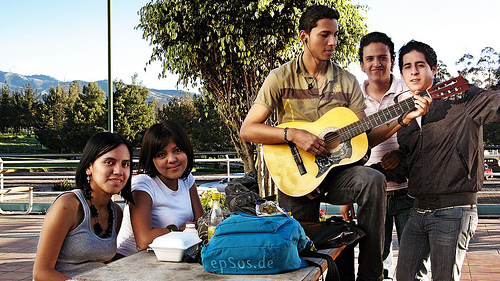