Gender Roles in the U.S.

Gender roles refer to the set of social and behavioral norms that are considered to be appropriate for people of a specific sex.

Gender roles refer to the set of social and behavioral norms that are considered to be socially appropriate for individuals of a specific sex. There has been significant variation in gender roles over cultural and historical spans, and all gender roles are culturally and historically contingent. Much scholarly work on gender roles addresses the debate over the environmental or biological causes for the development of gender roles. The following section seeks to orient the reader to the sociological theorization of the gender role and discuss its application in an American context.

Gender role theory posits that boys and girls learn to perform one’s biologically assigned gender through particular behaviors and attitudes. Gender role theory emphasizes the environmental causes of gender roles and the impact of socialization, or the process of transferring norms, values, beliefs, and behaviors to group members, in learning how to behave as a male or a female. Social role theory proposes that the social structure is the underlying force in distinguishing genders and that sex-differentiated behavior is driven by the division of labor between two sexes within a society. The division of labor creates gender roles, which in turn, lead to gendered social behavior.

Gender Roles in the United States

One main thread in discussions about gender roles in the United States has been the historical evolution from a single-income family or a family unit in which one spouse (typically the father) is responsible for the family income, to a dual-income family, or a family unit in which both spouses generate income. Before the rise of feminism in the 1960s and 1970s and the influx of women into the workforce in the 1980s, women were largely responsible for dealing with home matters, while men worked and earned income outside the home. While some claim that this was a sexist structure, others maintain that the structure simply represented a division of labor or a social system in which a particular segment of the population performs one type of labor and another segment performs another type.

In 1955, sociologist Talcott Parsons developed a model of nuclear families in the United States that addressed gender roles. Family structures vary across cultures and history, and the term nuclear family refers to a family unit of two parents and their children. Parsons developed two models of gender roles within the nuclear family. His first model involved total role segregation; men and women would be trained and educated in gender-specific institutions, and high professional qualifications and the workplace would be intended for men. Women would be primarily focused on housekeeping, childcare, and children’s education. Male participation in domestic activity would be only partially desired and socially acceptable. Further, in the case of conflict, the man would have the final say. Parsons contrasted this first model with a second that involved the total integration of roles. In the second model, men and women would be educated in the same institutions and study the same content in classes. Outside the educational milieu, women and men would both perceive career to be important, and equal professional opportunities for men and women would be considered socially necessary. Both parties in a marriage would bear responsibility for housework and child rearing. Finally, neither gender would systematically dominate decision making.

The national trend toward a total integration of gender roles is reflected in women’s education, professional achievement, and family income contributions. Currently, more women than men are enrolled in college, and women are expected to earn more graduate degrees than men over the next several years. In 2005, 22% of American households had two income earners, which suggests the presence of women in the workforce. However, in most contexts, women are still expected to be the primary homemakers, even if they are contributing to household income by working outside the home. 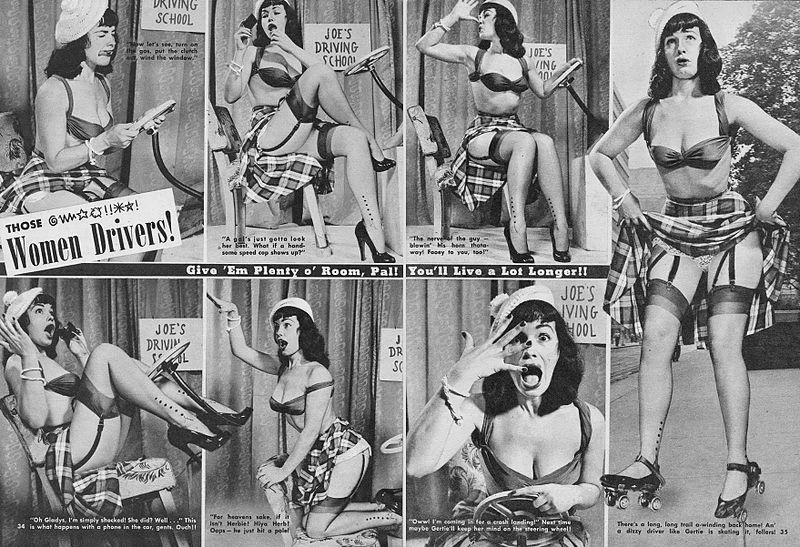 Women Behind the Wheel, 1952
This image, from the magazine Beauty Parade, offers a stereotyped view of female drivers.