Gender roles vary significantly across cultures. Indeed, all gender roles are culturally and historically contingent, meaning that they cannot be analyzed outside of their cultural and historical contexts. This section attempts to provide a few examples of variation in gender roles and the lives of women in various places around the world. These small glimpses are not universal by any means, but this overview should provide a brief summary of just how much women’s lives vary and how much women’s lives seem similar across national boundaries.

Governments in Europe are typically more active in governing the lives of their citizens than the U.S. government. As such, European governments have used their social powers to encourage equality between men and women. In Sweden, for example, all working parents are entitled to sixteen months paid leave per child, with the cost shared by the government and the employer. To encourage greater paternal involvement in childrearing, a minimum of two months out of the sixteen is required to be used by the “minority” parent, usually the father. Through policies such as parental leave, European states actively work to promote equality between genders in childrearing and professional lives.

As is the case for many women in the United States and in Europe, many women in Chile feel pressure to conform to traditional gender roles. A 2010 study by the United Nations Development Programme found that 62% of Chileans are opposed to full gender equality and expressed the belief that women should limit themselves to the roles of mother and wife. These social barriers to gender equality exist in the face of legal equality.

Chilean law has recently undergone some drastic changes to support gender equality. Until recently, women lost their right to administer their own assets once they were married, with their husbands receiving all of their wealth. Now, a woman is allowed to maintain her own property. Previously, women were legally required to live with and be faithful and obedient to her husband, but now it is not law.

Chile grants both men and women the right to vote and had one of the first female presidents in the world. From 2006 until 2010, Michelle Bachelet served as Chile’s first female president. Women are gaining increasingly prominent positions in various aspects of government. The prominence of female politicians is working to undo traditional stereotypes of women belonging only in the domestic sphere.

Women in Japan are usually well-educated and employed, though gender dynamics emerge in regards to social pressure to find a husband. Historically, gender has been an important principle of Japanese social stratification but the cultural elaboration of gender differences has, of course, varied over time and within social class. After World War II, the legal position of women was redefined by the occupation authorities. Individual rights were given precedence over obligation to family. Women were guaranteed the right to choose spouses and occupations, to inherit and own property in their own names, and to retain custody of their children. Women were granted the right to vote in 1946. Legally, few barriers to women’s equal participation in social and professional life remain in Japan.

However, gender inequality continues in family life, the workplace, and popular values. A common Japanese proverb that continues to influence gender roles is “good wife, wise mother. ” The proverb reflects the still common social belief, encouraged by men and women alike, that it is in the woman’s, her children’s, and society’s best interests for her to stay home and devote herself to her children. In most households, women are responsible for family budgets and make independent decisions about the education, careers, and lifestyles of their families.

Better educational prospects are improving women’s professional prospects. Immediately after World War II, the common image of womanhood was that of a secretary who becomes a housewife and mother after marriage. But a new generation of educated woman is emerging who wishes to establish a career in the workforce. Japanese women are joining the labor force in unprecedented numbers such that around 50% of the workforce is comprised of women. One important change is that married women have begun to participate in the workforce. In the 1950s, most female employees were young and single; 62% of the female labor force had never been married. By 1987, 68% of the female workforce was married, and only 23% had never been married.

Despite changes in the workforce, women are still expected to get married. It is common for unmarried women to experience anxiety and social pressure as a result of her unwed status.

These examples from Sweden, Chile, and Japan hardly scratch the surface of demonstrating some of the extreme variation in gender roles worldwide. 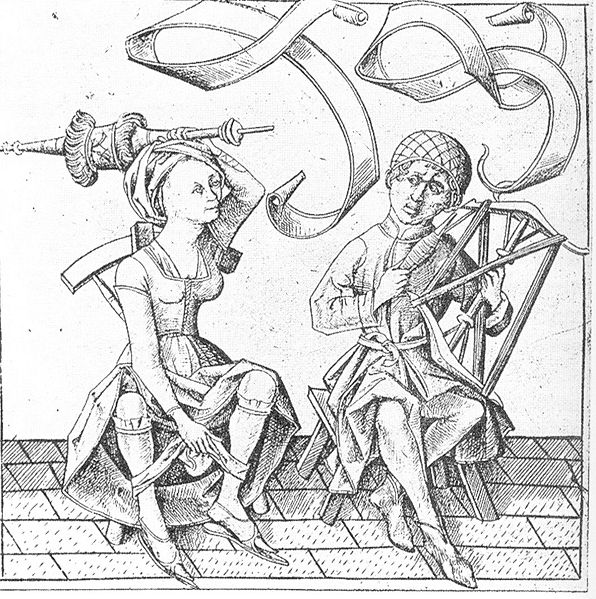 “The World Turned Upside Down”
Gender roles are reversed in this picture where the woman holds the scepter, while the man is spinning.