Photo of the Book of Isaiah page of the Bible

Religious systems have stories, or sacred narratives. Some stories may be more sacred than others, e.g., in Christianity the story of Christ’s resurrection is more sacred then the story of Him turning water into wine at a wedding celebration. Stories may be about many things, but there are some common themes: origins of earth and humans, what happens when we die, deeds of important people, and disasters. Anthropologists can study these stories, or myths, to learn more about the people. Myth in anthropology should not be interpreted as a falsehood. In anthropology, a myth is a truism for the people following that belief system. 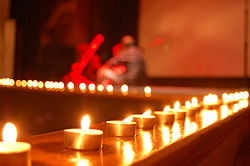 Ritual promotes what Victor Turner called communitas, a sense of unity that transcends social distinctions like socioeconomic class. During the period of the ritual, rank and status are forgotten as members think of themselves as a community. This helps cement unity among community members.

Ritual can also be a portrayal influence or a reenactment of myth, e.g., communion or baptism. Portrayal influence invokes magic to manipulate the supernatural. This has nothing to do with David Copperfield type of magic—it is about harnessing supernatural forces. If the magic does not seem to work, there is not a problem with the magic, but with the ritual—the practitioner did something wrong in their performance.

Magic uses a couple of principles: imitation (or similarity) and contagion. The principle of imitation (similarity) states that if one acts out what one wants to happen then the likelihood of that occurring increases. Baptism is a good example of this as is the Pueblo Indians ritual of whipping yucca juice into frothy suds, which symbolize rain clouds. 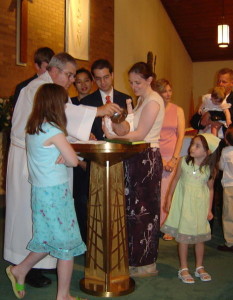 The principle of contagion states that things that been in contact with the supernatural remain connected to the supernatural. That connection can be used to transfer mana from the one thing to the other. Voodoo dolls are the classic example of the law of contagion, however, some cultures belief that names also have mana, so for anyone outside of the family to know their real name gives them the power to perform black magic against them. 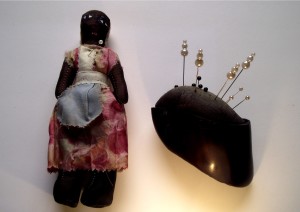 Another form of magic is divination. Divination is the use of ritual to obtain answers to questions from supernatural sources, e.g., oracle bones, tea leaves, way a person falls, date of birth, etc. There are two main categories of divination: those results that can be influenced by diviner and those that cannot. Tarot cards, tea leaves, randomly selecting a Bible verse and interpreting an astrological sign are examples of the former. Casting lots, flipping a coin or checking to see whether something floats on water are examples of the latter.

Ritual is infused with symbolic expression. Emile Durkheim suggested that religious systems were a set of practices related to sacred things. The sacred is that which inspires awe, respect and reverence because it is set apart from the secular world or is forbidden. People create symbols to represent aspects of society that inspire these feelings. For instance, the totems of Australian aborigine groups is spiritually related to members of the society. The human soul is a kindred spirit to the sacred plant or animal. Clifford Geertz discussed how symbols expressed feelings of society to maintain stability. This approach helped to broaden early definitions of religion beyond supernatural to incorporate actions of people and helped to account for the deep commitment and behavior of adherents.