“Colonization of New England” – Early settlers cut and saw trees and use the lumber to construct a building, possibly a warehouse for their supplies. This is the first scene painted entirely by Costaggini.

Ethnocentrism is the term anthropologists use to describe the opinion that one’s own way of life is natural or correct. Some would simply call it cultural ignorance. Ethnocentrism means that one may see his/her own culture as the correct way of living. For those who have not experienced other cultures in depth can be said to be ethnocentric if they feel that their lives are the most natural way of living. Some cultures may be similar or overlap in ideas or concepts, however, some people are in a sense, shocked to experience differences they may encounter with individuals culturally different than themselves. In extreme cases, a group of individuals may see another cultures way of life and consider it wrong, because of this, the group may try to convert the other group to their own ways of living. Fearful war and genocide could be the devastating result if a group is unwilling to change their ways of living.

An example of ethnocentrism in culture is the Asian cultures across all the countries of Asia. Throughout Asia, the way of eating is to use chopsticks with every meal. These people may find it unnecessary to find that people in other societies, such as the American society, eat using forks, spoons, knives, etc. Since these countries use chopsticks to eat every meal, they find it foolish for other cultures to not use utensils similar to chopsticks; however, they do accept the fact that they use different utensils for eating. This example is not something extreme that could lead to genocide or war, but it is a large enough gap between these cultures for people to see their way of eating as the natural or best way to typically eat their food.

Another example of ethnocentrism is colonialism. Colonialism can be defined as cultural domination with enforced social change. Colonialism refers to the social system in which the political conquests by one society of another leads to “cultural domination with enforced social change”. A good example to look at when examining colonialism is the British overtake of India. The British had little understanding of the culture in India which created a lot of problems an unrest during their rule.[10] 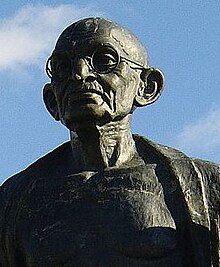 “Statue of Gandhi” – Gandhi was an important figure in the struggle to end the period of British colonial rule in India, he fought for peace and understanding during this time of unrest.

Ethnocentrism may not, in some circumstances, be avoidable. We all often have instinctual reactions toward another person or culture’s practices or beliefs. But these reactions do not have to result in horrible events such as genocide or war. In order to avoid such awful things like those we must all try to be more culturally relative. Ethnocentrism is one solution to tension between one cultural self and another cultural self. It helps reduce the other way of life to a version of one’s own.