A glass ceiling is a term used to describe the unseen, yet unbreakable, barrier that keeps one from rising to the upper rungs of the corporate ladder, regardless of qualifications or achievements.”[1]

Initially, and sometimes still today, the metaphor was applied by feminists in reference to barriers in the careers of high achieving women.[2] In the US the concept is sometimes extended to refer to obstacles hindering the advancement of minority men, as well as women.[2]

David Cotter and colleagues defined four distinctive characteristics that must be met to conclude that a glass ceiling exists. A glass ceiling inequality represents:

Cotter and his colleagues found that glass ceilings are correlated strongly with gender. Both white and African-American women face a glass ceiling in the course of their careers. [3]

The glass ceiling metaphor has often been used to describe invisible barriers (“glass”) through which women can see elite positions but cannot reach them (“ceiling”).[4] These barriers prevent large numbers of women and ethnic minorities from obtaining and securing the most powerful, prestigious, and highest-grossing jobs in the workforce.[5] Moreover, this effect may make women feel they are not worthy to fill high-ranking positions or as if their bosses do not take them seriously or see them as potential candidates for advancement.[6][7] 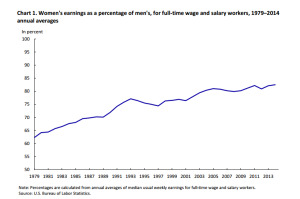 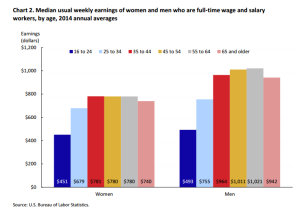 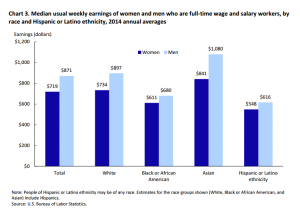 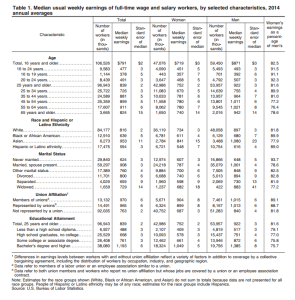 The table above reflects U.S. gender, age, ethnicity, marriage status, union affiliation, and educational attainment in comparison to earnings in 2014. [8]