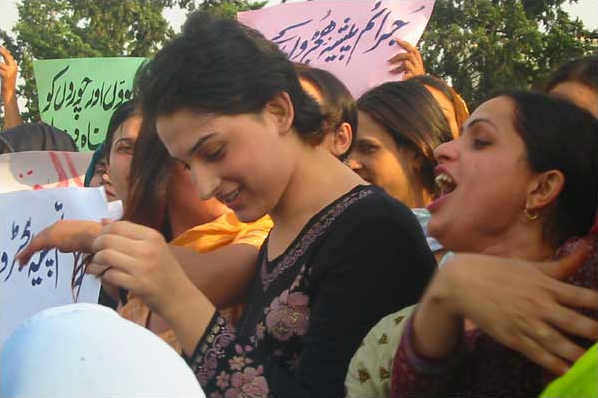 A Pakistani hijra at a protest between two hijra groups from Islamabad and Rawalpindi.

Hijra (for translations, see [n 1]) is a term used in South Asia – in particular, in India – to refer to transwomen (male-to-female transsexual or transgender individuals).[1][2] In other areas of India, transgender people are also known as Aravani, Aruvani or Jagappa.[3]

In Pakistan and Bangladesh, the hijras are officially recognized as third gender by the government,[4][5] being neither completely male nor female. The term more commonly advocated by social workers and transgender community members themselves iskhwaaja sira (Urdu: خواجه سرا‎) and can identify the individual as a transsexual person, transgender person (khusras), cross-dresser (zenanas) or eunuch (narnbans).[6][7]

Hijras have a recorded history in the Indian subcontinent from antiquity onwards as suggested by the Kama Sutra period. This history features a number of well-known roles within subcontinental cultures, part gender-liminal, part spiritual and part survival.

In South Asia, many hijras live in well-defined and organised all-hijra communities, led by a guru.[8][9] These communities have sustained themselves over generations by “adopting” young boys who are rejected by, or flee, their family of origin.[10] Many work as sex workers for survival.[11]

The word “hijra” is an Urdu-Hindustani word derived from the Semitic Arabic root hjr in its sense of “leaving one’s tribe,”[12] and has been borrowed into Hindi. The Indian usage has traditionally been translated into English as “eunuch” or “hermaphrodite,” where “the irregularity of the male genitalia is central to the definition.”[13] However, in general hijras are born with typically male physiology, only a few having been born with intersex variations.[14] Some Hijras undergo an initiation rite into the hijra community called nirwaan, which refers to the removal of the penis, scrotum and testicles.[11]

Since the late 20th century, some hijra activists and Western non-government organizations (NGOs) have lobbied for official recognition of the hijra as a kind of “third sex” or “third gender,” as neither man nor woman.[15] Hijras have successfully gained this recognition in Bangladesh and are eligible for priority in education.[16] In India, the Supreme Court in April 2014 recognized hijra and transgender people as a ‘third gender’ in law.[17][18][19]

Nepal, Pakistan, India, and Bangladesh have all legally recognized the existence of a third gender, including on passports and other official documents.[20]

A number of terms across the culturally and linguistically diverse Indian subcontinent represent similar sex or gender categories. While these are rough synonyms, they may be better understood as separate identities due to regional cultural differences. In Odia, a hijra is referred to as hinjida, hinjda or napunsaka, in Telugu, as napunsakudu(నపుంసకుడు), kojja (కొజ్జ) or maada (మాడ), in Tamil Nadu, Thiru nangai (mister woman), Ali, aravanni, aravani, or aruvani, in Punjabi, khusra and jankha, in Sindhi khadra, inGujarati, pavaiyaa (પાવૈયા).

In North India, the goddess Bahuchara Mata is worshipped by Pavaiyaa (પાવૈયા). In South India, the goddess Renuka is believed to have the power to change one’s sex. Male devotees in female clothing are known as Jogappa. They perform similar roles to hijra, such as dancing and singing at birth ceremonies and weddings.[21]

The word kothi (or koti) is common across India, similar to the Kathoey of Thailand, although kothis are often distinguished from hijras. Kothis are regarded as feminine men or boys who take a feminine role in sex with men, but do not live in the kind of intentional communities that hijras usually live in. Additionally, not all kothis have undergone initiation rites or the body modification steps to become a hijra.[22] Local equivalents include durani (Kolkata), menaka (Cochin),[23] meti (Nepal), and zenana (Pakistan).

Hijra used to be translated in English as “eunuch” or “hermaphrodite,”[13] although LGBT historians or human rights activists have sought to include them as being transgender.[24] In a series of meetings convened between October 2013 and Jan 2014 by the transgender experts committee of India’s Ministry of Social Justice and Empowerment, hijra and other trans activists asked that the term “eunuch” be discontinued from usage in government documents, as it is not a term with which the communities identify.

A group of Hijra in Bangladesh.

These identities have no exact match in the modern Western taxonomy of gender and sexual orientation,[24] and challenge Western ideas of sex and gender.[11]

In India, some Hijras do not define themselves by specific sexual orientation, but rather by renouncing sexuality altogether. Sexual energy is transformed into sacred powers. However, these notions can come in conflict with the practical, which is that hijras are often employed as prostitutes.[25] Furthermore, in India a feminine male who takes a “receptive” role in sex with a man will often identify as a kothi (or the local equivalent term). While kothis are usually distinguished from hijras as a separate gender identity, they often dress as women and act in a feminine manner in public spaces, even using feminine language to refer to themselves and each other. The usual partners of hijras and kothis are men who consider themselves heterosexual as they are the ones who penetrate.[26] These male partners are often married, and any relationships or sex with “kothis” or hijras are usually kept secret from the community at large. Some hijras may form relationships with men and even marry,[27] although their marriage is not usually recognized by law or religion. Hijras and kothis often have a name for these masculine sexual or romantic partners; for example, panthi in Bangladesh, giriya in Delhi or sridhar in Cochin.[23]

Most hijras live at the margins of society with very low status; the very word “hijra” is sometimes used in a derogatory manner. The Indian lawyer and author Rajesh Talwar has written a book highlighting the human rights abuses suffered by the community titled ‘The Third Sex and Human Rights.’[28] Few employment opportunities are available to hijras. Many get their income from extortion (forced payment by disrupting work/life using demonstrations and interference), performing at ceremonies (toli), begging (dheengna), or sex work (‘raarha’)—an occupation of eunuchs also recorded in premodern times. Violence against hijras, especially hijra sex workers, is often brutal, and occurs in public spaces, police stations, prisons, and their homes.[29] As with transgender people in most of the world, they face extreme discrimination in health, housing, education, employment, immigration, law, and any bureaucracy that is unable to place them into male or female gender categories.[30]

In 2008, HIV prevalence was 27.6% amongst hijra sex workers in Larkana.[6] The general prevalence of HIV among the adult Pakistani population is estimated at 0.1%.[31]

In October 2013, Pakistani Christians and Muslims (Shia and Sunni) were putting pressure on the landlords of Imamia Colony to evict any transgender residents. “Generally in Pakistan, Khwaja Saraa are not under threat. But they are in Khyber Pakhtunkhwa Province because of a ‘new Islam’ under way”, I.A. Rehman, the director of the Human Rights Commission of Pakistan.[32]

In a study of Bangladeshi hijras, participants reported not being allowed to seek healthcare at the private chambers of doctors, and experiencing abuse if they go to government hospitals.[33]

Since India’s Supreme Court re-criminalized homosexuality and bisexuality on 13 December 2013, there has been a sharp increase in the physical, psychological and sexual violence against the transgender community by the Indian Police Service, nor are they investigating even when sexual assault against them is reported.[35]

On 15 April 2014, in National Legal Services Authority v. Union of India, the Supreme Court of India ruled that transgender people should be treated as a third category of gender and as a socially and economically “backward” class entitled to proportional access and representation in education and jobs.[36]