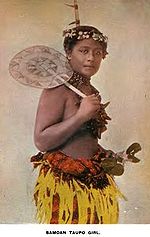 In the foreword to Coming of Age in Samoa, Mead’s advisor, Franz Boas, wrote of its significance:

Mead’s findings suggested that the community ignores both boys and girls until they are about 15 or 16. Before then, children have no social standing within the community. Mead also found that marriage is regarded as a social and economic arrangement where wealth, rank, and job skills of the husband and wife are taken into consideration.

Another influential book by Mead was Sex and Temperament in Three Primitive Societies.[2] This became a major cornerstone of the feminist movement, since it claimed that females are dominant in the Tchambuli (now spelled Chambri) Lake region of the Sepik basin of Papua New Guinea (in the western Pacific) without causing any special problems. The lack of male dominance may have been the result of the Australian administration’s outlawing of warfare. According to contemporary research, males are dominant throughout Melanesia (although some believe that female witches have special powers). Others have argued that there is still much cultural variation throughout Melanesia, and especially in the large island of New Guinea. Moreover, anthropologists often overlook the significance of networks of political influence among females. The formal male-dominated institutions typical of some areas of high population density were not, for example, present in the same way in Oksapmin, West Sepik Province, a more sparsely populated area. Cultural patterns there were different from, say, Mt. Hagen. They were closer to those described by Mead.

Mead stated that the Arapesh people, also in the Sepik, were pacifists, although she noted that they do on occasion engage in warfare. Her observations about the sharing of garden plots among the Arapesh, the egalitarian emphasis in child rearing, and her documentation of predominantly peaceful relations among relatives are very different from the “big man” displays of dominance that were documented in more stratified New Guinea cultures – e.g. by Andrew Strathern. They are a different cultural pattern.

In brief, her comparative study revealed a full range of contrasting gender roles: