The phenomenon of the missing women of Asia is a shortfall in the number of women in Asia relative to the number that would be expected if there were no sex-selective abortion and female infanticide and if the newborn of both sexes received similar levels of health care and nutrition.

Technologies that enable prenatal sex selection have been commercially available since the 1970s. The phenomenon was first noted by the Indian Nobel Prize–winning economist Amartya Sen in an essay in The New York Review of Books in 1990,[1] and expanded upon in his subsequent academic work. Sen originally estimated that more than a hundred million women were “missing” (in the sense that their potential existence had been eliminated either through sex selective abortion, infanticide or inadequate nutrition during infancy).

The disparity has also been found in the Chinese and Indian diasporas in the United States, albeit to a far lesser degree than in Asia. An estimated 2000 Chinese and Indian female fetuses were aborted between 1991 and 2004, and a shortage can be traced back as far as 1980.[2]

Some countries in the former Soviet Union also saw declines in female births after the revolutions of 1989, particularly in the Caucasus region.[3]

Originally some other economists, notably Emily Oster, questioned Sen’s explanation, and argued that the shortfall was due to higher prevalence of the hepatitis B virus in Asia compared to Europe, while her later research has established that the prevalence of hepatitis B cannot account for more than an insignificant fraction of the missing women.[4] As a result, Sen’s explanation for the phenomenon is still the most accepted one. 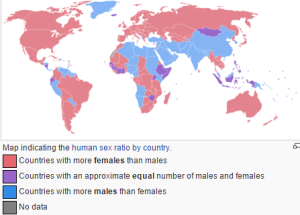 The problem and prevalence

According to Sen, women make up the majority of the world’s population, even though this is not the case throughout every country. While there are typically more women than men in European and North American countries (at around 0.98 men to 1 woman for most of them, in number of males for each female), the sex ratio of developing countries in Asia, as well as the Middle East, is much higher (in number of males for each female). This runs contrary to research that females tend to have better survival rates than males, given the same amount of nutritional and medical attention.[1][5]

In China, the ratio of men to women is 1.06, far higher than most countries. The ratio is much higher than that for those born after 1985, when ultrasound technology became widely available. Translating this into an actual number means that in China alone, there are 50 million women “missing” – that should be there but are not. Adding up similar numbers from South and West Asia results in a number of “missing” women higher than 100 million.[1] According to Sen, “These numbers tell us, quietly, a terrible story of inequality and neglect leading to the excess mortality of women.”[1]

Sen argued that the disparity in sex ratio across eastern Asian countries like India, China, and Korea when compared to North America and Europe, as seen in 1992, could only be explained by deliberate nutritional and health deprivations against female children. These deprivations are caused by cultural mechanisms, such as traditions and values, that vary across countries and even regionally within countries.[6] Due to the inherent bias toward male children in many of these countries, female children, if born despite many instances of sex-selective abortion, are born without the same sense of priority given to men. This is especially true in the medical care given to men and women, as well as prioritizing who gets food in less privileged families, leading to lower survival rates than if both genders were treated equally.[7]

According to Sen’s cooperative conflict model,[8] the relations within the household are characterized by both cooperation and conflict: cooperation in the addition of resources and conflict in the division of resources among the household. These intra-household processes are influenced by perceptions of one’s self-interest, contribution and welfare. One’s fall back position is the situation for each party once the bargaining process has failed and also determines the ability of each party to survive outside of the relationship.[8]

Typically, the fall-back position for men who have land ownership rights, more economic opportunities and less care work related to children is better than a woman’s fall-back position, who is dependent on her husband for land and income. According to this framework, when women lack a perception of personal interest and have greater concern for their family welfare gender inequalities are sustained. Sen argues that women’s lower bargaining power in household decision contributes to the shortfall in female populations across eastern Asia.[8]

The sex ratio by country for the population aged below 15. Red represents more women, blue more men than the world average of 1.06 males/female.

Sen suggests that the care and nutrition female children receive may be positively correlated to the outside earning power and sense of contribution of women when compared to men. Not all forms of outside work contribute equally to increasing women’s bargaining power in the household as Sen also points out that the kind of outside work women do has bearing on their entitlements and fall-back position. Women can be doubly exploited as in the case of the work done by lace-makers in Narsapur, India. Since the work was done in the home it was perceived as only supplementary to male work rather than gainful outside contribution.[8]

Perspectives outside of southeast Asia

The pattern of “missing women” is not uniform in all parts of developing nations.[11] For example, there is an “excess” of women in Sub-Saharan Africa rather than a deficit. The ratio of women to men being around 1.02.[1] In Sub-Saharan Africa, a woman is generally able to earn income from outside the home, increasing her contributions to her household and contributing to a different overall view of the value of women compared to that of Southeast and East Asia. Sen implies that it is a woman’s opportunity to participate in the labor force that affords her more bargaining power within the home. Sen is hopeful that policies aimed to address education, women’s property rights as well as economic rights and opportunities outside the home may improve the missing women situation and fight the stigma attached to female children.[9]

Sen’s contention about gainful work outside the home has led to some debates. Berik and Bilginsoy researched Sen’s premise that women’s economic opportunities outside of the home will diminish the disparity in the sex ratio in Turkey. They found that as women participated more in the work force and maintained their unpaid labor the sex ratio disparity grew, contrary to Sen’s original prediction.[12]

The sex ratio by country for the population aged above 65. Red represents more women, blue more men than the world average of 0.79 males/female.

Later, in 2001, in response to the preliminary findings of the Indian Census, Sen amended his original argument to account for a new kind of discrimination against women being found in various states of India. Women’s increased educational attainment was associated with the rise in the population sex ratio of India.[6]

Similarly, as women were able to afford better healthcare and economic opportunities outside the home they increasingly had access to healthcare facilities including ultrasound treatment. This, according to Sen, is actually exacerbating the problem, allowing parents to screen out the unwanted female fetuses before they are even born. He referred to this inequality as “high tech sexism.” Sen concluded that these biases against women were so “entrenched” that even relative economic improvements in the lives of households have only enabled these parents a different avenue for rejecting their female children. Sen then argued that instead of just increasing women’s economic rights and opportunities outside the home a greater emphasis needed to be placed on raising consciousness to eradicate the strong biases against female children.[6]

One reason for parents, even mothers, to avoid daughters is the traditional patriarchal culture in the countries where the elimination of females takes place. As parents grow older they can expect much more help and support from their independent sons, than from daughters, who after getting married become in a sense property of their husbands’ families, and, even if educated and generating significant income, have limited ability to interact with their natal families. Women are also often practically unable to inherit real estate, so a mother-widow will lose her family’s (in reality her late husband’s) plot of land and become indigent if she had had only daughters. Poor rural families have meager resources to distribute among their children, which reduces the opportunity to discriminate against girls.[13]