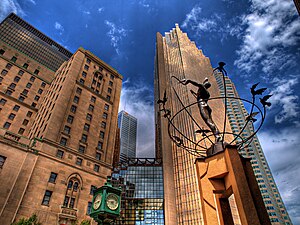 Multiculturalism describes the existence, acceptance, or promotion of multiple cultural traditions within a single jurisdiction, usually considered in terms of the culture associated with an ethnic group. This can happen when a jurisdiction is created or expanded by amalgamating areas with two or more different cultures (e.g. French Canada and English Canada) or through immigration from different jurisdictions around the world (e.g. Australia, Canada,United States, United Kingdom, and many other countries).

Multicultural ideologies and policies vary widely,[1] ranging from the advocacy of equal respect to the various cultures in a society, to a policy of promoting the maintenance of cultural diversity, to policies in which people of various ethnic and religious groups are addressed by the authorities as defined by the group to which they belong.[2][3]

Multiculturalism that promotes maintaining the distinctiveness of multiple cultures is often contrasted to other settlement policies such as social integration, cultural assimilation and racial segregation. Multiculturalism has been described as a “salad bowl” and “cultural mosaic”.[4]

Two different and seemingly inconsistent strategies have developed through different government policies and strategies. The first focuses on interaction and communication between different cultures; this approach is also often known as interculturalism. The second centers on diversity and cultural uniqueness which can sometimes result in intercultural competition over jobs among other things and may lead to ethnic conflict.[5][6] Cultural isolation can protect the uniqueness of the local culture of a nation or area and also contribute to global cultural diversity.[7][8] A common aspect of many policies following the second approach is that they avoid presenting any specific ethnic, religious, or cultural community values as central.[9]