The earliest undisputed art originated with the Aurignacian archaeological culture in the Upper Paleolithic. However, there is some evidence that the preference for the aesthetic emerged in the Middle Paleolithic, from 100,000 to 50,000 years ago. Some archaeologists have interpreted certain Middle Paleolithic artifacts as early examples of artistic expression.[3][4] The symmetry of artifacts, evidence of attention to the detail of tool shape, has led some investigators to conceive of Acheulean hand axes and especially laurel points as having been produced with a degree of artistic expression.

Similarly, a zig-zag etching made with a shark tooth on a freshwater clam-shell around 500,000 years ago (i.e. well into the Lower Paleolithic), associated with Homo erectus, was proposed as the earliest evidence of artistic activity in 2014.[5]

The Mask of La Roche-Cotard has been taken as evidence of Neanderthal figurative art, although in a period post-dating their contact with Homo sapiens. There are other claims of Middle Paleolithic sculpture, dubbed the “Venus of Tan-Tan” (before 300 kya)[6] and the “Venus of Berekhat Ram” (250 kya). In 2002 in Blombos cave, situated in South Africa, stones were discovered engraved with grid or cross-hatch patterns, dated to some 70,000 years ago. This suggested to some researchers that early Homo sapiens were capable of abstraction and production of abstract art or symbolic art. 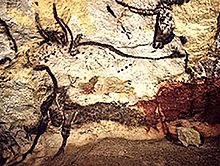 The oldest undisputed works of figurative art were found in the Schwäbische Alb, Baden-Württemberg, Germany. The earliest of these, the Venus figurine known as the Venus of Hohle Fels and the Löwenmensch figurine date to some 40,000 years ago. 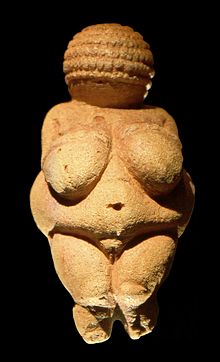 Further depictional art from the Upper Palaeolithic period (broadly 40,000 to 10,000 years ago) includes cave painting (e.g., those at Chauvet, Altamira, Pech Merle, and Lascaux) and portable art: Venus figurines like the Venus of Willendorf, as well as animal carvings like the Swimming Reindeer, Wolverine pendant of Les Eyzies, and several of the objects known asbâtons de commandement.

Image of a horse from the Lascaux caves.

Cave paintings from the Indonesian island of Sulawesi were in 2014 found to be 40,000 years old, a similar date to the oldest European cave art, which may suggest an older common origin for this type of art, perhaps in Africa.[7]

Monumental open air art in Europe from this period include Côa Valley and Mazouco in Portugal, Domingo García and Siega Verde in Spain, and Fornols-Haut in France.

A cave at Turobong in South Korea containing human remains has been found to contain carved deer bones and depictions of deer that may be as much as 40,000 years old.[8] Petroglyphs of deer or reindeer found at Sokchang-ri may also date to the Upper Paleolithic. Pot shards in a style reminiscent of early Japanese work have been found at Kosan-ri on Jeju island, which, due to lower sea levels at the time, would have been accessible from Japan.[9]

The oldest petroglyphs are dated to approximately the Mesolithic and late Upper Paleolithic boundary, about 10,000 to 12,000 years ago. The earliest undisputed African rock art dates back about 10,000 years. The first naturalistic paintings of humans found in Africa date back about 8,000 years apparently originating in the Nile River valley, spread as far west as Mali about 10,000 years ago. Noted sites containing early art include Tassili n’Ajjer in southern Algeria, Tadrart Acacus in Libya (A Unesco World Heritage site), and the Tibesti Mountains in northern Chad.[10] Rock carvings at the Wonderwerk Cave in South Africa have been dated to this age.[11]Contentious dates as far back as 29,000 years have been obtained at a site in Tanzania. A site at the Apollo 11 Cave complex in Namibia has been dated to 27,000 years.