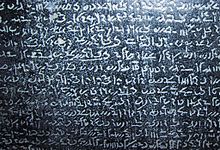 The Rosetta stone has several different languages carved into it

Symbols are the basis of culture. A symbol is an object, word, or action that stands for something else with no natural relationship that is culturally defined. Everything one does throughout their life is based and organized through cultural symbolism. Symbolism is when something represents abstract ideas or concepts. Some good examples of symbols/symbolism would be objects, figures, sounds, and colors. For example in the Hawaiian culture, the performance of a Lua is a symbol of their land and heritage which is performed through song and dance [8] . Also, they could be facial expressions or word interpretations. Symbols mean different things to different people, which is why it is impossible to hypothesize how a specific culture will symbolize something. Some symbols are gained from experience, while others are gained from culture. One of the most common cultural symbols is language. For example, the letters of an alphabet symbolize the sounds of a specific spoken language.

Symbolism leads to the “Layers of Meaning” concept. Culture is the meaning that is shared to provide guiding principles for individual meaning.

Language is the most often used form of symbolism. There are 6,912 known living languages, and the diversity is caused by isolation. Most languages have a different “symbol” for each letter, word, or phrase. The use of symbols is adaptive, that means that humans can learn to associate new symbols to a concept or new concepts with a symbol. An example may be drawn from two populations who speak different languages that come into contact with one another and need to communicate. They form a language that has a large degree of flexibility in using either language’s symbols (in this case patterns of sound) or a hybrid set of symbols to communicate messages back and forth. This contact language, or pidgin gradually gives way to a creole with a more formal set of symbols (words), grammatical rules for their organization, and its own native speakers who transmit the language from generation to generation.

It is important for anthropologists to consider their own cultural background when looking at symbolism in a different culture. This is because many symbols, though similar in appearance, can mean drastically different things. These symbols can best be understood or interpreted though the eyes of the culture that they pertain to, otherwise they may loose their unique significance. One example of a misinterpreted cultural symbol is the “whirl log” symbol commonly used in Southwestern Native American blanket weaving. This symbol is almost identical to the Nazi Swastika, and therefore brings a negative response from many Americans. Although the Native American symbol has nothing to do with Nazi or Germanic symbolism, this design is rarely used on blankets today because of the symbolic misinterpretation. [9]