Tribal art is the visual arts and material culture of indigenous peoples. Also known as ethnographic art, or, controversially, primitive art,[2] tribal arts have historically been collected by Western anthropologists, private collectors, and museums, particularly ethnographic and natural history museums. The term “primitive” is criticized as being Eurocentric and pejorative.[3] 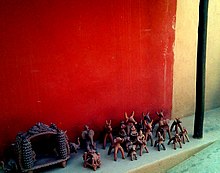 Artwork in the Museum of Indian Terracotta, New Delhi, India.[1]

Tribal art is often ceremonial or religious in nature.[4] Typically originating in rural areas, tribal art refers to the subject and craftsmanship of artefacts from tribal cultures.

Collection of tribal arts has historically been inspired by the Western myth of the “noble savage”, and lack of cultural context has been a challenge with the Western mainstream public’s perception of tribal arts.[6] In the 19th century, non-western art was not seen by mainstream Western art professional as being as art at all.[3] The art world perception of tribal arts is becoming less paternalistic, as indigenous and non-indigenous advocates have struggled for more objective scholarship of tribal art. Before Post-Modernism emerged in the 1960s, art critics approached tribal arts from a purely formalist approach,[7] that is, responding only to the visual elements of the work and disregarding historical context, symbolism, or the artist’s intention.