All amino acids have the same backbone structure, with an amino group (the α-amino, or alpha-amino, group), a carboxyl group, an α-hydrogen, and a variety of functional groups (R) all attached to the α -carbon.

The general structure of an α-amino acid. The acidic group is a carboxylic acid. The carbon that is attached to the carboxylic acid is the α-carbon. If the R group were a carbon atom, it would be the β -carbon. 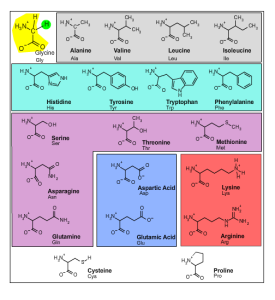 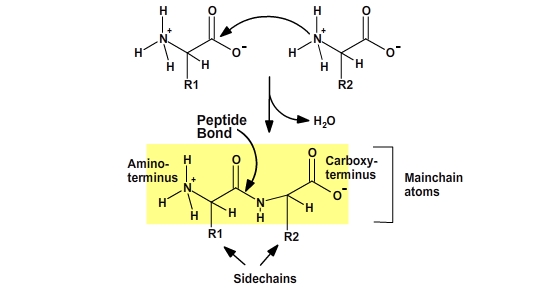 Peptide bond formation occurs by a dehydration reaction. The amino group of the second amino acid attaches to the carbonyl carbon of the first, forming the peptide bond and releasing water. The resultant dipeptide has an amino terminus (left) and a carboxy terminus (right). The main-chain atoms, which are the same for each residue in the peptide, include the nitrogen and its proton, the α-carbon and its hydrogen, and the C=O group. The R groups form the side-chain atoms.

The resulting peptide chain is linear with defined ends. Short polymers (less than 50 residues or amino acids) are usually referred to as peptides, and longer polymers as polypeptides. Several polypeptides together can form some large proteins. Because the synthesis takes place from the alpha-amino group of one amino acid to the carboxyl group of another amino acid, the result is that there will always be a free amino group on one end of the growing polymer (the N-terminus) and a free carboxyl group on the other end (the C-terminus).

Note that after the amino acid has been incorporated into the protein, the charges on the amino and carboxy termini have disappeared, thus the main-chain atoms have become polar functional groups. Since each residue in a protein has exactly the same main-chain atoms, the functional properties of a protein must arise from the different side-chain groups.

Primarily located in the cell nucleus (hence the name) nucleic acids are replicating macromolecules. The most important are DNA and RNA. Without them, cells could not replicate, making life impossible. These molecules store the cell’s “software”—the instructions that govern its function, processes and structure. The code is comprised of sequences of four bases—adenine, cytosine, guanine and thymine (uracil in RNA). These are arranged in sets of three called triplets. Each triplet specifies an amino acid, which in turn is a component of a protein macromolecule. All the intricate complexity of the human body arises from the information encoded by just four chemicals in a single long DNA macromolecule.

In humans, mistakes in the structures of DNA and RNA cause diseases, including sickle cell anemia, hemophilia, Huntingdon’s chorea and some types of cancer. Even a small error can result in a dramatic effect. Sickle cell disease is caused when just one amino acid in the DNA base sequence is changed. Through directing chemical processes, nucleic acids instruct cells how to differentiate into various organs. During development, whole sets of DNA sequences are shut down or activated to drive specific processes. These processes lead to different kinds of cells that form organs such as the heart, liver, skin and brain.

Within the cell, nucleic acids are in turn organized into higher-level structures called chromosomes. You can see chromosomes with a light microscope, using an appropriate stain. Early study of chromosomes helped scientists discover and understand the role of nucleic acids in cellular reproduction. Errors in chromosomal structure lead to malfunctions of life processes. For example, in humans, an extra chromosome 21 results in Down Syndrome. 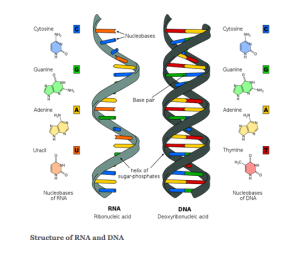 Structure of RNA and DNA

Our genetic code is determined by only four bases in DNA (G, C, A, T), which are repeated and arranged in a special order. For example,

This may seem like a random string of G, C, A, T, but this DNA codes for human insulin. DNA is organized into a linear polymer in a double helix and maintains the inherited order of bases or genetic code. The “steps” of the DNA ladder have the code that ultimately directs the synthesis of our proteins. This linear polymer of genetic code is maintained when double strand DNA is transcribed to single strand RNA. 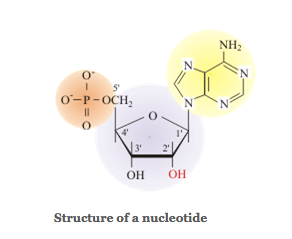 Structure of a nucleotide

The fundamental unit of DNA is the nucleotide. The nucleotide contains a phosphate group (shown in orange), which will eventually give the DNA polymer its charge and interconnect nucleotides on the backbone. The furanose sugar group is a five-sided sugar (shown in purple). The nitrogenous base (shown in yellow) determines the type of nucleotide formed.

The numbering of the positions on the sugar furanose rings of DNA and RNA follow a convention that uses ‘ (the prime symbol) to denote the sugar positions. Thus, the ribose has a nitrogenous base connected to the 1′ position and hydroxyl groups (OH) on the 2′, 3′ and 5′ positions. Using this nomenclature, deoxyribose is formally called 2′-deoxyribose (2 prime deoxyribose) to denote the loss of the hydroxyl at the 2’ position of ribose. 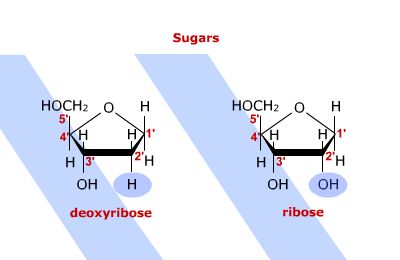 The linkage of individual nucleotides is made by a bridging phosphate molecule between two hydroxyl groups, one on each furanose ring. The resulting polymer is a string of furanose molecules linked by phosphodiester bonds in one very long macromolecule. 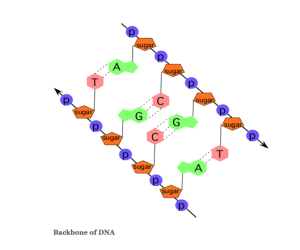 The following is a list of structural characteristics of the DNA/RNA polymer backbone.

The DNA double helix is held in place with the hydrogen bonding of purines to pyrimidines. 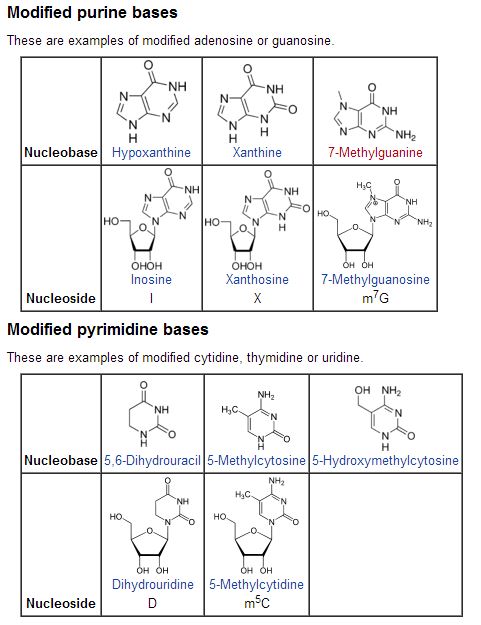 Recall that hydrogen bonds are weak interactions, not like the covalent bonds of the phosphate-furanose backbone. Thus, DNA is held together, but can be pulled apart for transcription to RNA or for DNA replication.

To maintain equal distance between the two strands of DNA, the larger purines must bind with the smaller pyrimidines. Specifically, A always binds with T and G always binds with C in DNA. A useful memory device is that A and T are angular letters and G and C are both curvy.

DNA replication: Every time a cell divides, all of the DNA of the genome is duplicated (called replication) so that each cell after the division (called a daughter cell) has the same DNA as the original cell (called the mother cell).

DNA transcription: For the genetic code to become a protein, it goes through a transcription step. DNA is transcribed into RNA (a single-strand nucleic acid). The RNA is then shuttled away from the DNA to the region of protein synthesis.

RNA translation: RNA is translated from a nucleic acid code into the amino acid sequence of a protein.

Lipids include fats and waxes. Several vitamins, such as A, D, E and K, are lipid soluble. Perhaps the most important role of lipids is in forming the membranes of cells and organelles. In this way, lipids enable isolation and control of chemical processes. They also play a role in energy storage and cell signaling.

Lipid molecules forming cell membranes are comprised of a hydrophilic “head” and hydrophobic “tail” (remember, “hydro” means water and “philos” means love; “hydro” means water, “phobic” means fear). A phospholipid bilayer is formed when the two layers of phospholipid molecules organize with the hydrophobic tails meeting in the middle. Scientists believe that the formation of cell-like globules of lipids was a vital precursor to the origin of cellular life, since membranes physically separate intracellular components from the extracellular environment. Thus, lipid membranes enclose other macromolecules, confine volumes to increase the possibility of reaction, and protect chemical processes. Proteins with hydrophobic regions float within the lipid bilayer. These molecules govern transport of charged or lipophobic molecules in and out of the cell, such as energy molecules and waste products. Some of these lipids also have attached carbohydrate molecules jutting out of the membrane are important for cell recognition as mentioned previously.