Even though we may not feel any changes from day to day, we are constantly repairing and replacing cells within our bodies. It’s estimated that approximately 300 million cells die every minute in our body! These cells must be replaced by identical functional cells for us to survive and maintain homeostasis. The process of cell proliferation or cell division is termed mitosis. Mitosis produces two daughter cells that are identical (clones) to the parent cell.

Cell division is a carefully regulated process. There are “check-points” between phases, in which the cell “self-checks.” Through molecular interactions, the cell makes sure that it is ready to divide; for example, it checks to see that its DNA has not been damaged. If all criteria are met, the cell moves forward through the cell cycle. Normal cells usually divide only a limited number of times, and usually do so when stimulated by certain molecular signals. For example, if you move to higher altitude, your body will produce more red blood cells in order to supply enough oxygen despite the thinner air.

Mitosis is also regulated by genes. Some genes become active to stimulate mitosis and other genes act as the brakes to turn it off (suppressor genes). If our body loses control over mitosis the result would be the production of too many (hyperplasia) abnormal cells and would form a tumor. If the tumor is encapsulated it is termed benign. If not, the mutated cells can spread and it is known as cancer. Cancer cells, on the other hand, have lost the normal cell cycle controls, and therefore can divide indefinitely.

When a cell is performing its normal day-to-day functions it is in a state termed interphase. When it is time for that cell to replicate, genes become active and stimulate it to begin mitosis. Mitosis is characterized by four phases. Remember if a cell is going to form 2 new identical cells it must first replicate it’s DNA and organelles. It is during interphase that the DNA is replicated to form 2 identical strands. These strands of identical DNA are termed chromatids and are held together with a centromere.

The stages of mitosis occur in sequence with specific events in each one. It is only during mitosis that chromosomes are visible. Usually DNA is in its threadlike chromatin form. You can identify the stages of mitosis by observing the chromosomes. Remember that the DNA is in the nucleus which is surrounded by the nuclear membrane. The DNA needs to be free from the nucleus so it can be evenly distributed to two daughter cells. The events of mitosis describe the processes of splitting and moving nuclear DNA to opposite ends of the parent cell where the nuclear membranes will reform. Then the cell membrane can split the cytoplasm and organelles (termed cytokinesis). The two daughter cells will each have the same genetic code. When you studied the cell you learned about the microtubules of the centrioles. They are the organelles that will move the DNA during mitosis.

The major stages of mitosis are:

Mitosis begins when DNA condenses into chromosomes visible under a light microscope. This packaging of the chromosomes into condensed bundles makes them easier to sort, but it inhibits protein synthesis. Therefore, it is essential that the cell has produced all necessary proteins prior to the start of this process. 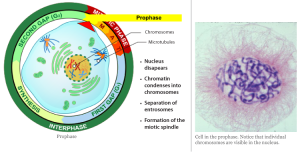 The nucleoli disappear and the nuclear envelope begins to disintegrate. This allows cellular components to act upon the chromosomes (the chromosomes are no longer tucked away inside the nucleus).

Centrioles, contained in the centrosomes formed during interphase, are areas where microtubules originate in order to help sort and organize the sister chromatids. The centrioles begin to move to the opposite poles of the cell. This will determine where the chromosomes go when they are sorted.

Microtubules are disassembled from the cytoplasm and reassembled into the mitotic spindle. This structure will move the chromosomes to the proper location.

This stage is called “prophase,” because it is a preparatory stage. “Pro-” means “before;” “phase” means “stage.” So, this is the stage before the process gets into full swing.

Prometaphase is the stage between prophase and metaphase. During this stage, the nuclear envelope is fully broken down. This allows the microtubules to attach to the centromeres of the chromosomes. 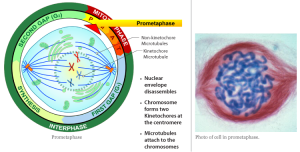 Metaphase is so named because the chromosomes line up in the middle of the cell. The root “meta-” means “middle.” 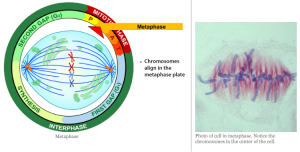 During anaphase, the kinetochore proteins break down the microtubules attached to them and the connections between each copy of the chromosome will be broken down. This causes the individual chromosomes to move to opposite poles of the cell. The root “ana-” refers to “apart”; the chromosomes are moving apart from each other. 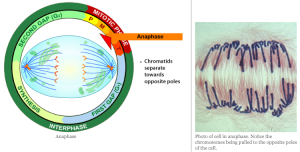 In telophase, the nuclei at each pole form again. The chromosomes are now separated into two identical nuclei. This is the end of mitosis.

However, the two nuclei are still in a single cell. The next step will separate the cytoplasm into two cells. “Telo” comes from the Greek word for “end.

Cytokinesis is the separation of the cytoplasm into two new daughter cells. Animal cells divide when proteins pinch in the center of the cell until it separates into two. This region is called the cleavage furrow. 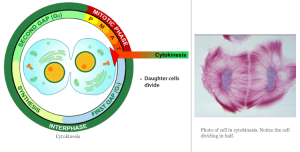 Plant cells divide when new cell wall components are laid down in the center of the cell. This is called the cell plate.

How does a single fertilized cell develop into something as marvelous and intricate as the human body? Part of the answer is apoptosis, or programmed cell death. For example, the early hand of an embryo is a stubby appendage. As cells between the fingers selectively die off, they sculpt the hand, leaving behind the separate fingers. In adults, apoptosis is one way that tissues maintain their integrity. Cells selectively die off to allow renewal of tissues such as the stomach, lungs, liver and so on. If apoptosis ceases in the tissue’s cells, a tumor can form, perhaps becoming cancerous. Apoptosis is distinguished from necrosis, which is cell death as a result of injury. Much like proliferation, there is a series of tightly regulated events that lead to apoptosis. Apoptosis is a cellular program that is internally determined, and billions of cells die this way every day. However, external trauma, toxins or infection cause a different type of cell death called necrosis. Even though both mechanisms lead to dead cells, apoptosis is a program to maintain cell number whereas necrosis is a consequence of intense cell damage.