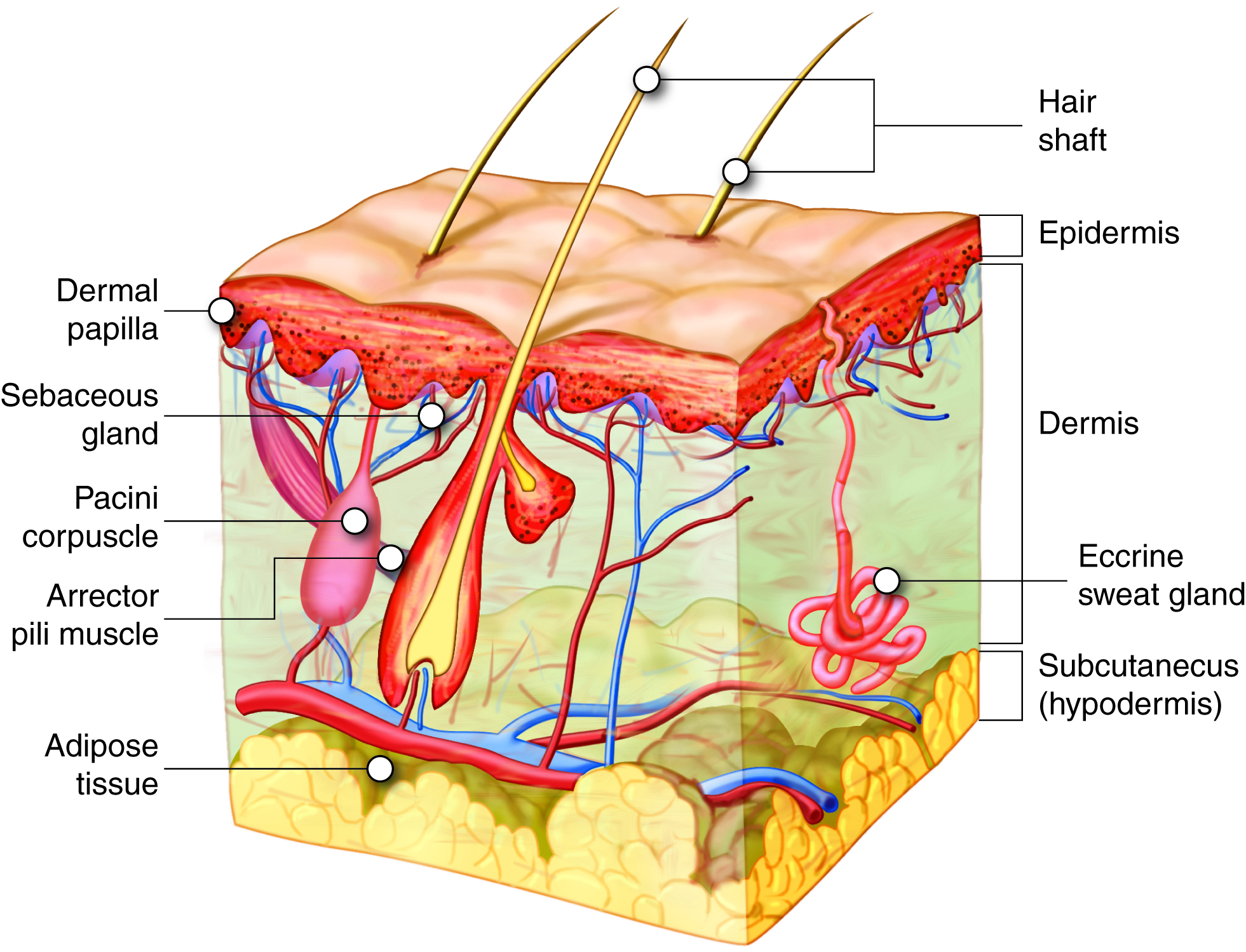 Hair is part of the integumentary system. Strands of hair originate from the base of the downward extension of living epithelial cells into the dermis that is called the hair follicle. Hair follicles are surrounded by the dermis, but the cells are part of the epidermis and are separated from the dermis by basal lamina layer. Hair forms in a manner similar to the skin: rapid division and differentiation of stem cells into keratinocytes that get pushed up and become flattened, dead, keratinized cells. The part of hair that is exposed on the skin surface is called the hair shaft, and the rest of the follicle is called the hair root. The bulge at the base of the hair root is called the hair bulb, which is made up of a layer of basal cells called the hair matrix. The hair matrix contains the cells that rapidly divide to form the hair. The hair bulb surrounds the hair papilla (made up of connective tissue, blood capillaries and nerve endings). 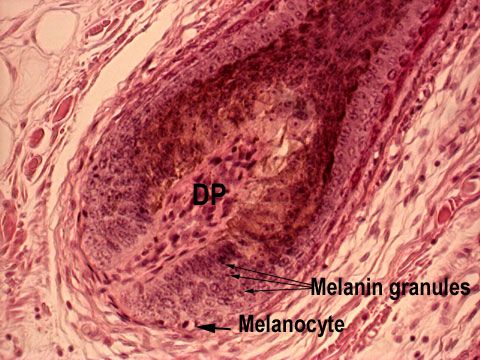 With permission from Jesus Lozano and Lorena Monarrez (172X10_hair_bulb_labelled) 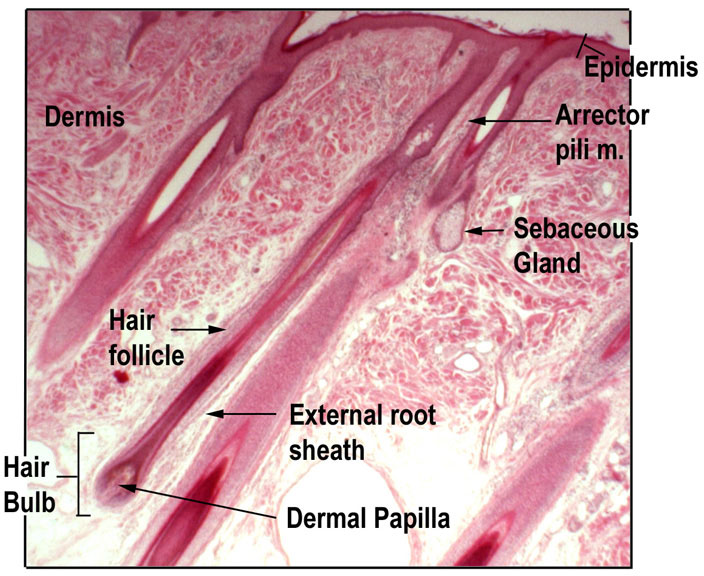 With permission from Jesus Lozano and Lorena Monarrez (172-1x-Hair_follicle_labelled)

Just as the layers of the skin form on the inner layers and get pushed out to the surface as the dead skin on the surface sheds, basal cells in the center of the hair bulb divide to form layers of keratinocytes that form the medulla, cortex, and cuticle of the hair bulb. These layers are visible in a longitudinal section of the hair follicle. Keratin formation starts in the cells of the medulla and the keratin continues to be produced in the cortex and cuticle. Keratinization is completed as the cells are pushed to the skin surface to form the shaft of hair that is externally visible. The external hair is composed entirely of keratin.

Hair serves a variety of functions. For example, hair on the head protects it from the sun and from heat loss; and hair in the nose and ears and around the eyes (eyelashes) defends the body by trapping dust particles that may contain allergens and microbes. Hair on the eyebrows prevents sweat and other particles from bothering the eyes. Hair also has a sensory function due to innervation of the hair papilla. Hair is extremely sensitive to changes in the environment, much more so than the skin surface. The hair root is connected to smooth muscles called arrector pili that contract in response to stimuli, making the external hair shaft “stand up.” This is visible in humans as goose bumps and even more obvious in animals, such as when a frightened cat’s fur puffs out. In many animals, the puffing out makes the animal appear larger, and could possibly enable it to scare off a predator. Another advantage of this ability to cause the hair to stand up is that it can trap air and can act as an insulator, decreasing heat loss.

Hairs grow during a phase called anagen, and they are eventually shed, only to be replaced by newer ones. When hair is naturally ready to be shed, the follicle becomes inactive during a phase called catagen. The follicle then becomes smaller, and becomes detached from the dermal papilla at the base, during the phase called telogen. The basal cells in the hair matrix then produce a new hair follicle during anagen. Hair typically grows at the rate of 0.3 mm per day and can continue growing for two to five years before being shed. About 50 hairs may be lost and replaced per day. Hair loss occurs if there is more hair shed than what is replaced, and it can happen due to hormonal or dietary changes.

Just like the skin, hair gets its color from the pigment melanin, produced by melanocytes in the hair matrix. Different hair color results from differences in the type of melanin, which is genetically determined. As a person ages, the melanin production decreases and hair tends to lose its color, becoming gray and/or white.

Many individuals can experience hair thinning and/or loss with advanced age. This is called alopecia. This can lead to complete hair loss, called baldness. Most baldness is caused by a genetic sensitivity of hair follicles to the androgen hormone dihydrotestosterone (DHT). DHT causes the hair follicle to receive less blood flow, so that the hair follicle begins to atrophy and any hair that is produced is thin. 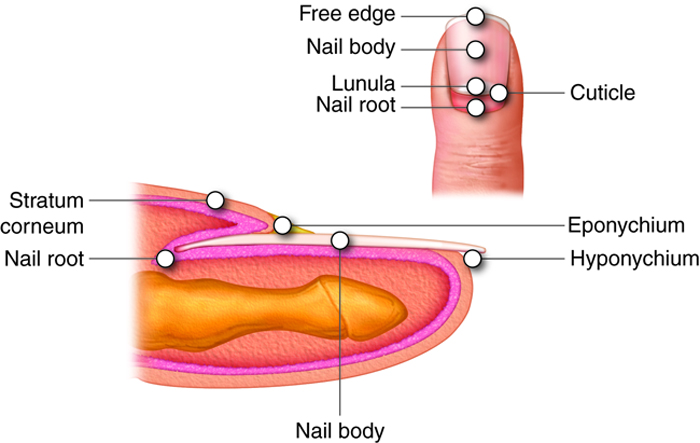 The nail is a specialized structure of the epidermis that occurs at the tips of our fingers and toes. The nail body is formed on the nail bed, and it is designed to protect the tips of our fingers and toes, as they are the farthest extremities and the parts of the body that experience the maximum mechanical stress. The epidermis in this part of the body has evolved a specialized structure upon which nails can form. The nail body forms at the nail root. Lateral nail folds, folds of skin that overlap the nail on its side, help anchor the nail body. The nail fold that meets the proximal end of the nail body forms the nail cuticle, also called the eponychium. The nail bed is rich in blood vessels, making it appear pink, except at the base, where there is a crescent-shaped region called the lunula. The nail body is composed of keratin-rich, densely packed dead keratinocytes. The area beneath the free edge of the nail, where debris gets lodged, is called the hyponychium.

When the body becomes overheated, sweat is produced to cool the body’s temperature and prevent overheating. There are two types of sweat glands responsible for excreting sweat — eccrine (merocrine) sweat glands and apocrine sweat glands. Eccrine glands are present throughout the skin surface, especially on the palms of the hand, the soles of the feet, and the forehead. Like hair and nails, they are derived from the epidermis. They are coiled glands that lie in the dermis, with the duct opening to a pore on the skin surface, where the sweat is released (although some may open into hair follicles, like sebaceous glands). The sweat released by eccrine sweat glands is mostly water, with some salt, antibodies, traces of metabolic waste, and a microbe-killing compound called dermcidin. The main function of eccrine sweat glands is to help regulate body temperature through evaporation.

Apocrine glands are usually associated with hair follicles and are activated in densely hairy areas like armpits and genitals. They are larger than merocrine sweat glands and lie deeper in the dermis, sometimes even reaching the hypodermis. They release a thicker fluid due to a higher concentration of fatty acids, which may give it a whitish color. These fats are often decomposed by bacteria on the skin, resulting in an unpleasant odor, commonly called body odor. Apocrine glands do not begin to function until puberty. Apocrine sweat glands are stimulated during emotional stress and sexual excitement.

Sebaceous glands are oil glands that are found all over the body. Most are associated with hair follicles. They generate and excrete a mixture of lipids, called sebum, onto the hair and skin surface, thereby naturally lubricating the dry and dead layer of keratinized cells of the stratum corneum and hair shaft. Sebum also has antibacterial properties, and prevents water loss from the skin in low-humidity environments. The secretion of sebum is stimulated by hormones, many of which do not become active until puberty. Thus, sebaceous glands are relatively inactive during childhood and become active only after puberty has occurred.

Acne is a skin disturbance that typically occurs on areas of the skin that are rich in sebaceous glands (the face and back). It is most common during the onset of puberty due to associated hormonal changes, but can continue into adulthood. Hormones such as androgen and other sex steroid hormones stimulate the release of sebum. When sebaceous glands overproduce and get blocked with sebum, it leads to the formation of blackheads. Blackheads are the result of hyperkeratinization of the area, which causes the formation of a keratin plug and blockage of hair follicles in the area. Blackheads are prone to infection by acne-causing bacteria (i.e. Propionibacterium and Staphylococcus), which leads to redness and swelling. In severe cases, acne can lead to scarring due to the production of scar tissue during the wound healing process.