The plasma membrane is the boundary of the cell; it determines what enters and exits the cell, and how it interacts with its environment. Cells are surrounded by fluid, termed extracellular or interstitial fluid. This fluid contains thousands of substances and the cell needs to be choosy about what it allows in and out through its cell membrane. Cell membranes only allow some molecules through. This characteristic is why cell membranes are selectively permeable. They are not impermeable (not letting anything pass) nor are they freely permeable (letting everything can pass). This quality allows a cell to control what enters and exits it. This section of the course will further explore the ways in which molecules can pass across the membrane.

Passive and Active Passage Through the Cell Membrane

There are two categories used to describe the passage of substances through a cell membrane. They are categorized as passive (the cell does not have to use ATP), but needs some sort of driving force, and active (the cell must use ATP). We will investigate both of these next.

As mentioned, passive processes do not use ATP but do need some sort of driving force. It is usually from kinetic energy in the form of a concentration gradient. Molecules will tend to move from high to low concentrations by the random movement of molecules. There are 3 main types of passive processes.

Diffusion is the movement of molecules from an area of high concentration to an area of lower concentration. There are different types of diffusion: simple in which the molecule passes directly through the phospholipid bilayer and facilitated which uses the integral membrane proteins as channels. Simple diffusion occurs when the molecules are either very small or lipid soluble and pass through the phospholipid bilayer of the cell membrane. Some examples of substances that use this process are oxygen (O2), carbon dioxide (CO2), and lipids.

Have you ever had the pleasant surprise of waking up to the smell of coffee or bacon? It’s the diffusion of the chemicals (odorants) moving from the higher concentration in your kitchen to you! In the human body the diffusion of O2 and CO2 are critical for gas exchange. O2 levels are higher in your arterial blood than your tissue cells so O2 will diffuse out of the blood into your cells. CO2 has the opposite concentration gradient. CO2 levels are highest in your cells (your mitochondria produce CO2 as a waste product from cellular respiration) and CO2 diffuses out of the cell into the blood. These molecules are small enough to pass through the phospholipid bilayer and are examples of simple diffusion. Remember that anything that increases kinetic energy will also increase the rate of diffusion.

Diffusion Across the Membrane

Cells continually encounter changes in their external environment. Most cells have a similar blend of solutes within them, but interstitial or extracellular fluid can vary. What will happen if there is a strong concentration gradient between a cell’s interior and the fluid outside? As you know, molecules will tend to move down their concentration gradients until equilibrium is reached. You might think that solutes will flow into our out of the cell until the solute concentrations are equal across the membrane. However, not all molecules can pass through the cell membrane. The plasma membrane (lipid bilayer) is significantly less permeable to most solutes than it is to water. Therefore the WATER tends to flow in a way that establishes an equal concentration of solutes on either side of the membrane. The water flows down its own concentration gradient, with a net movement toward the region that has a higher concentration of solutes. This movement of water across a semipermeable membrane in response to an imbalance of solute is called osmosis.

The relationship between the solute concentration and amount of water is an inverse relationship. The more concentrated a solution is, the less water it contains. The fewer solutes, the more water – i.e. it is more dilute. Water follows gradients and moves from an area of more water to less water but in reality water is moved to the area with the greater number of solutes. This creates a pressure termed osmotic pressure. Cells cannot actively move water, it must follow osmotic gradients. Solutions that have a greater solute concentration will pull water via osmotic pressure. This depends on the total number of solutes, not the type. Note that some water can pass through the cell membrane but most water passes through protein membrane channels termed aquaporins

Filtration is another passive process of moving material through a cell membrane. While diffusion and osmosis rely on concentration gradients, filtration uses a pressure gradient. Molecules will move from an area of higher pressure to an area of lower pressure. Filtration is non-specific. This means that it doesn’t sort the molecules, they pass due to pressure gradients and their size. If molecules are small enough to pass through the membrane, they will. The force that pushes the molecules is termed hydrostatic pressure.

Filtration is one of the main methods used for capillary exchange. Blood pressure provides the driving force or hydrostatic pressure to force materials out of capillaries to cells or to form the filtrate (fluid in the nephron of the kidney). Hydrostatic pressure is countered by osmotic pressure. Remember osmotic pressure is created due to increased solute concentration and will pull water toward the area of higher solutes. These two pressures must be in balance for homeostasis of fluid volumes. In our body large molecules such as plasma proteins and red blood cells should not pass out of the blood through the cell membranes lining the capillaries. If they pass through and end up in in the tissues or in the kidney and later the urine it is abnormal and a sign of disease.

You have just finished investigating the passive methods of transport, now let’s look at active methods. In active methods the cell must expend energy (ATP) to do the work of moving molecules. Active transport often occurs when the molecule is being moved against its concentration gradient or when moving very large molecules into our out of the cell. There are 3 main types of active processes.

Facilitated diffusion and active transport are not the only ways that materials can enter or leave cells. Through the processes of endocytosis and exocytosis, materials can be taken up or ejected in bulk, without passing through the cell’s plasma membrane.

In endocytosis, material is engulfed within an infolding of the plasma membrane and then brought into the cell within a cytoplasmic vesicle. To begin endocytosis, a particle encounters the cell surface and produces a dimple or pit in the membrane. The pit deepens, invaginates further, and finally pinches off to form a vesicle in the cytoplasm of the cell. Note that during the process the inside surface of the newly formed vesicle is the same as the exterior surface of the cell. Thus the integrity of the cytoplasm and the orientation of the plasma membrane are preserved. Once internalized, this new vesicle containing extracellular materials may fuse with a lysosome so that its solid contents are digested. The resulting molecules may be released to the cytoplasm for use within the cell.

There are two general forms of endocytosis: phagocytosis and pinocytosis. Phagocytosis is the uptake of large solid particles such as bacteria or cellular debris. Pinocytosis is the uptake of fluid and any small molecules dissolved within it. Cells are also capable of recognizing specific particles and engulfing them in a more targeted way, a process called receptor-mediated endocytosis. In this case, the particle first binds to a membrane protein receptor on the surface of the cell. Binding of the target particle induces the cell to engulf it.

How are endocytosis and exocytosis important to everyday life? Immune cells protect animals by recognizing and destroying foreign objects such as bacteria. Disease-causing bacteria are recognized by proteins called receptors on the surface of the immune cell. The phagocytic immune cell will then engulf the bacterial cells (phagocytosis). The vesicle that contains these bacterial cells is called a phagosome (“phago” means “eating” and “-some” refers to “body”). The phagosome next fuses with lysosomes. Finally, the digested bacterial products are excreted through the process of exocytosis. 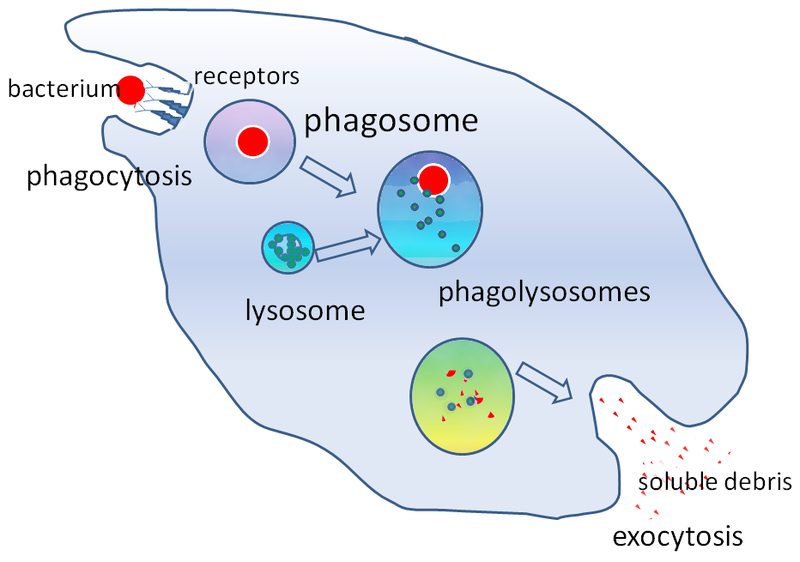