Neurons produce electrical signals as a way of conveying information from one place in the body to another place very quickly, at speeds up to 100 meters/second (200 miles per hour). These rapidly traveling electrical signals allow you to perceive sensory stimuli, like the sound of a passing fire truck blasting its siren. Electrical signals, travelling in different neural pathways, coordinate motor responses that allow you to move your car out of the way of the fire truck, withdraw your hand from a dangerously hot pan, and rhythmically contract your diaphragm to breathe. Electrical signals arise as a result of movement of ions back and forth across the cell membrane of neurons. As ions move down their electrochemical gradients, they carry their charge with them, creating very miniscule but physiologically important electrical currents. These ionic currents flowing across membranes are the basis for the propagating electrical signals that underlie all nervous system functions. In this section, we’ll explore how neurons generate these electrical signals.

Non-excitable cells (ex: intestinal epithelial cells) have a stable and unchanging RMP. Excitable cells, like neurons and muscle, have a membrane potential that can fluctuate under certain conditions, with each fluctuation representing a signal produced by the cell. These fluctuations may be small and local to a region of a cell membrane (often called local or graded potentials) or larger in magnitude and travel along the length of the cell. These latter potentials, called action potentials, always lead to some response by the cells. In a neuron, action potentials lead to neurotransmitter release.

The resting membrane potential (measured as a voltage) is an energy gradient across the cell membrane due to a slight separation of charge right along the cell membrane. This work by Cenveo is licensed under a Creative Commons Attribution 3.0 United States (http://creativecommons.org/licenses/by/3.0/us/).

To understand the basis of the resting membrane potential, we must first investigate the composition of body fluids – intracellular fluid (ICF) and extracellular fluid (ECF). Recall that ICF and ECF are composed of salts like NaCl and KCl that dissociate into their ionic components when placed in aqueous solutions. These ions are the mobile charges in body fluids that move between compartments to generate electrical currents along cell membranes. 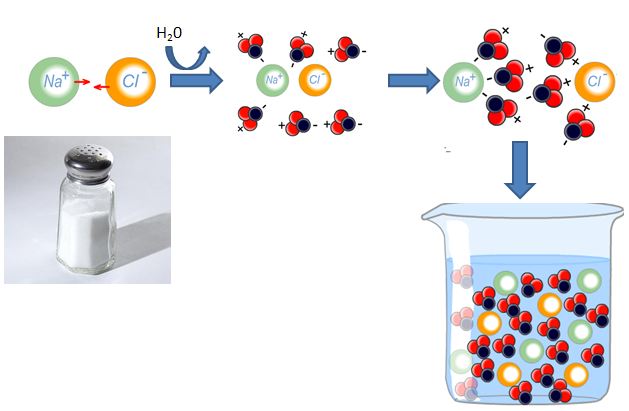 The resting membrane potential arises due to the combined effects of three factors, which determine what ions move across the cell membrane in an unstimulated cell (at rest).

The ionic composition of body fluids is tightly regulated. Small increases or decreases in ion concentrations can disrupt normal functions of the brain, heart, skeletal muscle or other organs. In many instances, you or one of your loved ones may need to receive treatment for an electrolyte imbalance. These situations might be as simple as that restoring blood lost in an accident, or receiving fluids to rehydrate you following a soccer tournament. The article below shows how critically important it is that people receive solutions with appropriate ion concentrations in their treatments.

Let’s review a tragic case where simple calculations to double check a dose of CaCl2 given to a baby to restore body fluids, might have saved her life.

An infant in the intensive-care unit of Seattle Children’s hospital died after she was administered 10 times the dose of a medication, calcium chloride, by a hospital nurse, according to a notice sent by hospital CEO Tom Hansen to the staff.

Eight-month-old Kaia Zautner was in the intensive-care unit of Seattle Children’s hospital, battling back from serious heart problems and surgeries, when a hospital nurse gave her 10 times the proper dose of a medication, calcium chloride.

Five days later, on Sept. 19, after suffering a brain hemorrhage, the baby died.

Tom Hansen, hospital CEO, in a notice to staff on Sept. 22, said the hospital has offered “heartfelt apologies” to the family, without naming them. “This was a catastrophic outcome for the patient and the family, and caused serious distress for staff members as well,” Hansen said.

In a family blog, Kaia’s parents, Jared and Alana Zautner, of Puyallup, had described their baby’s fight to overcome the heart problem she’d had since her birth on Jan. 12 and then, just days after her “8th month birthday,” the “horrible turn of events” that gave them “one of the scariest days of our lives.”

The overdose was an accidental miscalculation, Alana Zautner wrote on the blog, thanking friends for their continued prayers.

“I have seen such strength in my daughter these last few hours and I have faith that she will pull through this,” she wrote. “I just pray for a miracle and that she will be completely touched and healed.”

A memorial for Kaia was held Saturday at Lighthouse Christian Center (Alana wrote that all doctors and nurses were welcome), and a “Hawaii Lei Ceremony and Scattering of the Ashes” is planned for Oct. 2 on Maui, Hawaii.

The hospital, as required, reported the overdose to the state Department of Health, which collects statistics on “adverse events” in hospitals.

The hospital reviewed the clinical record after the overdose and began a detailed analysis of why the usual safety checks had not prevented it, Hansen said in the letter to staff.

“Perhaps the best tribute we can pay to this family is by doing everything we can to prevent future medical errors in our system,” Hansen said in the letter. “An important way we can make medicine safer is if we admit that mistakes occur and openly investigate them. We must learn from these events and work together to evaluate our processes and to error-proof our care processes.”

Hansen said it is personally important to him that all staff and faculty feel safe to report mistakes.

While the investigation is under way, he said, the hospital will allow only pharmacists and anesthesiologists to fill needles with calcium chloride in nonemergency situations, but the drug can still be accessed by medical or nursing staff if needed in an emergency.

Hansen did not say whether the nurse who administered the overdose was disciplined by the hospital.

The state’s Nursing Care Quality Assurance Commission has also opened an investigation, according to Department of Health spokesman Tim Church.

“We don’t even have a name yet,” he said. “The nursing commission is opening (the investigation) because it’s aware of the situation — not under any particular name.”

The hospital will have 45 days to complete a “root cause” analysis of the event, Church said, but that report will not be publicly available.

The teen was autistic and could not tolerate pills or liquid medicine.

The hospital’s medical director said the highly potent narcotics patch should not have been prescribed.

His family filed a lawsuit against the hospital last September.

Update, 11:32a.m., Sept. 29: The family reached a settlement earlier this year, but didn’t disclose the terms.

If these were the only things happening in the resting cell, the resting membrane potential would not be stable, but rather the net movement of potassium ions would cause the membrane potential to change. Ions move not only based on their individual concentration gradients, but they also move based on charge attraction and repulsion. Ions move away from like charges (ex. sodium and potassium ions move away from each other) and move towards opposite charges (ex. potassium ions would move toward chloride ions). The net movement of a particular ion is influenced by its electrochemical gradient (the balance of its concentration gradient and any charge attraction or repulsion).

One final factor also plays a role in determining the RMP. The sodium potassium pump operates continually in living cells. At maximum capacity, it pumps 3 sodium ions out of the cell and 2 potassium ions into the cell, and hydrolyzes 1 ATP to provide the energy for the ion transport.

Neurons can be excited by various stimuli such as light, chemicals, heat or pressure. These stimuli, which are typically received at the dendrites, cause small, localized changes in membrane voltage. The stimuli open ion channels in the membrane, which allows specific ions to flow in or out of the cell. This ion movement produces a change in the membrane voltage around the area of the open channels. These local shifts in membrane potential are called local (or graded) potentials. Local potentials have the following characteristics:

They are graded, which means the change in membrane voltage that occurs is proportional to the size of the stimulus. A stronger stimulus can open more ion channels. A stimulus that lasts for a long time can either open more ion channels or keep channels open for a longer time. In either case, more ions are able to cross the cell membrane, which produces a larger change in membrane voltage.

They are decremental, meaning that the signal grows weaker as it moves farther from the site of stimulation. Ion channels are opened at the site of stimulation and that is where ions move across the cell membrane. As a result, there is a high concentration of ions right around the ion channels. Once the ions cross the membrane, they diffuse away from the channel and there are fewer and fewer ions as they move away from the open channels. Fewer ions results in a smaller change in membrane potential.

They are reversible. If the stimulus comes to an end, the ion channels close and resting membrane potential is re-established before the signal travels very far.

Neurons generally receive multiple stimuli at the same time – some may be excitatory and others inhibitory. The overall response of the neuron will depend on the net effect of all the stimuli. In some cases, the neuron will produce a signal that will travel to other cells. In other cases, no signal will be sent from the neuron.

As the fast Na+ channels are being inactivated, the slow K+ channels are finally opening. This increases the permeability of the membrane to K+. Potassium ions leave the cell moving down their electrochemical gradient, and the efflux of positive charge causes the membrane voltage to return toward the resting membrane potential (repolarization).

The changes in membrane permeability and their relationship to the membrane potential can be seen in the following figure.

The relative refractory period continues from the end of the absolute refractory period until the membrane is no longer hyperpolarized (returns to the resting membrane potential). During hyperpolarization, slow K+ channels are still open, but are in the process of closing. In order to stimulate an action potential during this time, a very strong stimulus is needed to overcome the effect of potassium flowing out of the cell and depolarize the cell.

Previously, we considered the characteristics of local potentials. They are graded, decremental, reversible, and can either excite or inhibit the membrane. In contrast, action potentials are all-or-none, nondecremental, irreversible and always excitatory.

If the membrane reaches threshold, an action potential will be initiated and the signal will be propagated down the entire axon. Once the events are set in motion there is no stopping them. The process is irreversible.

In contrast to local potentials, which can either excite or inhibit the membrane, action potentials are all excitatory (cause an initial depolarization of the membrane).