The nucleus is the largest and most prominent of a cell’s organelles (Figure 1a). The nucleus is generally considered the control center of the cell because it stores all of the genetic instructions for manufacturing proteins. Interestingly, some cells in the body, such as muscle cells, contain more than one nucleus (Figure 1b), which is known as multinucleated. Other cells, such as mammalian red blood cells (RBCs), do not contain nuclei at all. RBCs eject their nuclei as they mature, making space for the large numbers of hemoglobin molecules that carry oxygen throughout the body (Figure 2). Without nuclei, the life span of RBCs is short, and so the body must produce new ones constantly.

Figure 1. The Nucleus in Muscle Cells. (a) The nucleus is the control center of the cell. The nucleus of living cells contains the genetic material that determines the entire structure and function of that cell. (b) Unlike cardiac muscle cells and smooth muscle cells, which have a single nucleus, a skeletal muscle cell contains many nuclei, and is referred to as “multinucleated.” These muscle cells are long and fibrous (often referred to as muscle fibers). During development, many smaller cells fuse to form a mature muscle fiber. The nuclei of the fused cells are conserved in the mature cell, thus imparting a multinucleate characteristic to mature muscle cells. LM × 104.3. (Micrograph provided by the Regents of University of Michigan Medical School © 2012)

Figure 2. Red Blood Cell Extruding Its Nucleus. Mature red blood cells lack a nucleus. As they mature, erythroblasts extrude their nucleus, making room for more hemoglobin. The two panels here show an erythroblast before and after ejecting its nucleus, respectively. (credit: modification of micrograph provided by the Regents of University of Michigan Medical School © 2012)

Inside the nuclear envelope is a gel-like nucleoplasm with solutes that include the building blocks of nucleic acids. There also can be a dark-staining mass often visible under a simple light microscope, called a nucleolus (plural = nucleoli). The nucleolus is a region of the nucleus that is responsible for manufacturing the RNA necessary for construction of ribosomes. 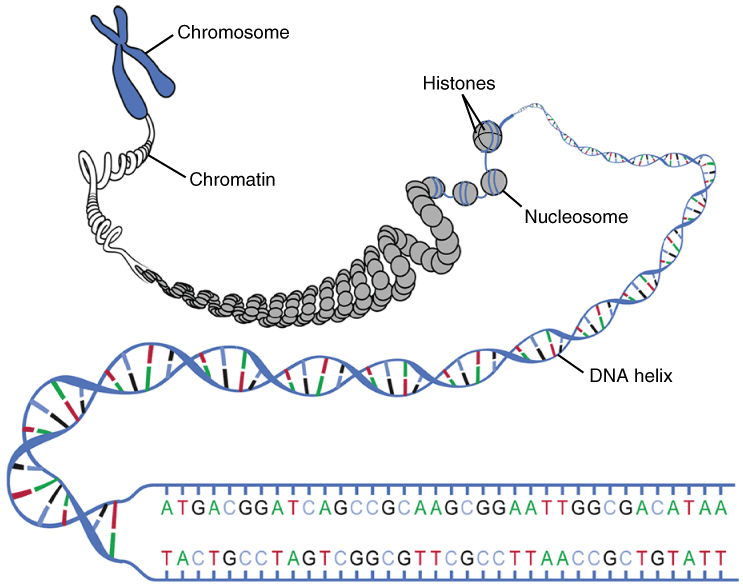 Figure 3. DNA Macrostructure. Strands of DNA are wrapped around supporting histones. These proteins are increasingly bundled and condensed into chromatin, which is packed tightly into chromosomes when the cell is ready to divide.

Once synthesized, newly made ribosomal subunits exit the cell’s nucleus through the nuclear pores. The genetic instructions that are used to build and maintain an organism are arranged in an orderly manner in strands of DNA. Within the nucleus are threads of chromatin composed of DNA and associated proteins (Figure 3).

Along the chromatin threads, the DNA is wrapped around a set of histone proteins. A nucleosome is a single, wrapped DNA-histone complex. Multiple nucleosomes along the entire molecule of DNA appear like a beaded necklace, in which the string is the DNA and the beads are the associated histones. When a cell is in the process of division, the chromatin condenses into chromosomes, so that the DNA can be safely transported to the “daughter cells.”

The chromosome is composed of DNA and proteins; it is the condensed form of chromatin. It is estimated that humans have almost 22,000 genes distributed on 46 chromosomes.

In order for an organism to grow, develop, and maintain its health, cells must replicated themselves by dividing to produce two new daughter cells, each with the full complement of DNA as found in the original cell. Billions of new cells are produced in an adult human every day. There are a few cell types in the body do not divide, including nerve cells, skeletal muscle fibers, and cardiac muscle cells. The division time of different cell types varies. Epithelial cells of the skin and gastrointestinal lining, for instance, divide very frequently to replace those that are constantly being rubbed off of the surface by friction.

A DNA molecule is made of two strands that “complement” each other: the molecules that compose the strands fit together and bind to each other, creating a double-stranded molecule that looks much like a long, twisted ladder. Each side rail of the DNA ladder is composed of alternating sugar and phosphate groups (Figure 4).

Figure 4. Molecular Structure of DNA. The DNA double helix is composed of two complementary strands. The strands are bonded together via their nitrogenous base pairs using hydrogen bonds.

The two sides of the ladder are not identical, but are complementary. These two backbones are bonded to each other across pairs of protruding bases, each bonded pair forming one “rung,” or cross member. The four DNA bases are adenine (A), thymine (T), cytosine (C), and guanine (G). Because of their shape and charge, the two bases that compose a pair always bond together. Adenine always binds with thymine, and cytosine always binds with guanine. The particular sequence of bases along the DNA molecule determines the genetic code. Therefore, if the two complementary strands of DNA were pulled apart, you could infer the order of the bases in one strand from the bases in the other, complementary strand. For example, if one strand has a region with the sequence AGTGCCT, then the sequence of the complementary strand would be TCACGGA.

DNA replication is the copying of DNA that occurs before cell division can take place. After a great deal of debate and experimentation, the general method of DNA replication was deduced in 1958 by two scientists in California, Matthew Meselson and Franklin Stahl. This method is illustrated in Figure 5 and described below. 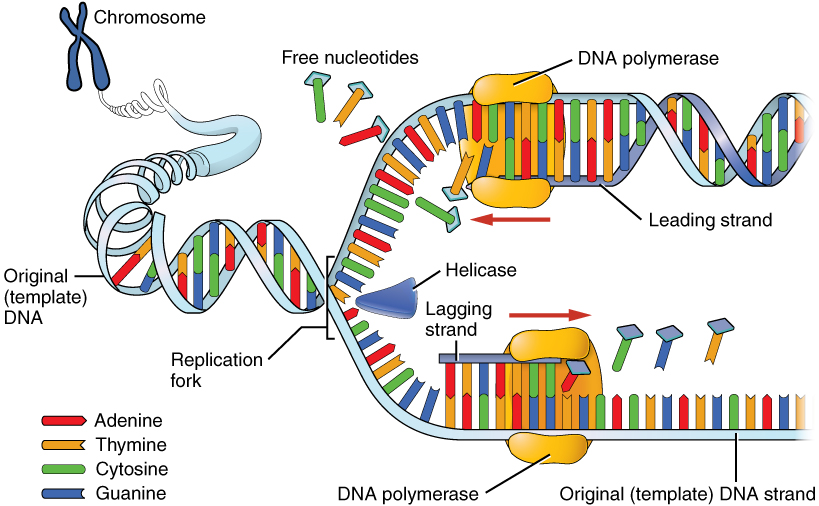 Figure 5. DNA Replication. DNA replication faithfully duplicates the entire genome of the cell. During DNA replication, a number of different enzymes work together to pull apart the two strands so each strand can be used as a template to synthesize new complementary strands. The two new daughter DNA molecules each contain one pre-existing strand and one newly synthesized strand. Thus, DNA replication is said to be “semiconservative.”

The two complementary strands are separated, much like unzipping a zipper. Special enzymes, including helicase, untwist and separate the two strands of DNA.

Once the two original strands are bound to their own, finished, complementary strands, DNA replication is stopped and the two new identical DNA molecules are complete. Each new DNA molecule contains one strand from the original molecule and one newly synthesized strand. The term for this mode of replication is “semiconservative,” because half of the original DNA molecule is conserved in each new DNA molecule. This process continues until the cell’s entire genome, the entire complement of an organism’s DNA, is replicated. As you might imagine, it is very important that DNA replication take place precisely so that new cells in the body contain the exact same genetic material as their parent cells. Mistakes made during DNA replication, such as the accidental addition of an inappropriate nucleotide, have the potential to render a gene dysfunctional or useless. Fortunately, there are mechanisms in place to minimize such mistakes. A DNA proofreading process enlists the help of special enzymes that scan the newly synthesized molecule for mistakes and corrects them. Once the process of DNA replication is complete, the cell is ready to divide. You will explore the process of cell division later in the chapter.