5.2 – Applications of Systems of Linear Equations

A skateboard manufacturer introduces a new line of boards. The manufacturer tracks its costs, which is the amount it spends to produce the boards, and its revenue, which is the amount it earns through sales of its boards. How can the company determine if it is making a profit with its new line? How many skateboards must be produced and sold before a profit is possible? 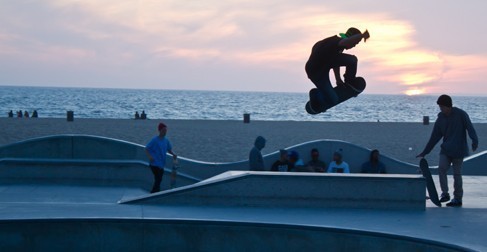 Using what we have learned about systems of equations, we can return to the skateboard manufacturing problem at the beginning of the section. The skateboard manufacturer’s revenue function is the function used to calculate the amount of money that comes into the business. It can be represented by the equation [latex]R=xp[/latex], where [latex]x=[/latex] quantity and [latex]p=[/latex] price. The revenue function is shown in orange in the graph below.

The cost function is the function used to calculate the costs of doing business. It includes fixed costs, such as rent and salaries, and variable costs, such as utilities. The cost function is shown in blue in the graph below. The [latex]x[/latex] -axis represents quantity in hundreds of units. The y-axis represents either cost or revenue in hundreds of dollars. 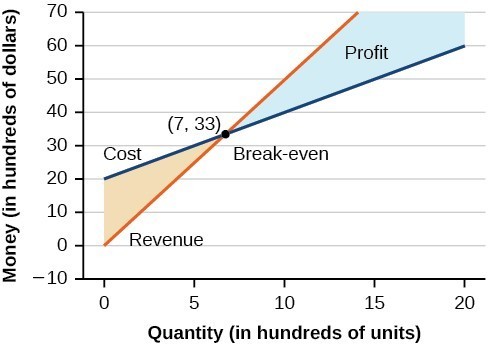 The point at which the two lines intersect is called the break-even point. We can see from the graph that if 700 units are produced, the cost is $3,300 and the revenue is also $3,300. In other words, the company breaks even if they produce and sell 700 units. They neither make money nor lose money.

A business wants to manufacture bike frames. Before they start production, they need to make sure they can make a profit with the materials and labor force they have. Their accountant has given them a cost equation of [latex]y=0.85x+35,000[/latex] and a revenue equation of [latex]y=1.55x[/latex]:

The revenue equation represents money coming into the company, so in this context x still represents the number of bike frames manufactured, and y now represents the amount of money made from selling them.  Let’s organize this information in a table:

Substitute the expression [latex]0.85x+35,000[/latex] from the first equation into the second equation and solve for [latex]x[/latex]. 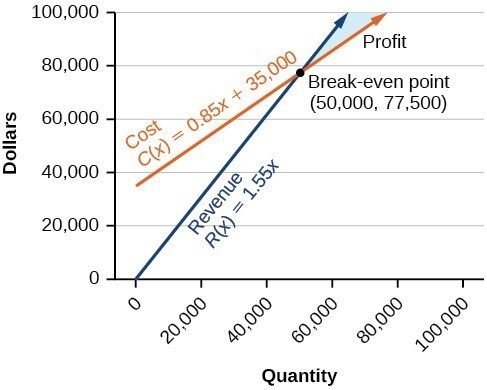 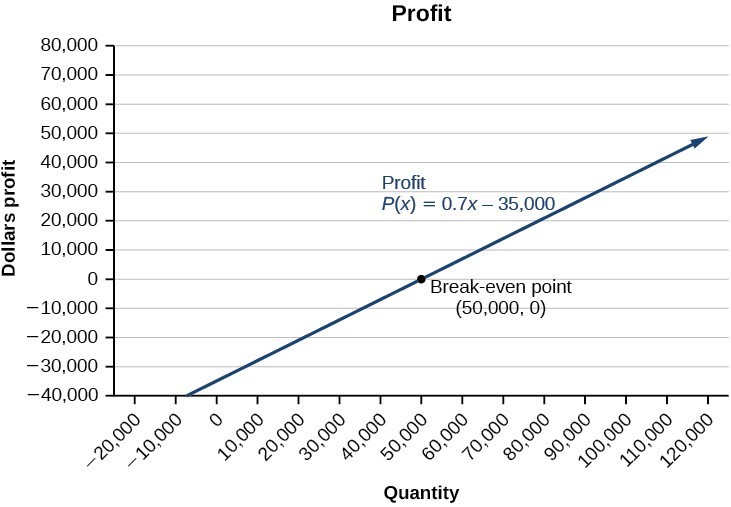 (5.2.2) – Solve value problems with a system of linear equations

It is rare to be given equations that neatly model behaviors that you encounter in business, rather, you will probably be faced with a situation for which you know key information as in the example above. Below, we summarize three key factors that will help guide you in translating a situation into a system.

How To: Given a situation that represents a system of linear equations, write the system of equations and identify the solution.

1) Identify unknown quantities in a problem represent them with variables.

2) Write a system of equations which models the problem’s conditions.

Now let’s practice putting these key factors to work. In the next example, we determine how many different types of tickets are sold given information about the total revenue and amount of tickets sold to an event.

Example: Writing and Solving a System of Equations in Two Variables

We now have a system of linear equations in two variables.

Substitute [latex]c=1,200[/latex] into the first equation to solve for [latex]a[/latex].

We find that [latex]1,200[/latex] children and [latex]800[/latex] adults bought tickets to the circus that day.

In this video example we show how to set up a system of linear equations that represents the total cost for admission to a museum.

Sometimes, a system can inform a decision.  In our next example, we help answer the question, “Which truck rental company will give the best value?”

Example: Building a System of Linear Models to Choose a Truck Rental Company

The two important quantities in this problem are the cost and the number of miles driven. Because we have two companies to consider, we will define two functions.

A linear function is of the form [latex]f\left(x\right)=mx+b[/latex]. Using the rates of change and initial charges, we can write the equations

These graphs are sketched above, with K(d) in blue.

To find the intersection, we set the equations equal and solve:

This tells us that the cost from the two companies will be the same if 100 miles are driven. Either by looking at the graph, or noting that [latex]K\left(d\right)[/latex] is growing at a slower rate, we can conclude that Keep on Trucking, Inc. will be the cheaper price when more than 100 miles are driven, that is [latex]d>100[/latex].

(5.2.3) – Solve mixture problems with a system of linear equations

One application of systems of equations are mixture problems. Mixture problems are ones where two different solutions are mixed together resulting in a new final solution.  A solution is a mixture of two or more different substances like water and salt or vinegar and oil.  Most biochemical reactions occur in liquid solutions, making them important for doctors, nurses, and researchers to understand.  There are many other disciplines that use solutions as well.

The concentration or strength of a liquid solution is often described  as a percentage.  This number comes from the ratio of how much mass is in a specific volume of liquid.  For example if you have 50 grams of salt in a 100mL of water you have a 50% salt solution based on the following ratio:

We will use the following table to help us solve mixture problems:

To demonstrate why the table is helpful in solving for unknown amounts or concentrations of a solution, consider two solutions that are mixed together, one is 120mL of a 9% solution, and the other is 75mL of a 23% solution. If we mix both of these solutions together we will have a new volume and a new mass of solute and with those we can find a new concentration.

First, find the total mass of solids for each solution by multiplying the volume by the concentration.

Next we add the new volumes and new masses.

Now we have used mathematical operations to describe the result of mixing two different solutions. We know the new volume, concentration and mass of solute in the new solution.  In the following examples, you will see that we can use the table to find an unknown final volume or concentration. These problems can have either one or two variables. We will start with one variable problems, then move to two variable problems.

Let’s use the problem solving process outlined in Module 1 to help us work through a solution to the problem.

Read and Understand: We are looking for a new amount – in this case a volume –  based on the words “how much”.  We know two starting  concentrations and the final concentration, as well as one volume.

Write and Solve:  Set up the mixture table. Remember that concentrations are written as decimals before we can perform mathematical operations on them.

Multiply amount by concentration to get total, be sure to distribute on the last row: [latex]\left(70 + x\right)0.6[/latex]Add the entries in the amount column to get final amount. The concentration for this amount is 0.6 because we want the final solution to be 60% methane.

Subtract 35 from both sides

Divide both sides by 0.2

The above problem illustrates how we can use the mixture table to define an equation to solve for an unknown volume. In the next example we will start with two known concentrations and use a system of equations to find two starting volumes necessary to achieve a specified final concentration.

A farmer has two types of milk, one that is 24% butterfat and another which is 18% butterfat. How much of each should he use to end up with 42 gallons of 20% butterfat?

Read and Understand: We are asked to find two starting volumes of milk whose concentrations of butterfat are both known. We also know the final volume is 42 gallons. There are two unknowns in this problem.

Write and Solve: Fill in the table with the information we know.

Find the total mass by multiplying the amount of each solution by the concentration. The total mass of the final solution comes from

Use elimination to find a value for [latex]x[/latex], and [latex]y[/latex].

Multiply the first equation by [latex]-0.18[/latex]

Adding the two equations together to eliminate the y terms gives this equation:

Now substitute the value for x into one of the equations in order to solve for y.

In the following video you will be given an example of how to solve a mixture problem without using a table, and interpret the results.

(5.2.4) – Solve uniform motion problems with a system of linear equations

Many real-world applications of uniform motion arise because of the effects of currents—of water or air—on the actual speed of a vehicle. Cross-country airplane flights in the United States generally take longer going west than going east because of the prevailing wind currents.

Let’s take a look at a boat travelling on a river. Depending on which way the boat is going, the current of the water is either slowing it down or speeding it up.

The boat is going downstream, in the same direction as the river current. The current helps push the boat, so the boat’s actual speed is faster than its speed in still water. The actual speed at which the boat is moving is [latex]b+c[/latex]. 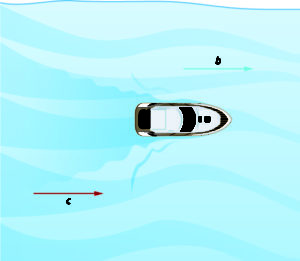 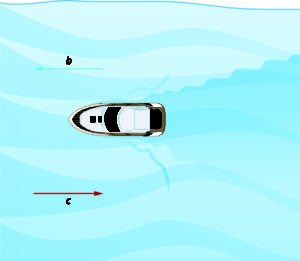 We’ll put some numbers to this situation in the next example.

Translate to a system of equations and then solve.

Read the problem: This is a uniform motion problem and a picture will help us visualize the situation.

Name what we are looking for:

Let [latex]s=[/latex] the rate of the ship in still water.

Let [latex]c=[/latex] the rate of the current.

A chart will help us organize the information. The ship goes downstream and then upstream. Going downstream, the current helps the ship and so the ship’s actual rate is [latex]s+c[/latex]. Going upstream, the current slows the ship and so the actual rate is [latex]s-c[/latex]. Downstream it takes 4 hours. Upstream it takes 5 hours. Each way the distance is 60 miles.

Solve the system of equations. Distribute to put both equations in standard form, then solve by elimination.

Multiply the top equation by 5 and the bottom equation by 4. Add the equations, then solve for [latex]s[/latex].

Substitute [latex]s=13.5[/latex] into one of the original equations.

Check the answer in the problem. The downstream rate would be:

In 4 hours the ship would travel:

The upstream rate would be

In 5 hours the ship would travel

In the next video, we present another example of a uniform motion problem which can be solved with a system of linear equations.