People often expect government to solve problems that they seem unable to solve on their own. Sometimes this is effective and sometimes it is not. Price controls, either price ceilings or price floors, often have unanticipated side effects. Think about it: passing a law doesn’t by itself make economic problems go away! Such is the case with claims of price gouging, the charging of “excessively high” prices, which was exemplified by what occurred in the wake of an ice storm or other natural disasters. 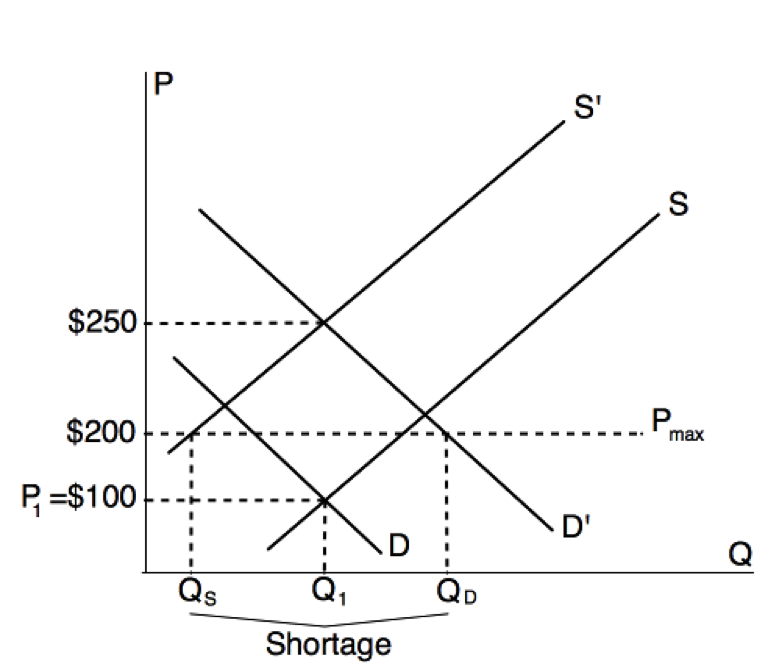 Imposing a price ceiling below the equilibrium price may create as many problems as it solves. The basic problem is that the demand for power generators is dramatically higher, since the supply of electricity was compromised. At the same time, the supply of generators was less as a result of storm damage and the inability to travel. The question is how to deal with the shortage, that is, how to allocate the limited supply of generators among competing needs and wants. When a price ceiling reduces the legal price of a product, businesses have less incentive to supply the product.

Economically speaking, the law of supply says that at lower prices, the quantity supplied will be lower. At the same time, the law of demand states that at a lower price, the quantity demanded will be higher. This can be seen clearly in the graph. So who gets the limited supply? As Shakespeare said, that is the question. Unfortunately, there is no clear answer to this. It could be first come, first serve. It could be friends of the seller. In many cases, what results are under-the-table payments by consumers willing to violate the law. What is certain is that fewer generators get to consumers than would be the case if the price were allowed to rise. Many would argue that this shortage is not the best outcome.