Classroom Management and Why It Matters

Managing the learning environment is both a major responsibility and an on-going concern for all teachers, even those with years of experience (Good & Brophy, 2002).  for many educators and educational psychologists, classroom management is synonymous with classroom control (Bowers & Flinders, 1990; Doyle, 1986). However, as we will see in this chapter, management should include warmth and caring as well as control. Your decisions about classroom arrangement, rules, and routines should reflect a concern for a secure, safe, orderly environment, but not at the expense of communication and trust among your learners. As a new teacher, you will quickly come to realize that warmth and control are not mutually exclusive concerns. Effective teachers who care about their learners inevitably combine the quality of warmth with their efforts to control.

For many years, the concepts of warmth and control were considered to be at opposite ends of the same continuum. If a teacher chose to be warm, he or she could not be in control, and vice versa. However, Soar and Soar (1983) have suggested that different degrees of warmth and control may occur simultaneously, and behavior in one dimension does not necessarily preclude behavior in the other. Although many combinations of warmth and control are possible, four major profiles emerge from this conception of classroom climate, as shown in the figure below. 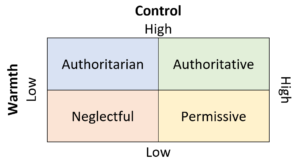 For the dimension of control, student spontaneity, risk-taking behavior, and student-initiated responses characterize low-control climates. Teacher
talk, task orientation, and teacher authority characterize high-control climates. For the dimension of warmth, the use of praise and rewards, use of student ideas, and responsiveness to student requests are associated with high warmth. Frequent reference to formal rules and procedures, use of punishment, and criticism, scolding, and reprimanding are associated with low warmth.

The first is teaching style, authoritarian, which is characterized as cold and controlling. Such a teacher may humiliate and criticize students in an effort to control all aspects of their behavior. Lesser extremes represent a teacher who provides little praise or reward. This style generally results in a classroom climate that is businesslike and task-oriented, with few interchanges with students that are not initiated by the teacher. It also is a classroom in which motivation to do high-level work may be inspired more by a fear of punishment, embarrassment, or, in extreme cases, humiliation than by the expectation of praise, reward, or reinforcement.

The second type of classroom climate is a result of an authoritative teaching style, in which the teacher is warm but in control. Here, classroom rules are mutually determined and a consistently applied system of praise and rewards is used to motivate good behavior, warmth and control may exist simultaneously.

One danger of excessive use of rewards, however, is the creation of an almost suffocating climate in which students have little if any room to pursue a behavior or activity independently. In such a classroom, only those behaviors that the teacher has previously identified are eligible for a reward—all others are deemed less worthy. As Soar and Soar (1983) have noted, this may create a classroom climate in which students have little room to pursue independent behavior because of the tightly managed praise and reward system established by the teacher.

A third classroom climate is characterized by a permissive teaching style, in which the teacher is warm and permissive. A teacher who falls at the lower right corner of this quadrant is one who praises and rewards students frequently while allowing them almost complete freedom in choosing the
limits of their own behavior, sometimes resulting in confusion.

A lesser extreme of this quadrant may represent a classroom in which praise and rewards are used freely but student spontaneity (for example, calling out) and risk-taking behavior are limited to certain times (for example, group discussion, problem-solving activities) or certain types of content (for example, social studies but not math). During these times the teacher acts as a moderator or co-discussant, guiding and directing but not controlling classroom behavior. In such a classroom, students have considerable freedom in how and when to speak, and the teacher’s warm and nurturing attitude is conveyed mostly nonverbally, through a set of classroom rules that encourage individual initiative.

The fourth style, neglectful, represents a classroom that is cold yet permissive. A teacher who falls at the lower-left corner of this quadrant is one who spends most of the time scolding and criticizing students but has few classroom rules to control or limit the behavior being criticized. Such an extreme climate sometimes prevails in a classroom where a substitute teacher takes over without warning. In such a classroom, students may use the teacher’s unfamiliarity with the rules as an opportunity to act out, thereby initiating scolding or criticizing behavior. Since the substitute teacher is unfamiliar with the classroom rules, he cannot fall back on the established system to prevent misbehavior. And because the substitute’s role is to keep order, not to create or discover the rules, much of his behavior is an attempt to “hold the line” by criticizing, reprimanding, and punishing, if need be, in order to keep the class under control.

In less extreme form, a classroom with lead by this teacher may be characterized by some coverage of content, interspersed with delays for classroom management of misbehavior. In general, this quadrant shows both a lack of task orientation and teacher control over the subject matter
content and a high frequency of scolding, criticizing, and reprimanding.

An effective classroom management plan blends warmth and control in ways that preclude overly rigid, dictatorial, or authoritarian forms of control, using instead a mutually agreed-upon set of rules and a well-defined and consistently applied system of praise and rewards. In other words, an effective plan combines strikes a balance of warmth with control. In this chapter, we will show you how to create this balance to build an effective classroom management plan.

Managing the learning environment is both a major responsibility and an on-going concern for all teachers, even those with years of experience (Good & Brophy, 2002). There are several reasons. In the first place, a lot goes on in classrooms simultaneously, even when students seem to be doing only one task in common. Twenty-five students may all seem to be working on a sheet of math problems. But look more closely: several may be stuck on a particular problem, each for different reasons. A few others have worked only the first problem or two and are now chatting quietly with each other instead of continuing. Still others have finished and are wondering what to do next. At any one moment, each student needs something different—different information, different hints, different kinds of encouragement. Such diversity increases even more if the teacher deliberately assigns multiple activities to different groups or individuals (for example, if some students do a reading assignment while others do the math problems).

A major reason that managing the environment is challenging is because a teacher can not predict everything that will happen in a class. A well-planned lesson may fall flat on its face, or take less time than expected, and you find yourself improvising to fill class time. On the other hand, an unplanned moment may become a wonderful, sustained exchange among students, and prompt you to drop previous plans and follow the flow of discussion. Interruptions happen continually: a fire drill, a drop-in visit from another teacher or the principal, a call on the intercom from the office. An activity may indeed turn out well, but also rather differently than you intended; you, therefore, have to decide how, if at all, to adjust the next day’s lesson to allow for this surprise.

A third reason for the importance of management is that students form opinions and perceptions about your teaching that are inconsistent with your own. What you intend as encouragement for a shy student may seem to the student herself like “forced participation.” An eager, outgoing classmate watching your effort to encourage the shy student, moreover, may not see you as either encouraging or coercing, but as overlooking or ignoring other students who already want to participate. The variety of perceptions can lead to surprises in students’ responses—most often small ones, but occasionally major.

At the broadest, society-wide level, classroom management challenges teachers because public schooling is not voluntary, and students’ presence in a classroom is therefore not a sign, in and of itself, that they wish to learn. Instead, students’ presence is just a sign that an opportunity exists for teachers to motivate students to learn. Some students, of course, do enjoy learning and being in school, almost regardless of what teachers do! Others do enjoy school, but only because teachers have worked hard to make classroom life pleasant and interesting. Those students become motivated because you have successfully created a positive learning environment and have sustained it through skillful management.

Fortunately, it is possible to earn this sort of commitment from many students, and this chapter describes ways of doing so. We begin with ways of preventing management problems from happening by increasing students’ focus on learning. The methods include ideas about arranging classroom space, about establishing procedures, routines, and rules, and about communicating the importance of learning to students and parents. After these prevention-oriented discussions, we look at ways of refocusing students when and if their minds or actions stray from the tasks at hand. As you probably know from being a student, bringing students back on task can happen in many ways, and the ways vary widely in the energy and persistence required of the teacher. We try to indicate some of these variations, but because of space limitations and because of the richness of classroom life, we cannot describe them all.