Goal setting is a key motivational process (Locke & Latham, 1984). Goals are the outcome that a person is trying to accomplish. People engage in activities that are believed to lead to goal attainment. As learners pursue multiple goals such as academic goals and social goals, goal choice and the level at which learners commit to attaining the goals influence their motivation to learn (Locke & Latham, 2006; Wentzel, 2000).

Besides goal content (i.e., what a person wants to achieve), the reason that a person tries to achieve a certain goal also has a significant influence on learning and performance. Goal orientations refer to the reasons or purposes for engaging in learning activities and explain individuals’ different ways of approaching and responding to achievement situations (Ames & Archer, 1988; Meece, Anderman, & Anderman, 2006). The two most basic goal orientations are mastery and performance goals (Ames & Archer, 1988). Different researchers refer to these goals with the following terms: learning and performance goals (Elliot & Dweck, 1988), task-involved and ego-involved goals (Nicholls, 1984), and task-focused and ability-focused goals (Maehr & Midgley, 1991). A mastery goal orientation is defined as a focus on mastering new skills, trying to gain increased understanding, and improving competence (Ames & Archer, 1988). Students adopting mastery goals define success in terms of improvement and learning. In contrast, a performance goal orientation focuses on doing better than others and demonstrating competence, for example, by striving to best others, using social comparative standards to make judgments about their abilities while seeking favorable judgment from others (Dweck & Leggett, 1988).

Studies typically report that mastery-approach goals are associated with positive achievement outcomes such as high levels of effort, interest in the task, and use of deep learning strategies (e.g., Greene, Miller, Crowson, Duke, & Akey, 2004; Harackiewicz, Barron, Pintrich, Elliot, & Thrash, 2002; Wolters, 2004). On the other hand, research on performance-avoidance goals has consistently reported that these goals induced detrimental effects, such as poor persistence, high anxiety, use of superficial strategies, and low achievement (Linnenbrink, 2005; Urdan, 2004; Wolters, 2003, 2004). With regard to performance-approach goals, the data have yielded a mix of outcomes. Some studies have reported modest positive relations between performance-approach goals and achievement (Linnenbrink-Garcia, Tyson, & Patall, 2008). Others have found maladaptive outcomes such as poor strategy use and test anxiety (Keys, Conley, Duncan, & Domina, 2012; Elliot & McGregor, 2001; Middleton & Midgley, 1997). Taken together, these findings suggest that students who adopt performance-approach goals demonstrate high levels of achievement but experience negative emotionality such as test anxiety. Mastery-avoidance goals are the least studied goal orientation thus far. However, some studies have found mastery-avoidance to be a positive predictor of anxiety and a negative predictor of performance (Howell & Watson, 2007; Hulleman, Schrager, Bodmann, & Harackiewicz, 2010). 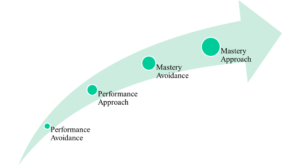 Figure 6.11.1. The likelihood of goal success is influenced by the goal orientation. Mastery-approach goals are most likely to be successful, performance-avoidance goals are least likely.

Goals that Contribute to Achievement

What kinds of achievement goals do students hold? Imagine three individuals, Maria, Sara, and Lindsay, who are taking algebra together. Maria’s main concern is to learn the material as well as possible because she finds it interesting and because she believes it will be useful to her in later courses, perhaps at university. Hers is a mastery goal because she wants primarily to learn or master the material. Sara, however, is concerned less about algebra than about getting top marks on the exams and in the course. Hers is a performance goal because she is focused primarily on looking successful; learning algebra is merely a vehicle for performing well in the eyes of peers and teachers. Lindsay, for her part, is primarily concerned about avoiding a poor or failing mark. Hers is a performance-avoidance goal or failure-avoidance goal because she is not really as concerned about learning algebra, as Maria is, or about competitive success, as Sara is; she is simply intending to avoid failure.

As you might imagine, mastery, performance, and performance-avoidance goals often are not experienced in pure form, but in combinations. If you play the clarinet in the school band, you might want to improve your technique simply because you enjoy playing as well as possible—essentially a mastery orientation. But you might also want to look talented in the eyes of classmates—a performance orientation. Another part of what you may wish, at least privately, is to avoid looking like a complete failure at playing the clarinet. One of these motives may predominate over the others, but they all may be present.

Mastery goals tend to be associated with the enjoyment of learning the material at hand, and in this sense represent an outcome that teachers often seek for students. By definition therefore they are a form of intrinsic motivation. As such mastery goals have been found to be better than performance goals at sustaining students’ interest in a subject. In one review of research about learning goals, for example, students with primarily mastery orientations toward a course they were taking not only tended to express greater interest in the course, but also continued to express interest well beyond the official end of the course, and to enroll in further courses in the same subject (Harackiewicz, et al., 2002; Wolters, 2004).

Performance goals, on the other hand, imply extrinsic motivation and tend to show the mixed effects of this orientation. A positive effect is that students with a performance orientation do tend to get higher grades than those who express primarily a mastery orientation. The advantage in grades occurs both in the short term (with individual assignments) and in the long term (with overall grade point average when graduating). But there is evidence that performance-oriented students do not actually learn the material as deeply or permanently as students who are more mastery-oriented (Midgley, Kaplan, & Middleton, 2001). A possible reason is that measures of performance—such as test scores—often reward relatively shallow memorization of information and therefore guide performance-oriented students away from processing the information thoughtfully or deeply. Another possible reason is that a performance orientation, by focusing on gaining recognition as the best among peers, encourages competition among peers. Giving and receiving help from classmates is thus not in the self-interest of a performance-oriented student, and the resulting isolation limits the student’s learning.

As we mentioned, failure-avoidant goals by nature undermine academic achievement. Often they are a negative byproduct of the competitiveness of performance goals (Urdan, 2004). If a teacher (and sometimes also fellow students) put too much emphasis on being the best in the class, and if interest in learning the material as such therefore suffers, then some students may decide that success is beyond their reach or may not be desirable in any case. The alternative—simply avoiding failure—may seem wiser as well as more feasible. Once a student adopts this attitude, he or she may underachieve more or less deliberately, doing only the minimum work necessary to avoid looking foolish or to avoid serious conflict with the teacher. Avoiding failure in this way is an example of self-handicapping—deliberate actions and choices that the reduce chances of success. Students may self-handicap in a number of ways; in addition to not working hard, they may procrastinate about completing assignments, for example, or set goals that are unrealistically high.

Most students need and value relationships, both with classmates and with teachers, and often (though not always) they get a good deal of positive support from the relationships. But the effects of social relationships are complex, and at times can work both for and against academic achievement. If a relationship with the teacher is important and reasonably positive, then the student is likely to try pleasing the teacher by working hard on assignments (Dowson & McInerney, 2003). Note, though, that this effect is closer to performance than mastery; the student is primarily concerned about looking good to someone else. If, on the other hand, a student is especially concerned about relationships with peers, the effects on achievement depend on the student’s motives for the relationship, as well as on peers’ attitudes. Desiring to be close to peers personally may lead a student to ask for help from, and give help to peers—a behavior that may support higher achievement, at least up to a point. But desiring to impress peers with skills and knowledge may lead to the opposite: as we already mentioned, the competitive edge of such a performance orientation may keep the student from collaborating, and in this indirect way reduce a student’s opportunities to learn. The abilities and achievement motivation of peers themselves can also make a difference, but once again the effects vary depending on the context. Low achievement and motivation by peers affects an individual’s academic motivation more in elementary school than in high school, more in learning mathematics than learning to read, and more if their is a wide range of abilities in a classroom than if there is a more narrow range (Burke & Sass, 2006).

In spite of these complexities, social relationships are valued so highly by most students that teachers should generally facilitate them, though also keep an eye on their nature and their consequent effects on achievement. As we explain further, many assignments can be accomplished productively in groups, for example, as long as the groups are formed thoughtfully; in that chapter we discuss some ways of insuring that such groups are successful, such as by choosing group tasks wisely and recognizing all members’ contributions are fully as possible. Relationships can also be supported with activities that involve students or adults from another class or from outside the school, as often happens with school or community service projects. These can provide considerable social satisfaction and can sometimes be connected to current curriculum needs (Butin, 2005). But the majority of students’ social contacts are likely always to come from students’ own initiatives with each other in simply taking time to talk and interact. The teacher’s job is to encourage these informal contacts, especially when they happen at times that support rather than interfere with learning.

Even though a degree of performance orientation may be inevitable in school because of the mere presence of classmates, it does not have to take over students’ academic motivation completely. Teachers can encourage mastery goals in various ways, and should in fact do so because a mastery orientation leads to more sustained, thoughtful learning, at least in classrooms, where classmates may sometimes debate and disagree with each other (Darnon, Butera, & Harackiewicz, 2006).

How can teachers do so? One way is to allow students to choose specific tasks or assignments for themselves, where possible, because their choices are more likely than usual to reflect prior personal interests, and hence be motivated more intrinsically than usual. The limitation of this strategy, of course, is that students may not see some of the connections between their prior interests and the curriculum topics at hand. In that case it also helps for the teacher to look for and point out the relevance of current topics or skills to students’ personal interests and goals. Suppose, for example, that a student enjoys the latest styles of music. This interest may actually have connections with a wide range of school curriculum, such as:

Still another way to encourage mastery orientation is to focus on students’ individual effort and improvement as much as possible, rather than on comparing students’ successes to each other. You can encourage this orientation by giving students detailed feedback about how they can improve performance, or by arranging for students to collaborate on specific tasks and projects rather than to compete about them, and in general by showing your own enthusiasm for the subject at hand.