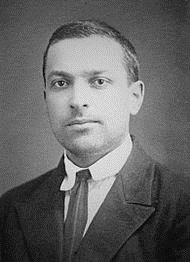 Lev Vygotsky (1896-1934) was a Russian psychologist whose sociocultural theory emphasizes the importance of culture and interaction in the development of cognitive abilities. Vygotsky differed with Piaget in that he believed that a person has not only a set of abilities but also a set of potential abilities that can be realized if given the proper guidance from others. Vygotsky developed theories on teaching that have been adopted by educators today.

Like Piaget, Vygotsky acknowledged intrinsic development, but he argued that it is the language, writings, and concepts arising from the culture that elicit the highest level of cognitive thinking (Crain, 2005). He believed that social interactions with teachers and more learned peers could facilitate a learner’s potential for learning. Without this interpersonal instruction, he believed learner’s minds would not advance very far as their knowledge would be based only on their own discoveries.

Zone of Proximal Development and Scaffolding

Vygotsky’s best-known concept is the Zone of Proximal Development (ZPD). The ZPD has been defined as “the distance between the actual developmental level as determined by independent problem solving and the level of potential development as determined through problem-solving under adult guidance, or in collaboration with more capable peers” (Vygotsky, 1978, p. 86). Vygotsky stated that learners should be taught in the ZPD. A good teacher or more-knowledgable-other (MKO) identifies a learner’s ZPD and helps them stretch beyond it. Then the MKO gradually withdraws support until the learner can perform the task unaided.  Other psychologists have applied the metaphor of scaffolds (the temporary platforms on which construction workers stand) to Vygotsky’s theory. Scaffolding is the temporary support that a MKO gives a learner to do a task. 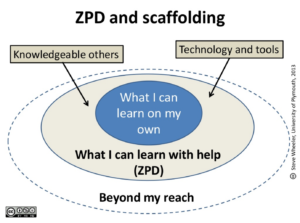 Do you ever talk to yourself? Why? Chances are, this occurs when you are struggling with a problem, trying to remember something, or feel very emotional about a situation. Children talk to themselves too. Piaget interpreted this as egocentric speech or a practice engaged in because of a child’s inability to see things from another’s point of view. Vygotsky, however, believed that children talk to themselves in order to solve problems or clarify thoughts. As children learn to think in words, they do so aloud, referred to as private speech, speech meant only for one’s self. Eventually, thinking out loud becomes thought accompanied by internal speech, and talking to oneself becomes a practice only engaged in when we are trying to learn something or remember something. This inner speech is not as elaborate as the speech we use when communicating with others (Vygotsky, 1962).

Vygotsky’s theories have been extremely influential for education. Although Vygotsky himself never mentioned the term scaffolding, it is often credited to him as a continuation of his ideas pertaining to the way adults or other children can use guidance in order for a child to work within their ZPD. (The term scaffolding was first developed by Jerome Bruner, David Wood, and Gail Ross while applying Vygotsky’s concept of ZPD to various educational contexts.)

Educators often apply these concepts by assigning tasks that students cannot do on their own, but which they can do with assistance; they should provide just enough assistance so that students learn to complete the tasks independently and then provide an environment that enables students to do harder tasks than would otherwise be possible. Teachers can also allow students with more knowledge to assist students who need more guidance. Especially in the context of collaborative learning, group members who have higher levels of understanding can help the less advanced members learn within their zone of proximal development.

Video 3.7.1. Vygotsky’s Developmental Theory introduces the applications of the theory in the classroom.

Piaget was highly critical of teacher-directed instruction believing that teachers who take control of the child’s learning place the child into a passive role (Crain, 2005). Further, teachers may present abstract ideas without the child’s true understanding, and instead, they just repeat back what they heard. Piaget believed children must be given opportunities to discover concepts on their own. As previously stated, Vygotsky did not believe children could reach a higher cognitive level without instruction from more learned individuals. Who is correct? Both theories certainly contribute to our understanding of how children learn.